What is the picture that the pilots touch in BSG?

There is a certain picture in Battlestar Galactica that, whenever we see it, someone is touching it in some way, like they are showing respect. What is that picture? 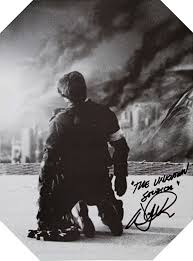 In Season 1 Episode 1 "33", we see the Pilots of Galactica touching a photo of a lone soldier — kneeling in utter defeat surveying a scene of total devastation in front of him — as they file out of the Pilot’s Ready Room. This photo has become known by the description used by the BSG Production Department as the “Unknown Soldier” photo. 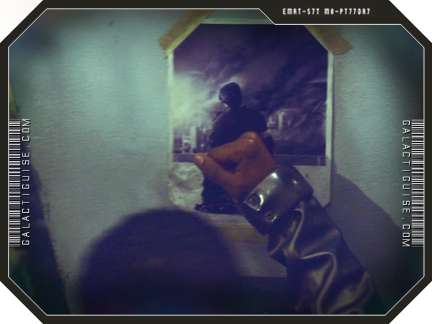 There was a scene cut from “33″ where we saw Laura being given her copy of the photo along with a card that said it was taken on the roof of the capitol building on Aerilon during the attack. The photo was inspired by the famous shot of the fire-fighters raising the flag at Ground Zero that became iconic. I thought the Colonies would have their own version of this — a snapshot taken in the moment that becomes a symbol of the day they can never forget and of all they had lost. The photo itself is of a soldier falling to his knees — possibly shot or simply overcome by emotion — as he stands on the rooftop over looking the devastation of his city, while the Colonial flag waves at the edge of frame. The inscription below the photo on Laura’s plaque reads, “Lest We Forget” in itself a reference to the inscription on the watch presented to John Wayne’s character in “She Wore a Yellow Ribbon." 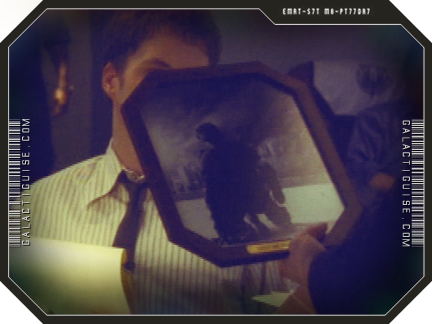 The original base photo for the image was taken at the Vancouver Film Studio’s helipad situated on the roof of building C. This was the building that housed the Battlestar Galactica production offices. The photo clearly shows the Vancouver Film Studio flags in the background along with the “Kobol” flag (which was later rotated and moved to the right) flying above the soldier’s head. 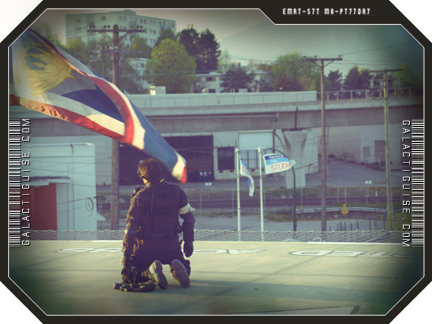 The picture is there to remind every person on Galactica about their losses and their lives before the attacks on Caprica.

23
What are the names of the 12 original Battlestars?
7
Why Didn't the "Final Five" Program a Respect for Humans in Humaniform Cylons?
29
What does the code 1123, 6536, 5321 have to do with music?
6
What is the command structure of Battlestar Galactica marines?
22
Why sacrifice Pegasus?
6
How would the act of networking Galactica's computers allow the introduction of a computer virus?
4
What is the ten minutes?
7
Where does everyone get all the alcohol?
14
Why is the Gayatri mantra used the BSG opening theme? Are the Cylons or the Colonists Hindu?
6
What's the purpose of the Cylon "transponder" from the BSG Miniseries?