The longer I go the more spoilers will appear as I recall more things.

So the story starts with the protagonist being a young boy living in a smallish community of houses floating on the sea (ocean?). His older brother was pretty religious, but our protag isn't. Turns out the brother became so religious after nearly drowning, which was done on purpose with weights attached. This is pretty taboo and frowned upon, but among those who do it, many do become religious and one with god etc. The community uses sentient-y/living-y boats (sufficiently advanced technology). I think the church they have their sermons at was made out of hundreds of those boats they use. Also at one point during his childhood, our protag gets split from his brother and nearly gets lost after he escapes someone by diving into the water.

I think the longer the story goes on, the more we find out that everyone on the planet is descended from an interstellar arkship, but they kinda forgot about it. The most saintly person in the church is the captain of that arkship? Also pretty sure she could edit genes using some technology that was on that starship and so all the people on the planet are descendants of edited people.

The protag gets older and visits a nearby island (could be continent, the point is that it's not the floating sea community anymore), I think for a wedding (his brother's and his also Drowned girlfriend?). There he meets a girl and we learn that when people on this planet have sex, they swap genitals, which causes problems after the girl the protag meets turns out to not be as religious as him after they already have had sex. Anyway, they swap back (so no one finds out that he had pre-marital sex).

Now there's some gaps in my memory, so I'll only say the plot points that I think were actually in the story :P So some years pass and our protag becomes a (micro)biologist, living on land. Has to work on some bacterium no one cares about, which he doesn't like that much. Later on, he or some other researcher finds out that there are bacteria living in the sea that make people feel super good and they somehow activate when people nearly drown. So that shatters his religious beliefs and he either loses them forever or regains a semblance right at the end of the story.

Also at some point the protag's mother is on her death bed. The brother never wavered from his faith and this causes some disagreement with the brother. (The brother either doesn't care about his heathen mum, or he's unfazed because she'll just move on to the afterlife. Either way, the point is that they disagree before she does finally die)

A scene that maybe happens that I am much less sure about:

I think after this discovery our protag visits a lake full of the stuff. A local man(men? a couple?) lives there and is the keeper of the lake and guides people into something like a baptism. For some reason our protag goes into the lake, which the guardian is wary about, because he thinks the lake will hurt/kill our protag, because the concentration is too potent. Our protag has high tolerance because of his childhood experiences, and survives.

Could this be Oceanic? 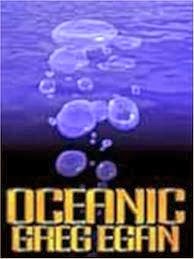 They swap genitals after sex.

I said, “We’ve exchanged the bridge. It doesn’t matter that we weren’t married first, but it would make things easier if we went along with convention.” “Martin — ”

There are bacteria that make people feel super good.

I started laughing and weeping at the same time. It was almost unimaginable: all the millions of people who’d been misled the same way. All because of the zooytes, and … what? One Freelander, diving for pleasure, who’d stumbled on a strange new experience? Then tens of thousands more repeating it, generation after generation — until one vulnerable man or woman had been driven to invest the novelty with meaning. Someone who’d needed so badly to feel loved and protected that the illusion of a real presence behind the raw emotion had been impossible to resist. Or who’d desperately wanted to believe that — in spite of the Angels’ discovery that they, too, were mortal — death could still be defeated.

Near the end he goes to a pool where people are baptized.

I stood at the back of the crowd that had gathered on the beach near the rock pool, to listen to the two old men who were standing ankle-deep in the milky water. It had taken me four days to get here from Mitar, but when I’d heard reports of a zooyte bloom washing up on the remote north coast, I’d had to come and see the results for myself. The zooamine group had actually recruited an anthropologist for such occasions — one who could cope with such taxing notions as the existence of objective reality, and a biochemical substrate for human thought — but Céline was only with us for part of the year, and right now she was away doing other research.

“This is an ancient, sacred place!” one man intoned, spreading his arms to take in the pool. “You need only observe the shape of it to understand that. It concentrates the energy of the stars, and the sun, and the ocean.” “The focus of power is there, by the inlet,” the other added, gesturing at a point where the water might have come up to his calves. “Once, I wandered too close. I was almost lost in the great dream of the ocean, when my friend here came and rescued me!”

11
Help Identifying fantasy novel about magic red jewel
8
I'm looking for a movie about a weird religious journey
17
Short Story About an AI Learning in a Child's Body
10
Story About People Who Hide Out in A Bomb Shelter Under a Mall
13
Short story about a sociopath funeral director on a planet where goo makes birds sick
7
Novel about a king's sons and daughters competing for the throne through trials where the last man standing wins
6
Book about a world where there is a limited amount of souls
20
Short story about intelligent lobsters on a religious pilgrimage
16
What is this science fiction short story about sex determined at puberty, and three genders?