YA novel about time travel and a strange box

This book is about two siblings, a white boy and girl. They live in Newfoundland. They find in their house, somehow, a strange box with knobs and a strange purplish light coming out from the bottom. They take it outside one night and start fiddling with it. One knob makes time go backwards (like in The Time Machine). When they stop it, they find themselves several hundred years in the past, in the time of the Beothuks. They are captured by a tribe and lose the box. They are almost roasted while tied to a pole, before they escape and recover the box. They are successful in returning to the time they left, but a little later. Later when their father is digging in the garden, he digs up the tool they used to escape from the pole.

They later learn that their (parents? grandparents?) know full well what the box is for and give them the instruction manual for it, which implies a sequel.

The cover shows them kneeling outside, among the pines, with the box in front of them, emitting the purple light, which outlines them. The cover is otherwise black. Title and author at the top of the cover, in blue.

The book was probably printed in the early 1990s. I read it at my school and also saw a copy in a local bookstore. It may have been printed in Canada or Newfoundland. The title was short, no more than two or three words. The authors name was two words.

It was at least an inch thick, no more than a hundred pages, softcover. There was a map showing where they lived (I think) It is not Blood Red Ochre.

The cover art certainly matches the description in the question: Two children, a black box that emits purple light, pines, and so forth. 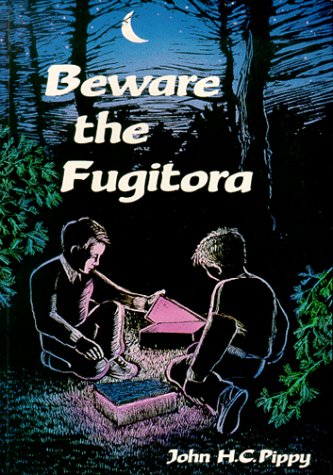 According to the description here, the titular fugitora is indeed a time travel device. As mentioned in the question, the children also meet the Beothuks:

John H. C. Pippy's Beware the Fugitora (Breakwater, 1989) is the story of two boys who find an alien time travel device, a fugitora. The boys use the device to travel to the past where they meet Beothuck Indians. The boys' travel to the past gets them into a life threatening predicament. The alien owners of the fugitora save the boys, return the boys to their own time, and scold them for using something about which they know nothing.

The children probably are "almost roasted." From the same source:

The characterization in Beware the Fugitora is poor and stereotypical. The Beothuks are depicted as bloodthirsty savages who are planning to sacrifice the boys.

Not the answer you're looking for? Browse other questions tagged story-identification time-travel young-adult or ask your own question.

29
Name of a sci-fi story about time travel
12
Young adult novel about time travel
33
Title of a time travel movie involving a boy in alien armor and a girl?
8
What story has special forces agents who mentally travel back in time to avoid being killed?
20
Book of sci-fi short stories containing time machines, strange planets and civilisations
26
TV episode or movie where people on planet only live a hundred days and fall asleep at prescribed time
5
Collection of horror stories: Girl gets cursed, mind-reading ring; man dreams of old woman in tower
25
Time travel "viewer" device discovers a spaceship on ancient Earth
25
Why did Dumbledore pretend to not understand post-time-travel Harry and Hermione?