How many Sith can there be?

If reference to Sith, Yoda said:

Always two there are, no more, no less. A master and an apprentice 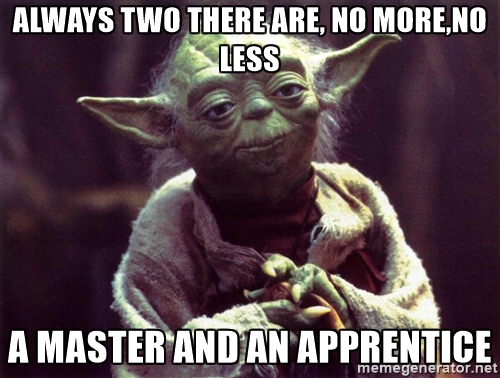 Yet, the same can be said of Jedi: Every master has 1 apprentice and every apprentice 1 master:

However, there is more than one Jedi Master/Padawan combination. Can the same be true of Sith without making Yoda a liar?

The reason for this question is: I saw this quote on Star Wars' Wiki

"The Dark Lords of the Sith are destined to rise again."

There can always be more than two Sith. This was simply the Sith rule that had been applied for (1000?) years. Darth Bane introduced the Rule of Two so that the Sith may become stronger. At the time there were many more Sith. Bane felt that it made them weak, since they didn't strive to be as powerful as they could be. There are many instances in legends where Sith masters during the time of the Rule of two had multiple apprentices and pitted them against each other. Yoda is simply referring to the rule that he has most likely learned sometime during his long life.

The Databank, among other sources, suggests that Yoda was reasonably well-informed about the way the Sith operate:

An ancient and legendary Sith Lord, it was Darth Bane who saw that the Sith traditions of old were ultimately a dead end. All too often, squabbling Sith in their bid for power upended carefully laid plans. After the Sith were decimated by the Jedi Knights of a thousand years ago, Bane enacted the Sith rule of two: there would be only two active Sith at one time – a Dark Lord to embody the power, and an apprentice to crave it.

There are two, and only two, active Sith at a time. While Vader bent the rules a bit by having non-Sith Inquisitors, and Dooku by training Asajj Ventress as an assassin (and perhaps later as an actual Sith), this is nonetheless the rule they purport to follow.

The interpretation in the question also doesn’t seem like a natural interpretation of what Yoda is saying: he does, after all, say “no more, no less.”

63
Does the Rule of Two Serve any Actual Purpose?
4
How many Sith masters obeyed the “Rule of Two”?

53
When did Qui-Gon Jinn defy the council before?
5
Is there a test or trial to become a padawan?
7
Why couldn't Liam Neeson appear in more Star Wars movies?
6
Is there evidence that Lucas intentionally introduced similarities between Episodes I and IV?
14
Was Anakin ever better than Yoda with the lightsaber?
13
Why didn't Obi-Wan take another apprentice during the Clone Wars? (after Anakin became a Knight)
24
Has Qui-Gon ever visibly appeared as a Force ghost?
9
What led Qui-Gon to conclude that Darth Maul was a Sith?
3
Can a Padawan be taken from their Jedi Instructor?