I read this book in the 1980s. A contemporary dark fantasy book set in modern times. The supernatural villain is some kind of demon that has been around forever. He might be called Lord Umbra? Or Lord Ombra? Something like that. Title of the book could be the name of the villain.

The plot is that since forever, once a generation this demon comes back into the world and has a secret battle with a chosen hero who is aware since birth that it will be his destiny to fight the demon. If the hero wins, the world becomes a better happier place. If the demon wins, the world becomes a darker nastier place. One minor plot point was that World War 2 was supposedly caused by that generation's hero losing their battle.

Making things more difficult for the current hero is that the battle has been started too soon. Normally the battle doesn't start until the hero has reached adulthood, but in this cycle it has started while the hero is still a young boy.

The hero has an unusual physical tell: he has no indent above his upper lip like most people do. The explanation reuses some jewish mythology: before birth, the soul knows all sorts of secrets, but at birth an angel presses a fingertip just above one's lip, which erases their memory and creates the dent above the upper lip. However with the chosen hero, the angel does not do this and so they have no dent and remember all the secrets including that it will be their destiny to battle the demon.

At the end of the book, after the demon was defeated, an angel appeared and pressed a finger on his lip and thereafter he had the dent and all memory of the battle was erased and he went on to live a normal life.

I remember thinking it was very like books by Stephen King or Peter Straub that also have young boys battling some supernatural antagonist.

Prince Ombra by Roderick MacLeish. 1982. The boy is Bentley Ellicott; he is a warrior of the borrowed heart. He also has a twisted leg.

...This is why we have a cleft on our upper lips and remember nothing of where we came from. Towards the end of the last century- in 1978, to be precise-a smooth-lipped boy appeared in the world...

...just before we are born, a cavern angel holds his finger to our mouths and whispers, "Hush! Don't tell what you know.

At the moment of [the stone's] finding by a smooth-lipped one, Prince Ombra is summoned from his kingdom of dark winds and re-enters the world to resume his war with god the nameless who is all the gods ever worshiped by the devout of heart. 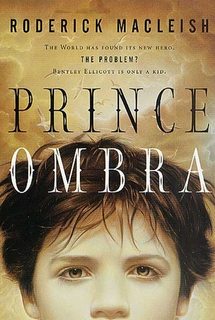 Not the answer you're looking for? Browse other questions tagged story-identification books demons or ask your own question.

13
What novel series has a young boy travelling across space with librarians and a bat-like dog?
9
Last line: “I've finally gotten down to The Basics!”
12
What vampire movie is this?
16
Story about a man helping hell to reverse the apocalypse
7
Weird West novel from the mid-90s
5
2000s SF series about exploration and escaping from dangers, including a humanoid bird species
6
1960s Sci-Fi/Horror Movie ID from Dramatic Final Scene