The reason I ask is because no matter how fast he can move, he needs something to push against.

I am assuming that he can, as hitting water at great speeds gives it the property of concrete, so to speak. But I want to know whether he has done it or not?

I'm not sure if he's ever been depicted as doing so in the current series. [EDIT: Yes he has, thanks to Gallifreyan] However, he was shown doing so in Ep1 of the 1990 series.

Regardless of whether he has been shown as doing so or not, it is extremely likely that he can based on real world physics and examples. The Basicliscus Lizard can run on water

So yes, the Flash could run on water.

Yes, the Flash can run on water, much like the common basilisk.

I can't speak for the comics, but in the TV series it first happened in S1E5:

Yes, on Superman Vol. 1 199 The Flash races around the globe against Superman, as you can see he is able to run over water 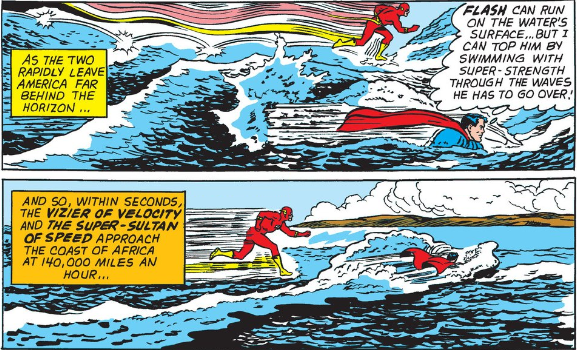 Without reading the other answers I am going to say yes strictly going off the TV show. In the TV show Barry is seen running on water in the first season. All he needed to do was run over 600 MPH.

There are also certain times where we see Barry go into "Flashpoint" where he runs so fast everything around him freezes. Putting that in mind that would also mean the H20 molecules would also stop moving so you could not run a shower or jump in a pool. Why? Because the water cant separate. The covalent bonds could not break. Just as some people have taken photos of the water on swimmers faces before the surface tension is broken, that is when time is still moving at its normal speed. If the Flash is going so fast the everything freezes, while he could just walk on water the same way he would walk on the ground.

27
Can the Flash run faster than light?