Tanks, artillery, armored infantry from earth vs. alien base on the moon (1970s magazine story)

I read a short story published in the 70s. Aliens capture the moon and earth military recaptures it using specially modified tanks, artillery and armored infantry.

story-identification short-stories moon
Share
Improve this question
edited May 26 '17 at 3:00 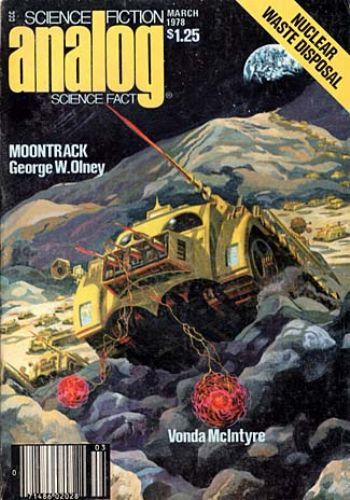 Speaker A: Do you seriously mean to stand there and tell me that you propose the use of a mechanized force on the Moon?

Speaker K: The proposal is not as unreasonable as some of the others that we have heard today. Look at the screen, you will see a film of a mech force taking a target similar to the alien base. You have all seen the feasibility study, you know that such an operation can be supported. Lift capability is no problem, and functional ability of the new family of Lunar vehicles is the same as that of the Mechanized Infantry Combat Vehicle from which they stem. The base itself is wide open to mechanized attack, almost as though they had no conception of the idea.
Gentlemen, the alien base has begun to destroy our orbiting satellites. It is my belief that we are being systematically run out of space. I feel that this is our only solution.

Speaker D: What about the cost of transporting fifty of those eleven-ton behemoths to the Moon? Is it worth it?

Speaker K: What is survival worth? More to the point, we do not have to transport all fifty. Moonbase has thirty HLTV's of which twenty-seven are functional. The nuclear powered Heavy Lunar Transport Vehicle will be our Lunar MICV. With the lesser number of vehicles required for transport, along with the weapons ammunition and gear of a heavy infantry combat team, the payload would come to about a third of that required for the original Moonbase lift. Since we have four times as many shuttles now, the lift becomes expensive but practical.

Speaker L: Gentlemen, the layout of the base tells us something of their combat capabilities. The aliens, whatever the reason for their hostile acts against us, are extremely familiar with two forms of combat. Their capacity for spatial combat is tremendous, and they have developed what we commonly think of as light infantry combat to a high art. In that last field, they are as good as any we have ever faced.

Bob was listening to the intercom chatter when he found the first of the alien bodies. Looking at the bloated thing oozing dark fluid into the vacuum, he realized that he was looking at an overgrown Koala Bear. He shook his head, thinking that the TVT networks would have a field day with the Army once pictures of these big, lovable teddy bears were released. Oh well, he thought, another day, another seventy-five cents.

Not the answer you're looking for? Browse other questions tagged story-identification short-stories moon or ask your own question.

4
Short story about an alien from the Moon
4
Short Story - Family Moving to the Moon
18
Identify a catastrophic sci fi story written before 1980: ruptured spleen, alien moon base, time and space travel, antimatter tool
8
What is the title and/or author of a story about aliens hijacking the Earth and the Moon?
10
Short story where aliens ask for Earth's help and ends with an alien being glad the Earthlings brought their moon with them