Why did the Starks kill this character by trial, and not by simply having Arya do it in secret?

Spoilers from Season 07 Episode 07, "The Dragon and the Wolf".

We saw that Littlefinger is sentenced to death by the Starks (especially by the law of Lady Sansa Stark) for his crimes.

Wouldn't it be more profitable if the three (Sansa, Arya, Bran) considered this character guilty on their own (in private), and order Arya to execute him and at the same time take his face?

If they did it, they could rule the Vale and have other links to influence people.

The official script for the episode has been released and shares some interesting insight into the trial. The main thing being that everyone in the room apparently already knew the trial was for Littlefinger, not Arya.

SANSA: How do you answer these charges, Lord Baelish?

Littlefinger stiffens, as everyone in the room looks at him.

Everyone else is in on it. For once, Littlefinger is the man on the outside.

As if caught in a bad dream, he cannot speak for a moment

By doing it in trial they expose Littlefinger for who he was to everyone, not just those who already knew it. Though to be fair most people already knew and those that didn't were told before the trial as per the official script.

What can they gain from doing it in secret?

What can they lose from doing it in secret? Trust, power, support, etc.

Another good point raised by @Odin1806 is:

As to why Arya didn't take Lord Baelish's face, well we don't know if she did or not. For all we know her and Sansa are having a lot of fun with it. 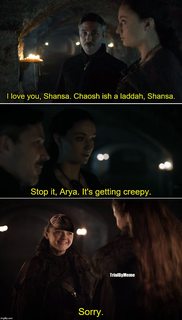 The Starks didn't kill Lord Baelish by trial. They did essentially "just let Arya do it" – they just staged a fancy execution.

A trial, even by Westerosi jurisprudential standards, would require not being tried by either the accusers or the witnesses; bringing serious evidence – which the Starks do not provide (*) –, and a reasonable possibility for the defendant to refute the charges. Now, "reasonable" is up for debate, but one minute from accusation to execution doesn't really count.

Finally, Baelish was not offered trial by combat.

(*) - Bran is a crippled kid who has never been to King's Landing nor the Vale, has strange visions and denies he's actually Brandon Stark. So we can throw that witness away. Arya - ignoring her being a psychotic mass-murderer, she wasn't witness to anything relevant. The letter addressed to Catelyn Stark - can't actually be at hand. Catelyn got it and certainly did not send it to Winterfell for archiving (I think she destroyed it?). Finally, Sansa has already given the opposite testimony to her accusation - i.e. that Baelish did not kill Lysa. Even arguing the opposite makes her an entirely untrustworthy witness.

Not the answer you're looking for? Browse other questions tagged game-of-thrones character-motivation or ask your own question.

9
Could Littlefinger have made this request?

30
Why did Arya just walk away instead of killing this character?
9
Why does Ned Stark only take his sons but not his daughters to watch him execute the deserter?
19
Why did Arya shortened her kill list so much in season 6? Or did she lie?
4
Why wasn't this character at the trial?
7
Why did Lords of Vale swear allegiance to a Northman?
10
What is the place where Will was executed?
2
Why does this character want to kill Anton specifically?
52
Why did Drogon spare this character?
14
Why didn't Grey Worm kill this character?