Why did Hagrid say that Snape was one of the protectors of the Philosopher's Stone?

When Hermione, Ron and Harry tell Hagrid that Severus Snape is trying to steal the Stone, Hagrid replies that he is one of the teachers protecting the Stone.

HARRY: Hagrid, we know he's after the Stone. We just don't know why.
HAGRID: Snape is one of the teachers protecting the Stone. He's not about to steal it.

In the book, Harry Potter and the Philosopher's Stone, this makes sense, but it totally does not make any sense in the movie! Why? Snape's challenge was actually not shown in the movie!

After the chess game, Hermione stays with Ron (because he is hurt). According to the book, Hermione should leave Ron alone and go with Harry to solve Snape's challenge with the potions. Since that was not presented in the movie, it looks like Hagrid lied about Severus being one of the teachers protecting the Stone.

Is there any valid explanation for this?

As a trusted teacher, he was likely involved in protecting the Stone in other ways as well.

Snape seemed to be actively involved in protecting the Stone in ways other than the potions riddle. He went to check on the Stone when he got his leg mauled by Fluffy, which was left in the movie.

“Snape was holding his robes above his knees. One of his legs was bloody and mangled. Filch was handing Snape bandages.

‘Blasted thing,’ Snape was saying. ‘How are you supposed to keep your eyes on all three heads at once?” - Harry Potter and the Philosopher's Stone, Chapter 11 (Quidditch) 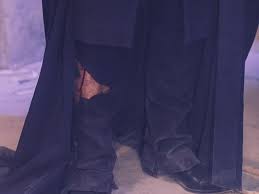 In addition, he could have helped plan the defenses, or given ideas to Dumbledore for how best to protect the Stone.

Even in the book, the potions riddle isn't the only thing he contributes to protect the Stone. He's suspicious of Quirrell, is told by Dumbledore to keep watching Quirrell:

“You see what you expect to see, Severus,’ said Dumbledore, without raising his eyes from a copy of Transfiguration Today. ‘Other teachers report that the boy is modest, likeable and reasonably talented. Personally, I find him an engaging child.’ Dumbledore turned a page, and said, without looking up, ‘Keep an eye on Quirrell, won’t you?” - Harry Potter and the Deathly Hallows, Chapter 33, (The Prince's Tale)

And confronted Quirrell about where his loyalties lie.

‘Oh, I thought we’d keep this private,’ said Snape, his voice icy. ‘Students aren’t supposed to know about the Philosopher’s Stone, after all.’ Harry leant forward. Quirrell was mumbling something. Snape interrupted him. ‘Have you found out how to get past that beast of Hagrid’s yet?’

‘You don’t want me as your enemy, Quirrell,’ said Snape, taking a step towards him.

‘You know perfectly well what I mean.’

“An owl hooted loudly and Harry nearly fell out of the tree. He steadied himself in time to hear Snape say, ‘– your little bit of hocus pocus. I’m waiting.’

‘Very well,’ Snape cut in. ‘We’ll have another little chat soon, when you’ve had time to think things over and decided where your loyalties lie.” - Harry Potter and the Philosopher's Stone, Chapter 13 (Nicolas Flamel)

In addition, he's the one sent to check on the Stone when his leg is mauled by Fluffy.

Explanation #1 (most likely): Snape's challenge is done off-screen. Simply put, Snape's Potions-based riddle was still in place but wasn't shown in the film. Book-readers know what his challenge was, so the whole thing was hand-waved.

Explanation #2: Snape, as a teacher, is a de facto protector. This is a more in-movie answer. Hagrid may have been operating under the assumption that hiding the Stone at Hogwarts makes Snape and the other faculty members co-protectors by default.

Explanation #3: Snape played some other special role in the Stone's protection. Also an in-movie answer. Hagrid has a penchant for saying too much, doing so two other times in the same movie. If Snape had had some other hand in the Stone's protection (say, by having placed it in the Gringott's vault to begin with), this was Hagrid letting it slip.