Movie identification: A lady who could stop time

This movie or possibly TV episode (I saw it on TV) was set during the Cold War. The main character was a lady who could stop time for about 15 minutes or so.

There are a bunch of relatively mundane things that happen while the Cold War tensions keep rising in the background. In the final scene the main character leaves the store after having stopped time and sees a Soviet missile hanging in the air above the street (since time is stopped) about to impact the town (the missile still had all of the stages attached, for some reason)

Other details that I can (sort of) remember: it was set in a small town, I think during late 70s or 80s

This is "A Little Peace and Quiet" from The Twilight Zone.

While doing a little gardening (to the tune of her neighbor’s chainsaw), Penny digs up a necklace with a watch on it. That afternoon after a hectic trip to the grocery store, spilled milk, and an idiot husband, she clasps the watch and screams, “SHUT UP!” To her shock and awe, there is immediate silence as everyone freezes.

That night as Penny is luxuriating in a bubble bath, she hears a new annoying sound — an air raid siren. Her husband calls her in to hear the news that Soviet missiles have just entered US air space. She stops time and for some reason decides to take a stroll downtown in her robe. It is an eerie site as she weaves her way around frozen people and stopped vehicles. She sees several people who are looking at the sky. Looking up, she sees a nuclear missile just a few hundred feet from vaporizing her town. 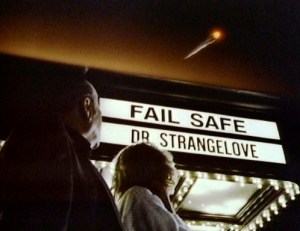 Not the answer you're looking for? Browse other questions tagged story-identification nuclear-weapons cold-war or ask your own question.

24
Nuclear missiles about to land but time stops except for a lone housewife. What show is it?

6
Name of anime space dragon movie
6
old scifi movie about a traveler who comes to earth
19
Short story about people being sacrificed during a flight
7
Cold War-era sci story about nuclear war between US and USSR. American survivors walk to Russia to resettle?
6
What is this early 90s horror novel with an evil hole in the ground?
5
Finding a book series - monster fighting teen who could lift a car with telekinesis?
6
Looking for scifi story anthology, 1970s?
7
Old post apocalyptic cartoon where the main character has red hair and lives with a nomadic group