In the episode I watched the enemy was a woman and man that merged their bodies to create a singular body which was a super powerful version of themselves in order to fight their opponent. The woman was saying something about their power of love and how their power comes from the strength of the love between them. I think they may have used a gem to merge their bodies.

Also I believe this anime might have revolved around these types of merges by the hero's as well who also may have used a gem but I'm not sure. I only remember this specific scene.

This sounds like the end of the anime series Maze.

The series title character is female during the day and male at night. Later we learn that they are two characters who were in love but could not be together, which led to the fused state. They get separated again in the last half, but in the finale fuse again to overcome the villain, who is a similarly fused character. The villain claims she/he will become just like her/him, and Maze counters that she/he won't because of their love. 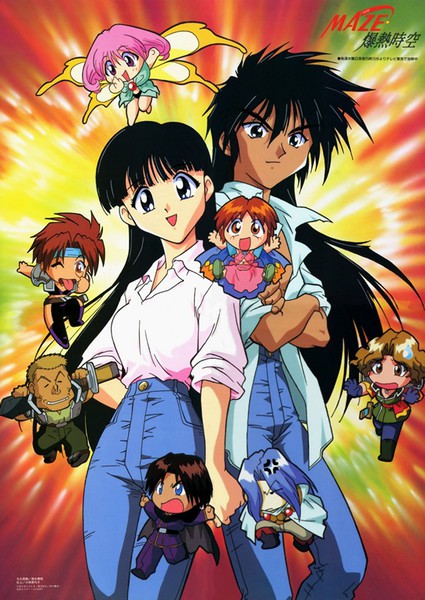 10
Help with title of an old Japanese anime about a quest involving magical creatures?
6
Anime/cartoon about various gems giving powers to their holder
10
Anime with a boy hiring a creature from a stone, meets a man named Dante and starts a journey to collect crystals
5
Anime about high school student that protect their school from monster or maybe ghost
5
Space Anime with super large spaceship, lonely cube AI and young girl crowned as its queen!