Where is the Burrow?

Whereabouts within England is the Weasleys' home situated? Has there been any statement, either within the books or films or in something J K Rowling has said, to indicate the area of the country, or which county the Burrow is?

On the south coast of England.

The Burrow is located on the outskirts of Ottery St Catchpole on the south coast of England. As TheLethalCarrot's answer says, Pottermore locates this within Devon. There is more ambiguity in the descriptions within the seven books, however.

We know that the Burrow is just outside the village of Ottery St Catchpole.

This in turn is located on the south coast of England.

Many small villages and hamlets attracted several magical families, who banded together for mutual support and protection. The villages of Tinworth in Cornwall, Upper Flagley in Yorkshire and Ottery St Catchpole on the south coast of England were notable homes to knots of wizarding families who lived alongside tolerant and sometimes Confunded Muggles.
(Deathly Hallows, Chapter 16, Godric's Hollow).

The Burrow is outside the village and is not directly visible from it.

They had an excellent view of the village of Ottery St Catchpole from the breezy hillside to which they Disapparated next morning. From their high vantage point, the village looked like a collection of toy houses in the great, slanting shafts of sunlight stretching to earth in the breaks between the clouds. They stood for a minute or two looking towards the Burrow, their hands shadowing their eyes, but all they could make out were the high hedges and trees of the orchard, which afforded the crooked little house protection from Muggle eyes.
(Deathly Hallows, Chapter 20, Xenophilius Lovegood).

There's no definitive pinpointing of the Burrow's location beyond "the south coast of England" in the books, however.

It has been credibly suggested that Ottery St Catchpole was based on the real village of Ottery St Mary in south Devonshire. Ottery St Mary is about five miles from the sea, which may qualify it for being on the "south coast of England", depending on how strict your criteria for the southern coastline is. This location of the Burrow tallies with Pottermore's assertion that it is in Devon. Such a conclusion is necessarily speculative, however.

All book canon tells us for sure is that it's on the south coast of England.

The Pottermore page on The Burrow clearly mentions this in the fact file.

Where in the World

Fireplace on the Floo Network, kitchen clock which reports the whereabouts of each family member

Particularly vicious garden gnomes and the ghoul in the attic

Map of England with Devon Highlighted 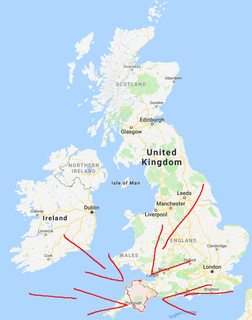 12
Is There Any Connection Between Lily Evans Potter and the Weasley Family?
13
Are There Sexual Aids in the Magical World?
12
In Harry Potter: where do people in paintings go when not within their normal frames?
37
How did Wormtail come to be with the Weasleys?
5
Is Joan of Arc mentioned in the Harry Potter Universe?
3
Why wasn't the Trace activated when Harry was at Grimmauld Place or at the Burrow?
12
Which Harry Potter characters' races were canonically stated?
14
Who is included on the Weasley's clock?