What are these cat like fantastic beasts from The Crimes of Grindelwald trailer?

In the Fantastic Beasts: The Crimes of Grindelwald - Official Comic-Con Trailer we see these creatures:

Does anyone know what these are?

Those creatures are Matagots, spirit familiars that resemble cats.

Those cat-like creatures are Matagots, as Newt says when he sees them in the French Ministry.

At that moment, MELUSINE enters the records room surrounded by growling Matagots.

LETA
(scared) What kind of cats are those?

NEWT
These aren’t cats, they’re Matagots. They’re spirit familiars. They guard the Ministry—but they won’t hurt you unless you—
- Fantastic Beasts: The Crimes of Grindelwald (The Original Screenplay)

Before Fantastic Beasts: The Crimes of Grindelwald was even released their name was already confirmed by the merchandising for the movie and on various websites. The officially licensed merchandise sold depicting the creature has it listed as a Matagot, and it’s recognizably the same creature shown in the picture. 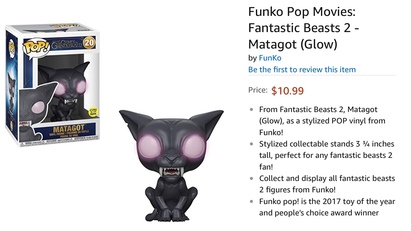 IMDB learned its name during a visit to the set of the movie, where they learned further information about it as well, like that they work in the French version of the Ministry of Magic.

But in the upcoming movie, we enter the world of the Ministry for Magic Affairs of France (Le Ministère des Affaires Magiques de la France).

One of the more impressive sets we visited, it is set beneath the streets of Paris but with a magical glass roof. Around these offices patrol feline Matagots, which resemble a hairless Sphinx cat. They mainly do menial jobs, including staffing the mailroom and providing security for various other departments. But, if provoked, they will transform into something far more menacing.
- 9 Reveals From Our 'Fantastic Beasts: The Crimes of Grindelwald' Set Visit (IMDB)

The Leaky Cauldron, another website, confirmed the creature’s name during their set visit as well.

The feline Matagot is a spirit familiar somewhat resembling a hairless Sphinx cat. In France, they are utilized by the Ministry of Magic to do menial jobs, including staffing the mailroom and providing security for various other departments. Matagots won’t attack unless provoked, but then will transform into something far more menacing.
- Introducing the Magical Beasts of Fantastic Beasts: The Crimes of Grindelwald (The Leaky Cauldron)

With multiple sources confirming it, this creature shown in the trailer is a Matagot.

Just to add some interesting bits - Matagots exist outside the HP world as well.

The Wikipedia refers to them being in traditions of southern France.

A matagot or mandagot is, according to some oral traditions of southern France, a spirit under the form of an animal, mostly undetermined, frequently a black cat, but rat, fox, dog or cow types are said to exist too. Matagots are generally evil, but some may prove helpful, like the "magician cat" said to bring wealth into a home if it is well fed. Traditionally, a wealth-bringing matagot must be lured with a fresh, plump chicken, then carried home by its new owner without the human once looking back. If the cat is given the first mouthful of food and drink at every meal, it will repay its owner with a solid gold coin each morning. In Gascony traditions, you must not keep the matagot all your lifelong: if the owner is dying, he will suffer a long agony, as long as he doesn't free the matagot

The word matagot is derived from the Spanish mata-gothos, from matar (to kill) and gothos (Goths). The Germanic Goth tribes settled in Spain, Southern France and Italy and eventually converted to Christianity, so Goth means "Christian" in opposition with Moro which means "Muslim". Hence a matagot would be an evil spirit who kills Christians.

Another form is magot, and this word designs a bunch of money, a treasure, so the people who became rich were supposed to have a "magot" in their home.

They have also appeared in other novels and works.