What drove Neo to seek out knowledge of "The Matrix" and Morpheus?

Ask Question
Asked 9 years, 11 months ago
Modified 4 years, 7 months ago
Viewed 23k times
26
Want to improve this post? Provide detailed answers to this question, including citations and an explanation of why your answer is correct. Answers without enough detail may be edited or deleted.

At the beginning of The Matrix, Neo is running Internet searches for Morpheus. When he meets Trinity, it is revealed that he wasn't just looking for Morpheus. He was really seeking knowledge of something they both understood to be called "The Matrix".

What I don't understand is how Neo ever became aware of The Matrix in the first place.

Some of this is explained in Neo's first meeting with Morpheus. Morpheus tells us that Neo has had a feeling his entire life - that he knew something was wrong with the world, that he could not explain.

However, this still doesn't answer how Neo came to know that this thing had a name and that it was called "The Matrix". It also doesn't explain how Neo made any connections between The Matrix and Morpheus. Is this covered canonically anywhere?

"Matrix" is on his computer screen earlier. 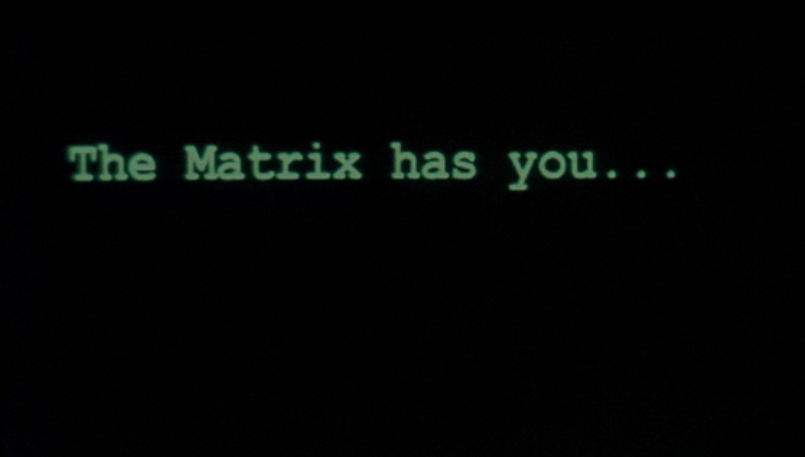 Since Neo is seeking out what is the feeling ('like a splinter in his mind') that's bothering him, he may've realized that this meant to be interpreted as the answer to his question.

Neo has this feeling that bothers him that "something is not right with the world". He tends not to follow rules that he feels as limits put on him. The strangeness of this feeling he can't articulate that he feels that these limits are put on him on purpose, one that is intentionally hidden from him. The limits won't be bothering him if there were reasons for them, but it's likely from his attitude that all he got for his questions were menace, threats and oppression (or been ridiculed).

So he naturally questions anything that he feels connected to this feeling. This includes questioning authority and control like government decisions, thinking of false communication and media influenced social control. But just cannot getting an answer to his question of what is bothering him from the shadows and why it is hidden, he keeps exploring the previous topics what leads him to Morpheus (see below).

It's likely that Neo actually had some of the events from the 1996 script draft as an untold backstory. In that, the "Matrix has you hack" occours inside a chat/irc session where they're discussing the Matrix and some connection to Morpheus. The scene seems to be shortened to keep up with the pace of the movie, but it's still possible that Neo took part in conversations like that before. (Sorry for the long quote.)

We are on-line, inside a chat room called "The Matrix."
It is an exklusive web-site where hackers hang out.

SCREEN
JACKON: I heard Morpheus has been
on this board.
SUPERASTIC: Morpheus doesn't even
exist and the Matrix is nothing
but an advertising gimmick 4 a new
game.
TIMAXE: All I want to know is
Trinity really a girl?
LODIII: 87% of all women on line
are really men.
QUARK: The Matrix is a euphemism
for the government.
SUPERASTIC: No, The Matrix is the
system controlling our lives.
TIMAXE: You mean MTV.
SUPERASTIC: I mean Sega.
FOS4: ALL HAIL SEGA!!!

We drift back from the electric conversation entering --


INT. NEO'S APARTMENT
[...]
NEO, a younger man who knows more about living inside a
computer than living outside one.

He finishes his cereal and is about to disconnect when an
anonynous message slices onto the screen.

SCREEN
Do you want to know what the
Matrix is, Neo?

Neo is frozen when he reads his name.

SCREEN
SUPERASTIC: Who said that?
JACKON: Who's Neo?
GIBSON: This is a private board.

If you want to know, follow the
white rabbit.

NEO
What the hell...

SCREEN
TIMAXE: Someone is hacking the
hackers!
FOS4: It's Morpheus!!!!!
JACKON: Identify yourself.

A chill runs down his spine and when someone KNOCKS on
his door he almost jumps out of his chair.

(A funny thing is that it seems that both Neo and Trinity are not actually logged in but talking via hacking.)

The hackers were already discussing these topics - it was so hot that the chat room itself is called "The Matrix". It seems that the Matrix and Morpheus were connected to some new game but some still believed in them (much like the Publius Enigma). It's likely that it was like an urban legend (about the hidden control, of course), connected to Morpheus. Neo's comments imply that he already knows and is far more serious about these.

Neo could drove from his opposition to authority and then learn about Morpheus whom he feels is talking everywhere about the very thing that bothers him. He was possibly spreading his word on boards/via spams/in chat rooms. Neo, hoping that he may be real and (possibly from Morpheus' themes and style) that he can finally find an answer, does a research on the topic. He learns as much as he can, and must be quite into and serious about this topic since he considers the hacker's conversation Fuckin' idiots don't know shit.

Alternatively, it could be that he knows Morpheus first because he is known as a terrorist (the movie allows him to be even famous while this latter draft excerpt would imply that Neo was hacking his way to the information on him). Neo as a hacker, is likely to consider/explore alternatives to official explanations to terrorist attacks (or simply view most news as cover stories right from the start) and thus get familiarized with Morpheus.

It's also possible that simply it's known that Trinity is connected to Morpheus and Neo knows about "her/him" (The Trinity). It would be natural from Neo to do a search on Morpheus. Morpheus is also called "legendary" in the draft, which would be enough on its own merit.

Either he just started to look for similar thinkers, or heard about the Matrix first then Morpheus, or vice-versa, he started to study the latter two. Morpheus is trying to free minds, while also looking for The One, so it's likely that he tried to hint as much information about the Matrix as it's humanly possible.

Psychologically thinking, The Matrix is what many oppressed or those that feel oppressed would consider freedom. The idea that there is a prison for the minds of the people on earth is similar to government control, ie. The idea of freedom but not truly free. Then you have the all know "splinter in the mind" notion that there is something off about the world, that it's an illusion. In the Matrix movie universe, hackers, not too unlike our real world, are people that do not follow the rules. These "oppressed" people prefer to live outside the system not knowing that in reality they are neck deep in the system. You add in those individuals that are truly free, Trinity, Morpheous, and eventually Neo, who find out that people are prisoners/slaves/less than human in the real world. Wouldn't you want to free your people that you do not believe deserve that fate? Thus, we reach the work that Neo does before he learns of the Matrix. Morpheous was told by the Oracle that he will find the one that will bring peace, so he searches for that one in the Matrix by any means, spy games, hacking, fighting, and yes maybe some terrorism. Sadly to get away from the agents some people were hurt or killed, but who controls the media really. Thus the oppressed are searching for answers and Morpheous is searching for the one. It was only a matter of time before they would find each other. The fact that the prison is just a means to have a limitless supply of energy for the robots tells the audience that while the people are in the prison, it is the robots that are in need of live people, but if any revolutionary movie can tell you is that those deemed the heroes will ride up and overtake their enemies. The robots overpowered people, now it's the people's turn. Back to the topic that the system controls people. On top of a mental prison, the media, government, the agents are all keeping people in their prison by any means. I mean a free human blows up a building to free a hundred minds, why not have the media spin a message of terrorism instead of the truth. Now, back to the illusion of a free world. Just as Agent Smith said "we are not here because we are free. We are here because we are not free." The many levels of control goes beyond just the mental prison and government control in that prison. The people that are still plugged in are not aware because they like their prison and do not want to learn the truth, or not ready. In any case, the notion of freedom makes people ask questions on why there are laws for things that do not, or should not need laws, but they are there nun-the-less. Morpheous, Trinity, and eventually Neo know this, and only desire to free minds from the Matrix and will do so by any means. So, to answer the original question. Neo was searching for an answer to what was wrong with the world, Morpheous was searching for the one, it is reasonable to think that they would eventually find each other, and I that process Neo would of heard about "The Matrix" and there you go.

53
How did Neo know it was Morpheus on the phone and what The Matrix is?

54
How did Morpheus come to identify Neo as potentially being The One before he met him?
6
If Morpheus and Neo were driven by free will, why did they follow the Oracle's advice?
68
What does the blue pill in The Matrix actually do?
7
Why is Neo the only one who does not use leather clothes in The Matrix movies?
4
Are future-Freed People immune to becoming Agents?
53
How did Neo know it was Morpheus on the phone and what The Matrix is?
5
How does Neo see unplugged humans in the Matrix?
9
Why is the Trainman afraid of Seraph, Morpheus and Trinity, when he can easily deal with Neo?