I'm looking for a children's book I had as a kid in the late '80s or early '90s (and am fairly certain it was new at that time). I live in Canada, but I can't say if it's a Canadian book or not; though it was in English, and am fairly sure it wasn't a translation. I'd say it was about 25-30 pages long, and had full-page cartoony pictures with small amounts of text. I can't remember if the text was poetry or prose; it may have varied from page to page.

Each page spotlighted on one or several related "curious machines" which varied from toys, to industrial machinery, to robotic beings. Each machine was quirky and ridiculous in some way, and were spoken of as if they were sentient to some degree. Examples I can remember include:

This is The Book of Foolish Machinery by Donna Lugg Pape.

The E-Eater Machine likes to gobble up E's.
It eats all the E's out of words that it sees.
If the E-Eater loses its glasses it takes
The I's out of words, but soon knows its mistakes.
When the E-Eater gets an I up to its face,
It's an I-Dropper, tossing I's any old place.
It's not easy to read with E-Eaters about,
For words look so strang with the E's at n out.
If you s this machin and you'r planning to r ad,
H r 's som advic you c rtainly n d.
Th E-Eater can't fit insid a small spac ,
So g t up and look for a good hiding plac . 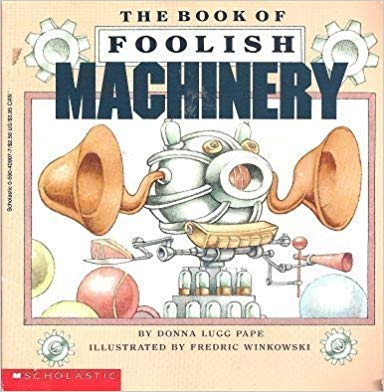 Not the answer you're looking for? Browse other questions tagged story-identification robots childrens-novel or ask your own question.

4
Identify movie/show with military robot cutting through soldiers' legs
5
Kids illustrated book about being stranded on an alien planet with multiple choice questions
14
Identify a book I have read about a war between humans and machines
16
Identify science fiction novel about ancient machines destroying all sentient planets
8
Book Identification- Children's puzzle book about a rescue from alien abduction
11
Children's fantasy series very similar to Narnia
10
Story with a pre-determined sentient book
6
A girl raised by a robot, utopian children's book
9
Book with children from three different worlds