E-book set in fantasy world with trolls and pirates

Looking for the title of an e-book I read a couple of years back.

I can't recall the main storyline just that there was some war going on the the heroines village. Her love interest was some kind of half troll or something being used as a weapon by the other side.

About half way through the book they meet this pirate and this blind girl (I think she was a seer?). The main characters assume she's being held captive as he calls her Ransom but it turns out they're partners. The pirate had found her a couple of years before and planned to hold her for ransom but she had no memories so he started calling her that. He also had a pet bird he called Dinner because that's what he intended to do with it but ended up keeping it as a pet.

It's like a crackpot comedy thing with a bit of romance.

I think the author was self-published, not sure.

This might be Travels With a Fairytale Monster by Elizabeth Gannon. 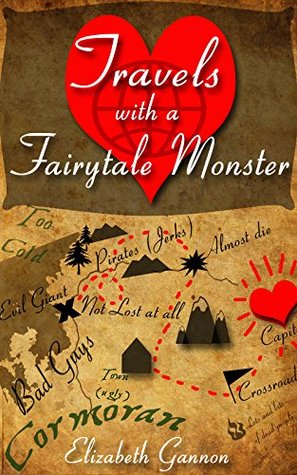 Alone in the world, with only her brother to care for, Taylor is struggling to survive. For years, a war has torn apart her kingdom, turning the one-time tailor into a solider in the local militia. Now her village is under attack. Taylor’s fought long and hard for freedom, but now it seems that she’s on the losing side of the battle. As her town burns, her enemies unleash one final weapon. Something so terrible that it’s been the stuff of legends. An Ogre. A massive monster who can grow as tall as a giant and ignite his whole body in ravaging flames. Nothing can stop such a beast. …Unless Taylor figures out a way to free him from his captivity and convince him to join her team, instead.

Last of the race of ogres, Dom has spent years enslaved by the humans. He doesn’t understand them. He doesn’t like them. And he sure doesn’t care about their pointless wars. When he first sees Taylor, though, he begins to seriously reconsider his hatred for her people. Taylor is nothing like the other humans. She’s brave and beautiful and full of ideas. Sure she’s a little bit small, but he’s still dazzled with his good fortune. Ogres recognize their mate when the first see them and everything in Dom knows this crazy redhead is supposed to be his. He just needs to convince her that an ogre can be Mr. Right.

When Taylor tells Dom she has a plan to end this ridiculous war, he eagerly agrees to help her and her screw-up of a brother reach the king. It seems like a good chance to win Taylor’s affections and he’s not very concerned about the dangers they’ll face. After all, he can just kill any humans who get in his way. What could possibly be simpler? Except before long, they’re dealing with a band of unscrupulous pirates, angry villagers with torches, assassins on their tail, and getting lost in a forbidden forest. Taylor wants to help Dom escape his captivity and regain his stolen homeland. Dom wants to show Taylor they were made for each other. But, surviving to see their happily ever after just might be harder than either of them think.

You have a monstrous creature who's being used as a weapon and who is a love interest. One of the reviews notes that there is a female character named "Ransom" associated with a pirate named Uriah, several of the reviews note it to be a farcical book, and some reviews mention the heroine going into "trances" and having unreliable powers, which fits with your memory of her being a seer.

The author apparently wrote a sequel following Uriah and Ransom, Nobody Likes Fairytale Pirates, which mentions her blindness.

Ransom- A losing battle with pirates has left Ransom blind, scarred, and with no memory of her old life. Uriah is the only one she trusts. For five years, she’s been on his “crew,” which mainly means she does all the planning and worrying for her irresponsible captain. When the two of them windup in an unfriendly land, with no ship and no money, they realize they’re going to need someone to swindle. Quick. Luckily, they’ve got a line on a moron with a treasure map.

I found it by a Google search for site:www.goodreads.com trolls pirate blind girl ransom

3
Shifter book series with the alpha's daughter as the main character through out the series
5
Manga with a god that sells dreams and a variety of god/animal characters
9
Looking for title of a fantasy fiction with huge war, invader on airship with warlock, island fortress with sorcerer, mnemonic storyteller and dragon
10
Sci-Fi/Fantasy Anime about a girl who turns into a world-destroyer
5
Anime with fighting and magic weapons?
5
1980s Book, probably fantasy, set between reality and a fantasy world like 1600s Spain