Why does the Normandy SR-2's CIC have so many crew stations?

The Combat Information Center of the Normandy SR-2 (Cerberus configuration; I haven't played ME3) appears, despite having oceans of empty space, to also have more crew stations than it could reasonably use. Here's a diagram: 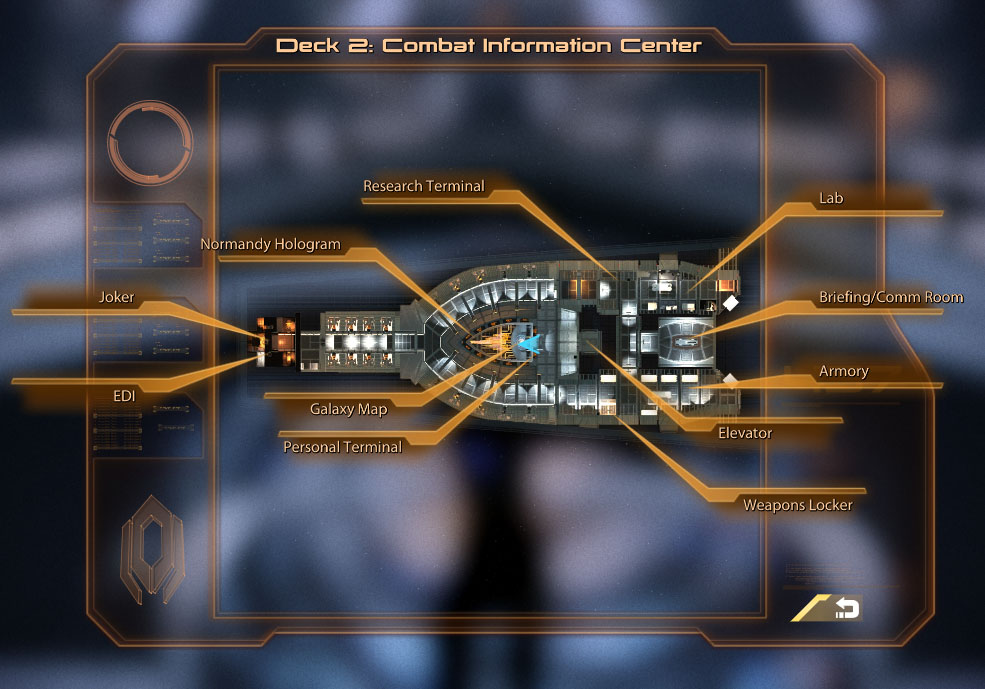 Squinting in more detail, there are

EDI can, depending on dialogue choices, observe during discussion prior to the opening of Grunt's tank that the ship has "twenty-four permanent crew" (video @ 12m 35s). There are thirteen possible squadmates (wiki). Depending on ambiguities about which squadmates qualify as crew members (namely Shepard, Miranda, and Jacob), the permanent crew plus all squadmates is between thirty-four and thirty-seven people. The CIC can only be fully staffed by reducing the rest of the ship to a skeleton crew at best, or completely empty at worst.

This doesn't seem a particularly logical design choice. What factors would lead Cerberus ship designers to considerably oversize the CIC compared to the crew complement?

Having "twenty-four permanent crew" doesn't imply that that's all there is on the ship at that time, nor does it suggest that the Normandy SR-2 isn't capable of housing and utilizing many more depending on the mission requirements.

The original SSV Normandy for example lists 51 crew members (not including optional companions), and the Normandy SR-2 is cited as having almost twice the mass of the original. While I've not found a list of total crew for the SR-2, it stands to reason that with that much more space, you'd expect there to be more people running around to keep things operating smoothly.

Even outside of the operations we see in the game, it's also quite possible they wanted the ship to be capable of utilizing a much larger crew if the situation calls for it. Having additional stations in the CIC gives the ship far greater flexibility in it's operational capabilities than one scaled down to only handle the standard complement we see in ME2. Such a situation arises in ME3, where the Normandy is used to coordinate a much larger fleet (spoilers), which was likely only feasible because of the additional "expansion" stations.

You might use an analogy with a real warship. The CIC of a modern warship might have 30 or more stations, and at action stations, every seat would be filled with likely a few more hanging around, depending on the ship and the navy. During a normal cruising watch, there might only be a handful manning the essential systems for being underway; radar, comms, sonar, and so on.

When you see the interior of Normandy (SR1 or SR2) and have the ability walk around, it typically isn't in a red alert/action stations situation. It's cruising or conducting routine flight operations or quietly docked somewhere. So it makes sense that most of the stations are unoccupied. The times you do see the interior of the ship when it's in combat, (the Battle of the Citadel in ME1, the attack on the Collector Base in ME2, and in ME3 the assault on Earth), you don't get a full view of the interior, so you could be safe to assume those empty positions were filled.

As for why SR2 seemed to have more stations than crew, Cerberus might have intended more crew but were limited because they specifically chose Cerberus personnel that Shepard could get along with or sympathize with (which was explicitly stated in one of the games), which may have limited the available pool of personnel.

Also the codex does mention somewhere, I believe in ME 1, that sleeping pods are shared between crew members. So given 3 rotations, you don't need that many sleeping pods/bunks as at least 2/3 of the crew will be up and active at any time. Given that the Normandy was designed as a warship rotation schedules will likely be fairly detailed and specific enough to ensure the efficiency in sleeping pod usage.

As for why the SR2 has a smaller crew compliment than the SR1 despite it's bigger size, you must take in to account where the quote about permanent came from. I don't recall that statement myself, but if occurs, based on dialog choices, before awakening Grunt, then one thing is fairly obvious. The statement was said of the SR2 during it's time with Cerberus one a volunteer suicide mission. Cerberus was until two pretty stringent constraints when they were staffing the ship. Firstly, the crew members had to be willing to risk their lives in a likely suicide mission and secondly they needed to present a friendly/relatable/kind face for Cerberus. So they couldn't be crazy die hard mercenary types like Zaeed or true believes who would do anything Cerberus asked. (Despite Zaeed being part of the ground team, he was explicitly a hired merc and therefore not a representative of Cerberus and the values they wanted to try to sell to Shepard.)

So staffing was likely slim picking which is why they had to grab so many recently ex-alliance people like Joker, Chakwas, Ken, and Gabby. As well as people who were likely not Cerberus before signing up like those crew members in the crew quarters that have family in terminus colonies.

What we can infer is that 24 is more than the bare minimum needed to run the ship with a Skeleton crew. (the Normandy was, I believe, crewed with a skeleton crew from leaving Earth, until arriving at the Citadel.) But if you remember the first scene for ME1 we see Kaidan sitting next to Joker, and in the intro to ME2 we see Presley and an unnamed female crew person sitting up in the bridge. We know that Kaidan's usual station is on the crew deck near the sleeper pods and the lockers. We also know that Pressley's normal station is on the port side of the stations near the galaxy map. So either they performs multiple roles as part of their duties (very likely) and/or most stations can login into the work interface of any duty station (also very likely). Some stations may also act as secondary stations for duty stations from other parts of the ships such as the Gunnery station and engineering. Someone from those sections might have someone on the bridge during critical moments like battle to allow the Captain/Commander act in the most efficient way possible.

24
Why do the aliens in Mass Effect have breasts?
3
Why didn't the Alliance wipe the Normandy computers?
12
Why does the effective military strength affect the ending of Mass Effect 3?
2
Was there any backstory or purpose for the Cryogenics Pods on the Normandy?
5
Why is the Citadel relay needed?
4
Does Mass Effect provide a lore reason why you can't use enemy weapons?
6
Why didn't the Council attack the geth immediately?
37
Why didn't the Normandy crew experience time dilation?
4
Why did the Reapers bring the Catalyst to Earth?
2
Why does Legion have to be used instead of any Geth?