Graphic novel: Soldier woven in barbed wire with something like angels' wings

I have read this graphic novel between 2000 and 2005 in the library. It was an around Din A4 sized hardcover book, but thin. Maybe original France, but I read it in German language. The title could be something with uppercase letter "X".

The title or one of the first pictures showed a soldier in World War (WW2 I assume, but maybe WW1). I assume he was dead, hanging in barbed wire. There was the impression of angels wings in this picture. I do not remember, if the barbed wire fored this shape, or if it was a shadow-like second picture "behind" the first picture.

The story was something dark, with god and angels. So I hope I meet the Scifi.SE criteria. It was a bigger timeframe than only World War. The different times were woven with each other. It leaves the impression of a reasoning that there must be angels, so the described picture could be some kind of "proof" in the whole story. I could remember no "action", the whole feeling was "sadness".

I remember how impressed I was from the pictures. They were like pencil drawings. Not so clean like this ones which are made with a computer's help. I cannot remember some colors, so I assume it was almost in black and white, maybe some sepia or brown on the title.

I wish to see these pictures​ again, to explore my long-lasting impression of it.

I can't find the specific image you're looking for, but I have a pretty good feeling you're remembering the French series XXe ciel.com (1997-2001) by Yslaire.

Brussels, Marche 1st, 1998. Eva Stern lets herself be carried away by a strange dream. She dreams of an angel with a wounded forehead, looking down from the clouds over a World War I battlefield. Soldiers are agonizing at his feet. Among them is Eva's brother Frank, with a camera in his hand, who finds the strength to capture his last photography.

The next day, Eva is puzzled by an e-mail sent by a mysterious "@nonymous". A succession of photos retracing the twentieth century. All of them depict beings with arms outstretched, like angels. Eva, a psychoanalyst born with the century and preparing to die with it, seeks to understand. Her quest begins, which will revive the memory of Frank, the missing brother whose last photo bore the strange words "ich bin ewig" - I am eternal...

From what I gather around, I think this does fit in the science-fiction/fantasy category, in a weird "dreamlike" kind of way. The images I can fetch from Google images match your recollection of pencil-drawn gloom with little to no colors, and I can imagine them leaving an impression: 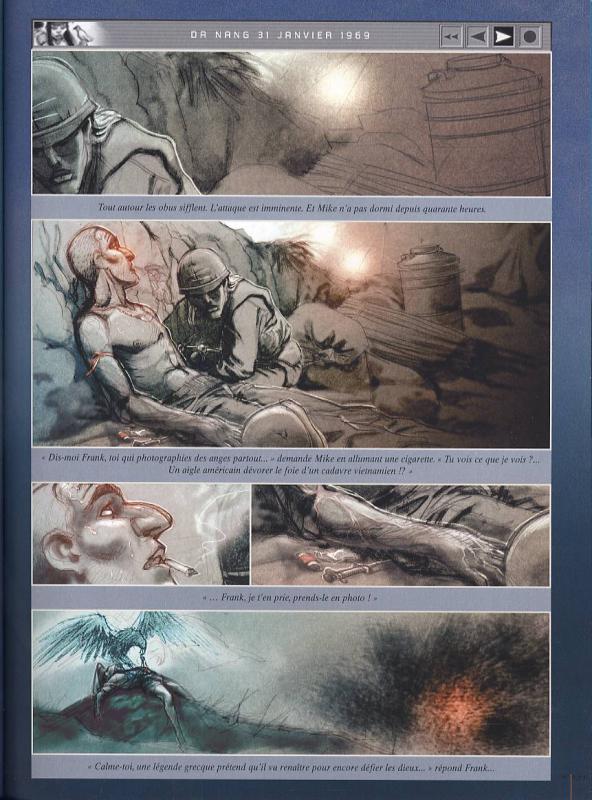 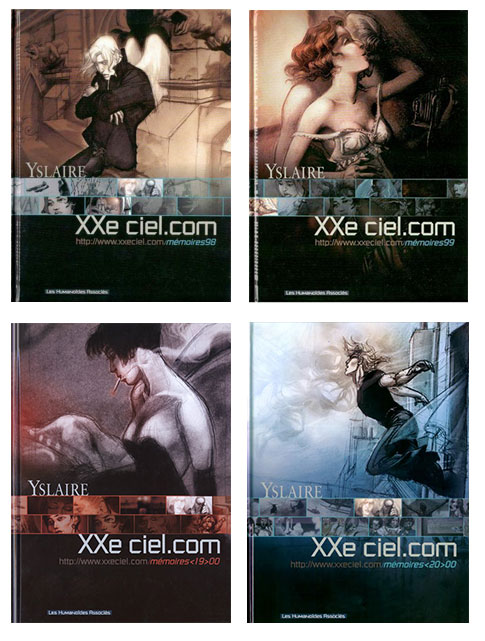 8
Early '80s sci-fi/fantasy graphic novel made with real photographs?
5
Name of comic/graphic novel with circus people
6
Graphic novel ID: Boy contacts spaceship with rock concert
7
Story about realm that contained Avalon and Tara and more
9
Webcomic about a robot girl able to use magic who moves to the city to go to school
6
Book with angels as crows and anger as plant
23
Book which has different races and could use magic
10
Sci-fi book about a family of space explorers who wake up from suspended animation, and land on a planet populated by lifeforms they call Churrs