What did The Other mean when it told Thanos "[the Tesseract] is located on a human world" - "a" human world, not "the" human world?

In a previous question, I asked about why many extra-terrestrials in the MCU seemed familiar with humans, even though Earth hadn't yet had a space faring civilization, and wondered about the origin of some of the human appearing characters (e.g. Stakar, Aleta Ogord, and other Ravagers...). The response (which made sense) was:

Since the time, I posted that question, I re-watched The Avengers, and I noticed one very small detail:

At the very beginning of the movie, when The Other is explaining to Thanos that they have located the Tesseract and how they plan to retrieve it, it is located on "a human world." Not "the human world," "a human world" – implying that there are other human worlds besides Earth.

This seems to contradict the earlier response, and I am wondering if there is anything in the Marvel canon (since there are no additional details in the MCU itself) that can clarify whether in fact there were other humans in the galaxy besides the humans of Earth?

To specify the questions:

In the comics, Earth-616, there are many different origins given to humankind. However, they all seem to have the same thing in common: humans are specific to Earth but there are other humanoid races. For example, the Xorrians claimed to have created humans, Skrull, Kree, etc. 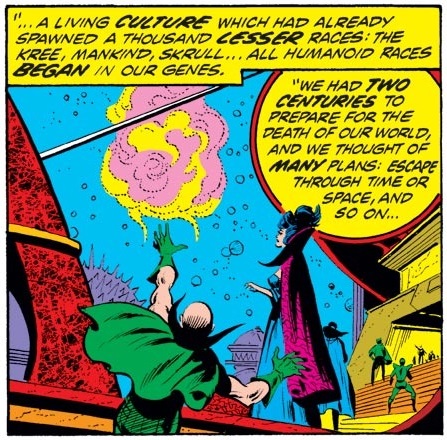 The same thing seems to hold true in the MCU, we only ever see Humans of Earth, every other "human" is actually just humanoid, for example, the Xandarians. So when The Other states "a human world" it is likely a translation error in what we are seeing on screen, a mistake made by The Other or an out of universe mistake by the writers. He either meant "the" or "humanoid" instead from the evidence we have at the moment.

It's worth pointing out that The Other doesn't seem to be the best with grammar or even really care for it. A simple mistake, which is probably quite a common one (I would probably say a), isn't exactly out of the realms of possibility here.

14
Where do the spacefaring humans of the MCU come from?