This is a book I read (listened to?) around 2007. I don't remember a cover; it may have been an audiobook, but I can't find it in my Audible library.

A ship is traveling away from Earth at relativistic speeds. Navigation / maintenance of speed requires constant intervention by a few people on board who have some sort of special mental / extrasensory capability; they work in shifts. Some people on board (the navigators themselves ? not sure) maintain a mental link with their identical twins who have remained back on Earth.

Earth is destroyed when the Sun explodes. The twins on board see the event and feel their siblings dying, and one of them commits suicide, which makes navigation too exhausting for the remaining crew and leads to the ship slowing down and being unable to complete its journey in a reasonable time: the crew will die in space.

Another ship from Earth, apparently FTL and developed after their departure, catches up with them. It turns out that the Sun's destruction was not a natural event, but was caused by some unknown entity. Having no home to come back to, they decide to identify and hunt down whoever destroyed the Sun. (End of this book, don't know about a sequel.)

The writing was modern and not youth-oriented. The story was pretty strict about time dilation, though I don't remember if the telepathy between twins was instantaneous or limited to light speed. The entire story was told from the point of view of the ship's crew. The crew was mixed-gender, with at least one couple.

Spider Robinson's Variable Star, based off of an outline by Robert Heinlein. The following is the blurb from the back of a copy of the book:

When Joel Johnston first met Jinny Hamilton, it seemed like a dream come true. And when she finally agreed to marry him, he felt like the luckiest man in the universe.

There was just one small problem. He was broke. His only goal in life was to become a composer, and he knew it would take years before he was earning enough to support a family.

But Jinny wasn't willing to wait. And when Joel asked her what they were going to do for money, she gave him a most unexpected answer. She told him that her name wasn't really Jinny Hamilton---it was Jinny Conrad, and she was the granddaughter of Richard Conrad, the wealthiest man in the solar system.

And now that she was sure that Joel loved her for herself, not for her wealth, she revealed her family's plans for him---he would be groomed for a place in the vast Conrad empire and sire a dynasty to carry on the family business.

Most men would have jumped at the opportunity. But Joel Johnston wasn't most men. To Jinny's surprise, and even his own, he turned down her generous offer and then set off on the mother of all benders. And woke up on a colony ship heading out into space, torn between regret over his rash decision and his determination to forget Jinny and make a life for himself among the stars.

He was on his way to succeeding when his plans--and the plans of billions of others--were shattered by a cosmic cataclysm so devastating it would take all of humanity's strength and ingenuity just to survive.

Could this be Time for the Stars by Robert Heinlein?

Travel to other planets is a reality, and with overpopulation stretching the resources of Earth, the necessity to find habitable worlds is growing ever more urgent. With no time to wait years for communication between slower-than-light spaceships and home, the Long Range Foundation explores an unlikely solution--human telepathy.

Identical twins Tom and Pat are enlisted to be the human radios that will keep the ships in contact with Earth. The only problem is that one of them has to stay behind, and that one will grow old while the other explores the depths of space.Always a master of insight into the human consequences of future technologies, this is one of Heinlein's triumphs. 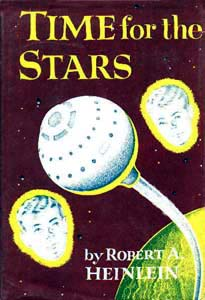 11
Short story from the 70's about a super-fast ship approaching Earth
14
Book series: Minerals crashing into the sun, emigrating cult, and frozen man
6
Looking for surreal sci-fi book
14
Scifi book with battle spaceships and humanoid cat people who have eyes that change colors with their mood?
2
Sci Fi book about ESP. Each person with ESP has just one power
23
Book about a colony ship failing and the colonists returning to an empty Earth