Can you identify this game from 1991 or before?

Can you identify this game? This is a scanned picture from Top Secret games magazine from 1991. It was used as an illustration for the game "Purple Saturn Day," but nothing in this game looks like this.

Here you can see what "Purple Saturn Day" looks like.

I used Google image search and TinEye, but no luck. 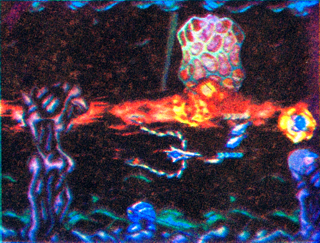 This is "X Multiply," a side-scrolling shoot-em-up released by Irem (perhaps best known from another stylistically similar shooter series, "R-Type") in 1989. The characteristic "tentacles" extending from the ship are quite distinctive. I saw the tentacles and knew that I had played this game; however, I have played a lot of old video games, and it took me a little while to track down the name of the game and additional details about it. 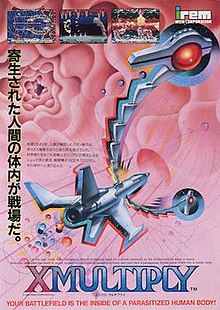 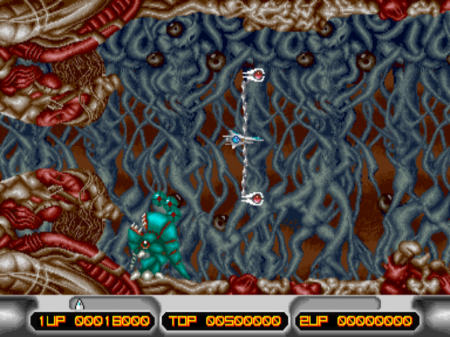 You can see a complete playthrough of the Playstation re-release on YouTube. The magazine image is from level 6.

6
"Demon Flute" Story in Analog
7
Arcade Game with network-like enemy
11
Space-themed MS-DOS game with top-down perspective, crumbling bridge, and ghost-like aliens
45
90's PC game, similar to "Another World" but in 3D, dark, purple, locked inside a prison
12
Looking for a novel or short story about an immortal shapeshifter cop/detective
3
Crude 3d game that starts with you viewing souls, represented as stars in space, ends with man in a cage
6
DOS Go/Othello/Reversi clone with creatures/monsters like Snowmen instead of stones