“Ah, music," he said, wiping his eyes. "A magic beyond all we do here!” - Albus Dumbledore, Harry Potter and The Philospher's Stone

So, Dumbledore is pretty darned fond of music.

We also know that, under Dumbledore, Hogwarts has been barely regulated (it's mentioned later on that Dumbledore basically has free reign to teach what he likes and hire what teachers he likes).

There's also a fair amount of extracurricular activities (quidditch, gobstones, chess etc.). These kids get up to some things.

We know that there are some popular and successful musicians in the magical world (Celestina Warbeck and The Weird Sisters are among them). Back out in the real world young people are very likely to use their teenage years trying to emulate popular musicians.

There also seems to be (on the whole) very little poverty among Hogwarts students. The Weasleys are always a little short, but just about everyone else can afford a heap of books each year, uniform, wand, broom and a pet with no trouble. So it wouldn't be too ridiculous to get an instrument tutor in for kids who wanted to play.

And yet, Hogwarts has:

So why not? The headmaster loves it, the kids love some musical acts (even though they don't seem to listen to them), but no kids care?

Music and Muggle Music are both taught at Hogwarts as an extra-curricular activity, as seen in Gameboy Colour Game 'Harry Potter and the Chamber of Secrets'.

According to the blurb, Muggle Music classes are only available to third years and above. You can see the classroom below and here. It features drums, a piano and choral stands. 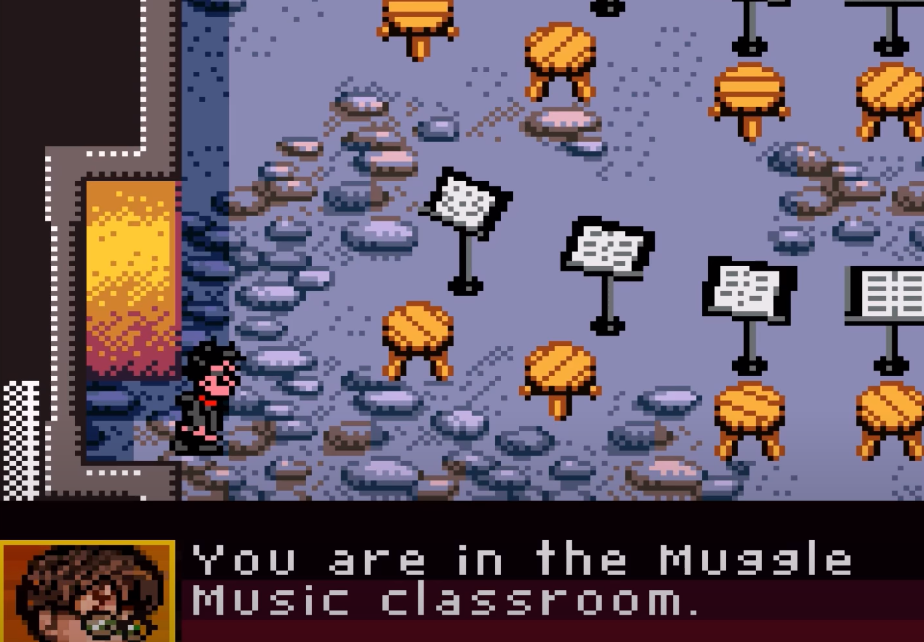 76
Does Hogwarts teach non magical classes?
12
What are the requirements to teach at Hogwarts?
6
Are there movies and/or theatres in the wizarding world?
11
Why did Dumbledore appoint Hagrid as professor of Care of Magical Creatures?
124
Why doesn't Hogwarts have more teachers?
14
Why didn't they teach some basic healing in Hogwarts?
33
Why doesn't the Hogwarts staff stop Myrtle from spying on students taking their baths?
12
Why doesn't Hogwarts carry spare wands for the students that need them?