How could the Picard Maneuver confuse sensors from the Warp Era?

As I have recalled, the text is correct. This was told by Picard in an episode of Star Trek: The Next Generation TV series. And, in the end of that episode, when Picard tried to apply the Picard Maneuver to attack the USS Enterprise D, it was shown on the Enterprise D screen that the Stargazer was at two places for an instant before it was stopped by the tractor beam. Images from Memory Alpha:

How could the Picard Maneuver work to confuse sensors from the Warp Era? Isn't it like we rely on light waves to see the warping ship?

When data from the newly-moved ship reached the sensors, data from its previous position was still arriving.

It seems as if data transmission wasn't FTL. If it was, the sensors would never have been able to lock a warping ship's exact location. But we have seen battles at warp speed and sensors detect something from light years away. What's special with the Picard Maneuver which screws sensor readings (even those of a Galaxy-class starship)?

The fact that the warp takes place so quickly. The subspace sensors that are used for keeping track of far away and FTL ships are not good at short range focusing or slow moving vessels (In this case, slow moving still refers to things moving impossibly fast compared to orbital speeds). So, short range, simple light and whatever sensing mechanism that is used in the tricorder is used. The other key to Federation sensor tech is their amazing computers, which work faster than quantum computing and are integral to both their short range and long range sensors.

The Picard maneuver works by confusing the computer in much the same way that a magician confuses your eye. The very short warp burst triggers the long range sensors to track the very fast moving object, while the ship itself out runs the light from the original position, confusing the short range sensors. All that input also has the probable impact of the computer having to run a self diagnostic since the results of the scans are outside normal parameters, bogging down even the impressive capabilities of a Galaxy class starship. All of that combines to create a split second of confusion, allowing the tactical advantage to fall to the attacker.

It seems as if data transmission wasn't FTL.

Initially, let's assume it wasn't FTL. In this case, it's easy to see the theory of the maneuver. During its warp jump, the after-image of the Stargazer in its original position appeared absolutely real. Coming out of warp, the Stargazer appeared to be a second, different ship. The Ferengi computers had been set to target the first ship, which still appeared to be there, so the computers had no reason to change that setting; when the Ferengi fired, their shots went for the wrong ship. It would also have caused confusion and alarm on the Ferengi bridge to see a second ship arrive. For both these reasons, it was just enough time for the Stargazer to attack before being attacked.

(I believe there would have also been a third Stargazer image, moving away backwards, which was the after-image of the ship in motion as it arrived. It seems like this could be used to detect the maneuver even using light-speed sensors; if you use the backwards-moving image to understand the trajectory of the ship that just arrived, and it coincides with the position of the first ship, then you have good evidence that the two ships are the same. However, the Stargazer could have prevented the after-image being immediately useful by taking a curved path towards the Ferengi.)

The screenshots in the question are from 1x09: The Battle, where the Stargazer attempts the maneuver against the Enterprise. They are not an accurate depiction of the maneuver. For one thing, the distance between the ships is much too low. Light is really fast -- you'd need 23.5 Earth widths between the ships to get even 1 second of light-speed delay! We can dismiss the depicted distance as artistic license because if the ship had started at a proper distance it would be too tiny to see on screen. However, another flaw is that the ship on screen can be seen starting to move, seen moving forwards, and then seen stopping, which does not really make sense. For an in-universe explanation of the on-screen images, we can imagine that since Picard was under mind-control, disoriented, and operating the ship without a crew, he bungled the maneuver.

Anyway, the point in that scene is that Riker and Data were worried by the prospect of the maneuver being used against the Enterprise and Data states there is no defense against it.

However, the Enterprise clearly has FTL sensors, at least long-range ones. Long-range sensors do not seem to be an obscure technology, so the Ferengi should have had them too, so how could the maneuver have ever worked? Note that there are a variety of different sensor technologies in the Star Trek universe, many light-speed and some FTL. We can hypothesize that the FTL sensing techniques are simply too imprecise to be useful for targeting ships in close-range tactical battles and thus are relegated to long-range use. Often we see that battle damage causes a ship's short-range or long-range sensors to go offline independently from one another, suggesting that the two technologies do not substantially overlap in their design.

There is a simpler explanation given in the Star Trek Fact Files, which was a Paramount-licensed magazine series of encyclopedic information. In an issue from 1997 it has an interesting analysis of the Picard Maneuver. It implies that the Ferengi ship simply did not have FTL sensors at all, which it describes as a "serious deficiency". It also states:

It doesn't explain why Riker and Data were worried about it being used against the Enterprise.

I've reproduced the two pages of the article below. (Regarding copyright, I believe that posting two relevant pages for discussion out of seven thousand pages in that whole series, particularly when it is out of print, is minor enough to qualify as fair-use, although I'll remove them if asked.) 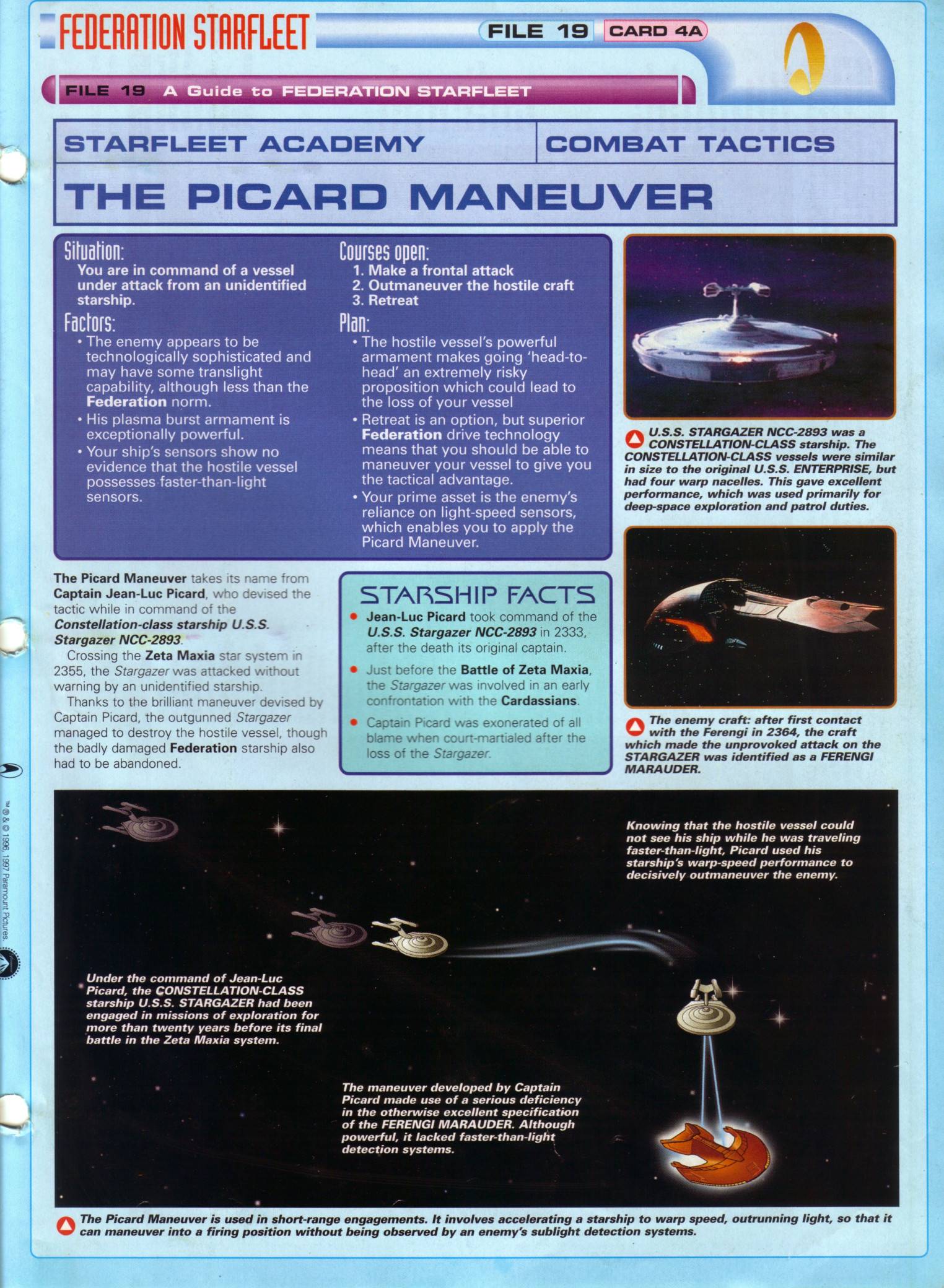 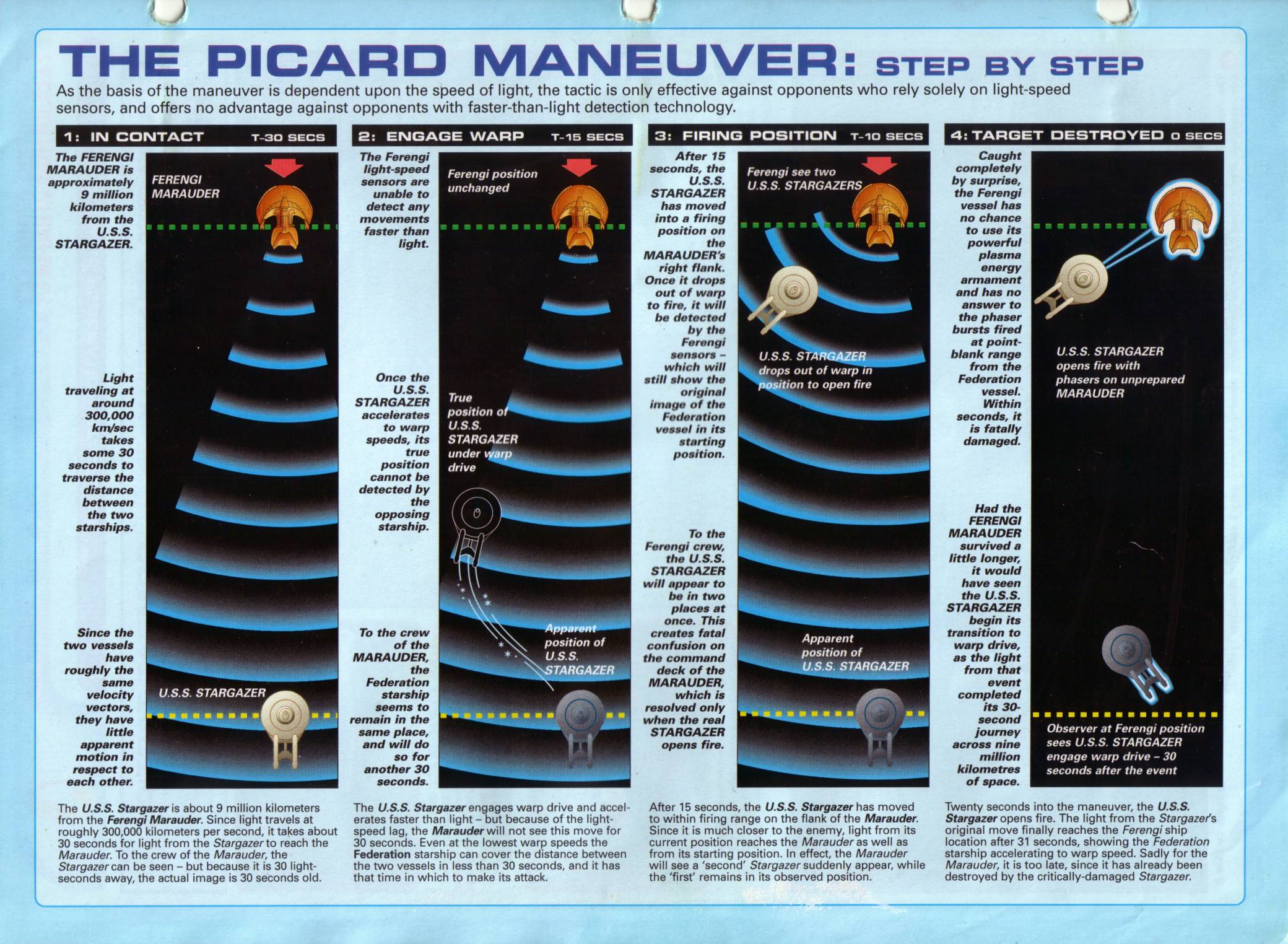 The obvious answer, that avoids all the nonsense of faster than light sensors vs sub light speed sensors, is Damon Bok's son being an inexperienced Damon, interested more in profit and lacking the tactical awareness to react quickly enough to Picard's tactic.

Also given the timeframe of the Picard Maneuver from start to finish would have been mere fractions of a second, but no more than 2 light seconds distant and likely less than 0.5 light seconds away, as light travels at 300,000 km per sec. Further as Tom Paris Voyager states, when faster than light, no left or right.

In relation to the Picard Maneuver, several factors must be addressed. These go above and beyond the 'FTL sensors' issue that has been argued over several times. Firstly, one must realize that Warp is not a SPEED, but a VELOCITY. It is a multiplicative factor used to determine how quickly a specific distance was covered through subspace, not normal space. It is not governed by the standard laws of physics that calculate speed because the object is a) passing through subspace, b) traveling at the same SPEED it was moving at prior to entering warp and c) moving from point 1 to point 2 via a direct path through space, though not necessarily subspace.

With this criteria in mind, a simplistic hypothesis is that, for the split second the ship is at warp, it truly IS in two places at once. Subspace is not like normal space in that it is incredibly difficult to detect objects within it unless there is a 'window' through which to view the object. This is why it is easy to both detect and see an object at warp while at warp oneself. If the object doing the 'sensing' is not actively in subspace OR scanning subspace itself, then there is no way to physically see the object being 'sensed' because light is not being absorbed, reflected or refracted by it.

This is why, even WITH FTL sensors, it would be impossible to accurately target the real vessel. It would physically exist in one location, while visually exist in both as the effects of light on it would be relevant in both locations for the time it took the maneuver to happen. For the split second that the 'first' ship was visible, the sensors would still be 'locked on' to it since they had no other reason to assume it had moved. As others have argued, the information simply hadn't updated to the new location yet.

Think of it this way. If you see a block, can touch a block, can taste a block and can smell a block then why do you need to continually touch, taste and smell it? It is obviously a block, therefore seeing it makes it just as real as before. The ships computer does not need to constantly change it's power usage on the previously scanned object unless something actually happens, which the short range passive sensors would pick up. That data takes time to process though, and that is more than enough time for the block to be hit by a bullet and strike you before you had a chance to dodge.

11
How did Picard send a binary message to Data in the future?
14
Is Sisko referring to the events of First Contact here and if so how does it affect things?
13
Why aren't tractor beams used as defense or offense weapons more in Star Trek?
23
How much energy could the Enterprise-D produce?
11
Why did Picard abandon the USS Stargazer and leave it to float in space?
11
Has any command structure officer ever given an order to a superior (in terms of rank) officer?
12
Has there ever been a warp / non-warp collision?
3
How did Picard's away team transport so far in First Contact and not be detected by the Vulcans?
1
How does Starfleet's recording or measuring of time vary throughout the galaxy?