This film or maybe a series of films, which I think was Russian, involves some humans who live on a planet. They believe that the planet that they live on is hollow and that they live on its inner shell. One of these humans explains to the main character that this is what they believe. The main character explains to this other character that this is incorrect, and that it is possible to fly to and from the planet by means of spaceship.

Another scene involves a character in a helicopter or some other flying machine. There is a bomb aboard it, and the character constantly hears warnings that say "Warning, self-destruct mechanism activated". I think he ends up jumping out of the flying machine to save himself?

The last scene I remember shows a military force that has come to retrieve this character. One of the commanders issues an order to deploy an incapacitating gas to the region where the character is located, and the military does so. The scene shows several troops going to the location and picking up the main character. Delirious from the effects of the gas, he sees one of the soldiers and mutters "Goddess" (RU: Богиня)as they take him away.

It turns out I was conflating two different films. The first of these is "Habitable Island" 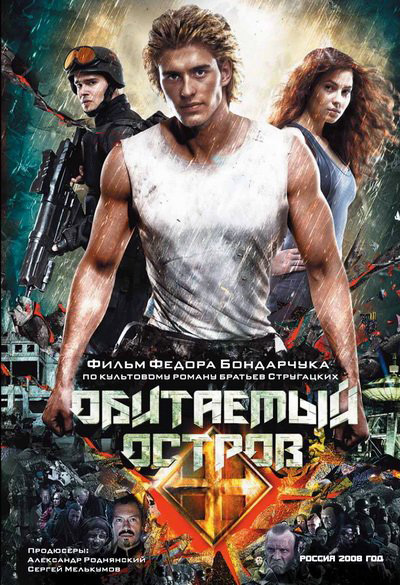 The main character, Maxim, crash-lands on the planet of Saraksh and is taken in by a couple of the locals. From them, he learns that the nation in which he is in is ruled by a group of anonymous leaders known as the Unknown Fathers. He falls in love with the woman and learns from her that the natives believe that they live on the inside of a hollow planet, with the star in the center, and that this is the entirety of the universe. He ends up joining a group of rebels against the Unknown Fathers and learns that the Fathers are brainwashing the populace. As part of the Unknown Fathers' brainwashing of Saraksh, the common people are led to believe the part about them living in a hollow planet.

The second film is "It's Hard to be a God" 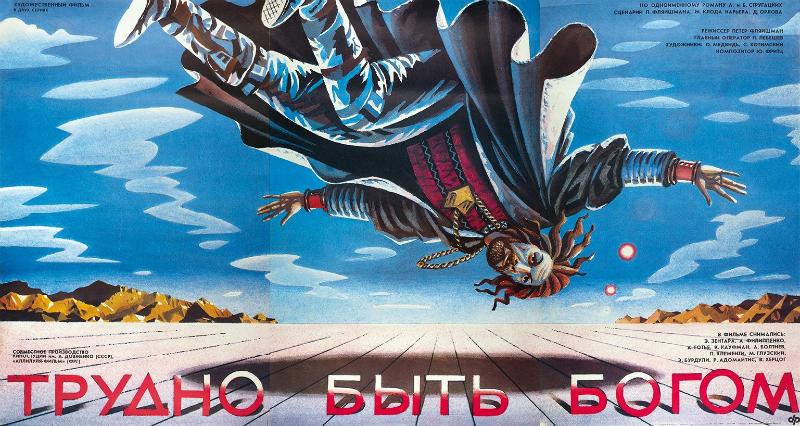 Here, the main character, Anton, is sent to a planet that lives in the Middle Ages by a group of technologically advanced humans. In particular, he is sent to the kingdom of Arkanar. Their goal is to observe the natives of the planet to learn more about their own nature. Throughout the course of the movie, Anton's superiors watch him from their spaceship. However, seeing how religiously fanatical and anti-intellectual the planet's society is, Anton goes against his orders and instead fights to depose the tyrant Raba, who has killed the king and now wants his own religious order to rule over Arkanar. Back at his base of operations, he is instructed to return to the spacecraft at once, but defies his orders and flies back to Arkanar by means of a helicopter. In an attempt to stop him, his superiors remotely activate a self-destruct mechanism aboard the helicopter, but give him three minutes so that he may land and save himself. Anton still decides to get to Arkanar. He does end up jumping out of the helicopter as the countdown ticks down.

At the very end, Anton uses one of his advanced weapons to kill Raba. His superiors, seeing the situation, decide to intervene, first by hitting Anton with a paralyzing ray. One of the natives then grabs Anton's weapon and starts shooting at everyone. Then, Anton's superiors decide to flood the area with a sleeping gas and retrieve Anton. The native who grabbed Anton's gun sees one of the humans from the spacecraft and mutters "goddess" before he succumbs to the gas. The humans from the spacecraft are not a military force, however.

I originally found out that this is the other movie that I was thinking of by searching on Google and then found a website containing movie transcripts called cinematext. "It's hard to be a god" was the result of searching for the "Self-destruct mechanism activated" bit. http://cinematext.ru/movie/trudno-byt-bogom-1989/?page=18

8
Low-budget scifi movie: humans at war with mind-controlling aliens crash-land on jungle planet with crystal growths
15
Humans genetically altered to live underwater after crashing on a planet
5
What book is about a planet of feline humans?
33
Robots on planet with no humans until a rocket with a human lands
10
In which post apocalyptic SF novel is the South Pole (Antarctica) thawed? Humans live there
5
Film with a genie transported to modern England and trapped in a television set
6
Humans travel to earth-like planet to colonize but find peaceful aliens
3
Story about a star-system sized spaceship and a race of Nanobot-enhanced future humans that live basically forever
9
Old movie where main role reset whole planet earth timeline to the beginning of life on Earth