I believe this was a short story and I think I read it in a collection of other short stories. It focuses on the consequences for a number of characters after someone doses a city's water supply with a non-lethal amnesiac drug that leaves everyone unable to remember their names or who they are (but doesn't affect their ability to talk etc).

In particular, one of the characters is a finance dealer with an excellent memory who is using clients' money to carry out deals, paying them back out of the proceeds - he is keeping track of the transactions by memory alone so he has a bit of a problem. Another character is a woman in an unhappy marriage.

The drug wears off after about 24-48 hours and the character's situation is addressed but left somewhat open ended.

This might be "How It Was When the Past Went Away" (1969) by Robert Silverberg.

The story is set in San Francisco, where a radical dumps an amnesia drug in the city water supply:

The day that an antisocial fiend dumped an amnesifacient drug into the city water supply was one of the finest that San Francisco had had in a long while.

The story then follows the effects on various characters, one of whom is stealing money from people and forgets the details:

A man in Freddy Munson's position had to be orderly. At any given time, his thefts from his clients ranged from six to nine million dollars, and he kept all the details of his jugglings in his head. He couldn't trust putting them on paper, because there were scanner eyes everywhere; and he certainly didn't dare employ the data net, since it was well known that anything you confided to one computer was bound to be accessible to some other computer somewhere, no matter how tight a privacy seal you slapped on it. So Munson had to remember the intricacies of fifty or more illicit transactions, a constantly changing chain of embezzlements, and a man who practices such necessary disciplines of memory soon gets into the habit of extending discipline to every phase of his life.

"Well, we've got a good jolt of acetylcholine terminase," Madison said, "which will louse up the synapses and interfere with short-term memory fixation. Then there's something else, perhaps a puromycin-derivative protein dissolver, which is going to work on the brain-RNA and smashing up older memories. I suspect also that we've been getting one of the newer experimental amnesifacients, something that I haven't isolated yet, capable of working its way deep and cutting out really basic motor patterns. So they've hit us high, low, and middle."

Dr. Bryce and his wife Lisa lose the past 5 years of their life (including their marriage); Paul Mueller (an artist) and his ex-wife Caroline lose about 6 months (including their divorce). Munson, the embezzling stock-broker, only loses 5 weeks, but since his illicit trades have to reconcile every month he is hopelessly lost.

The situation stabilizes after a weekend, but it's not so much that the drug wears off as people start to cope, or give up:

The crisis, of course, was nowhere near as close to being over as Commander Braskett's speech had suggested, but public confidence had to be buoyed.

Bryce had the latest figures. Suicides now totaled 900 since the start of trouble on Wednesday; Sunday had been an unexpectedly bad day. At least 40,000 people were still unaccounted for, although they were tracing 1,000 an hour and getting them back to their families or else into an intensive-care section. Probably 750,000 more continued to have memory difficulties. Most children had fully recovered, and many of the women were mending; but older people, and men in general, had experienced scarcely any memory recapture. Even those who were nearly healed had no recall of events of Tuesday and Wednesday, and probably never would; for large numbers of people, though, big blocks of the past would have to be learned from the outside, like history lessons.

There are resolutions for individual characters though: Dr. Bryce will have to learn everything about his marriage from Lisa; Munson liquidates what he can and flees to the Moon. A performer who traded on his photographic memory commits suicide, since he has lost so much. Paul and Caroline will try again, without the memory of Paul's business failure blocking his creativity. And Nate Haldersen, who for a decade was paralyzed by guilt over his family's death, founds a new religion, the Church of Oblivion, whose adherents will take amnesifacient drugs until they forget their pain.

It was published in the anthology Three for Tomorrow along with novellas by Blish and Zelazny. 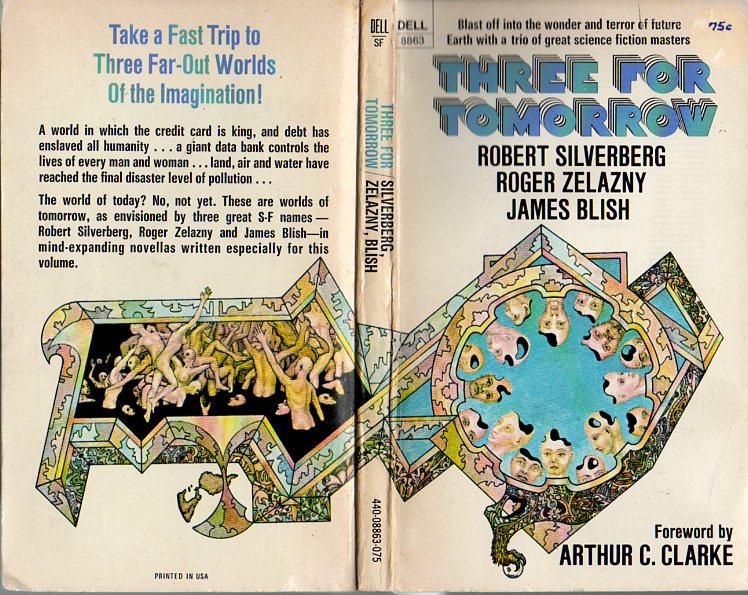