There was a boy and a girl, and they were doing time traveling. Mechanic person guarding a big clock, his hands like clock hands. Like some time guardian.

Finders Keepers, also known as The Finder, is an Australian children's television show, directed by Scott Hicks, that first aired on 28 October 1991, based on a book by Emily Rodda. The story revolves around a boy called Patrick who, whilst playing on a computer, receives an invitation to take part on a TV game show called "Finders Keepers" through a store in a shopping arcade. He accepts the invitation and is sucked into another world where he is given clues to find missing treasures from his own world and take part in an interdimensional hunt.

Your 'Mechanic person' may be the creepy Clock Robot: 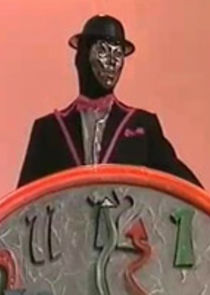 Not the answer you're looking for? Browse other questions tagged story-identification time-travel tv or ask your own question.

2
What novel/tv-show featured travel to another dimension through a TV?

33
Title of a time travel movie involving a boy in alien armor and a girl?
5
Book where boy/girl teleport/time travel with device that uses mobius strip
5
Looking for a book about a boy and a girl that could fly
5
SF Story - Boy/Man with acute senses and sense of time
17
First book of a series: boy disappears from his life, becomes time travelling agent
5
I was reading a book about a boy who was able to travel through time, and i am trying to remember its name
5
Book about a girl with magic and a boy a with curse
9
Sci-fi manga about a boy with an alien girl classmate
5
Cartoon MC: 2 boy and 1 girl fight evil