'80s novella about a computer running everything, which is destroyed by a punch card

I have been trying to find even a reference to this book and haven't been able to do so. I read it in the early '80s, but it might have been published a bit earlier. It was a rather small mass market paperback novella, maybe about 100 pages, with a black cover. I think the title was in green-screen letters.

What I remember of the story was that someone was bringing this computer online to run the entire country (more or less) and I think it was becoming self-aware. But there was a sub-plot about a suburban woman frustrated with something like an electric bill, who got a punch card she had to do something with and return. The card had the old "Do not fold, spindle, or mutilate" warning. So in annoyance, she carefully washed and ironed it dry, shrinking it by like 1/16", and in the end, it caused the card reader to jam and brought down the entire system.

I was quite sure the title was "Ultima One", but there is no search I've tried that brings up anything relevant.

This is Ultima One by Richard P. Stoughton.

Per this brief review;

A complex computer network gets out of control and endangers the world. 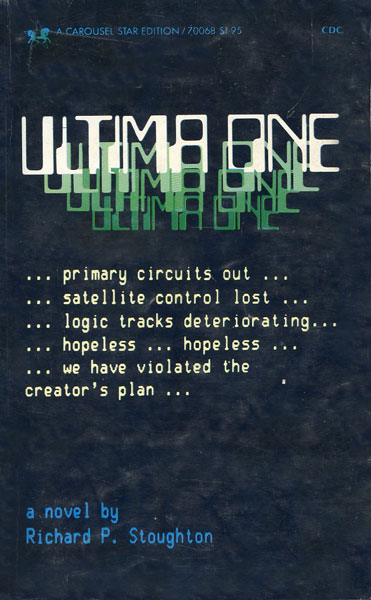 Note that this is a 1980 novella (191 pages) with a black cover with green screen letters.

Not the answer you're looking for? Browse other questions tagged story-identification artificial-intelligence computers novella or ask your own question.

8
Low-budget '80s movie about a deaf computer genius
11
Short story or novella about a man who remembers everything
6
Novella set in futuristic environmentally focussed portion of USA
35
Short story about a vast, telepathic, amoeba-like creature that covers an entire planet
10
Science Fiction/Fantasy paperback where a phoenix bird ate jewels like rubies and emeralds
7
Title of a "Spy vs Extraterrestrials" Novella set on Pacific Island?