What's this novel? A mathematician turned marine is transported to the future

I read this novel some time in the 90s, not sure when it was written.

The time travel had to happen at certain times, the interface of air and water, early morning. I think in the backstory he had precalculated an interface and stepped through it.

The story is set in or near the Shenandoah Valley. The protaganist keeps his mathematical history quiet and acts as a military support for someone, perhaps a woman, who flies a helicopter and starts the novel mostly brainwashed by the powers that be. He uses standard US marine tactics, unknown in the new time, to defeat guerilla enemies

Gradually he convinces the helicopter pilot and some others that the history they have known is false, and they all escape together on the helicopter into the South American rainforest ready for a new time travel interface.

Anyone know this book?

The book is The Douglas Convolution by Edward Llewellyn. It was published in 1979 and the cover art had a picture of a man hanging out of a helicopter with a rifle. 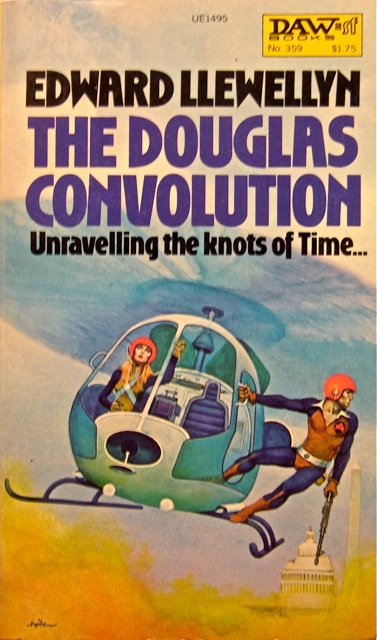 I too read the book a long time ago. It's available on Amazon used. I was only able to find the book by using your reference to the Shenandoah Valley, thanks.

6
Teen Book with Two Boys Transported to Future
23
Science-Fiction Novel - Female Mathematician - Late '90s?
7
Book about a mathematician turned into a dragon
9
Secret agent that also sings opera and travels through windows
4
What's the name of the short story in which a man walks home from the future?