Why does the word "Mapone" have this effect on Bullseye?

Daredevil: End of Days opens amidst a brutal battle between Daredevil and Bullseye. Daredevil is on the losing end of the fight and says the single word "Mapone".

Bullseye flies into an uncontrollable rage and kills Daredevil.

During Ben Urich's quest to find out what "Mapone" meant, he is told

by The Punisher that Daredevil knew Bullseye would kill him for saying that word - that it was a one-way switch that there was no recovering from. Of course, Frank didn't actually know what "Mapone" meant (or was still unwilling to reveal it).

In the last pages of the series, we learn that

"Mapone" is the name of Daredevil 's daughter with Natasha Romanava.

But what about this fact/word would cause Bullseye to lose control and kill Daredevil?

The short answer is that your confusion stems from the fact that this element of the story literally makes no sense, something that even the writers are apparently willing to acknowledge. 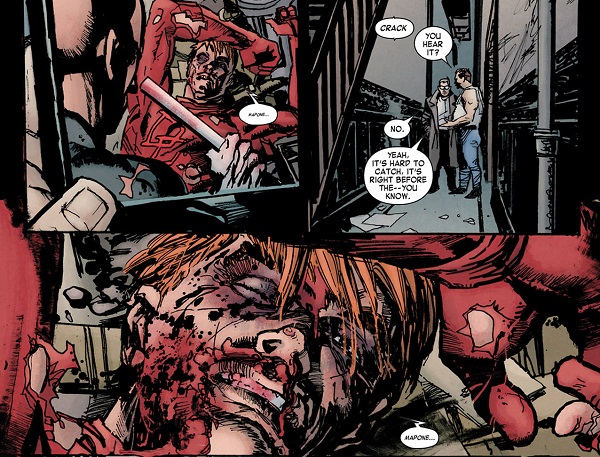 Daredevil and Bullseye were fighting. Just before Bullseye kills him, Daredevil says "Mapone, Mapone" (the name of his daughter with Black Widow) which supposedly drives Bullseye into a killing rage. Ben Urich then spends the next 6 issues meandering about trying to find out who or what that word means in a clear homage to Citizen Kane's "Rosebud".

The word itself didn't cause the murder, as head writer Brian Michael Bendis acknowledges in his blog;

Anonymous : Just finished Daredevil: End of Days #8 and have to say it's been an amazing series. I'm a little confused with one thing though and was wondering if you could clarify. Why did the word "Mapone" drive Bullseye insane in the first issue when we find out the meaning behind the word?

Bendis : Let’s make it very clear that Bullseye was insane, self-destructive and violent loooong before he heard this word. The fact that Matt got the last word in tipped him over the edge

First: The word doesn't drive Bullseye into a murderous rage. Note that on pg. 3 of Issue #1, he says he's going to kill Daredevil before "Mapone" is said.

Second: Punisher doesn't say that Daredevil knew it would drive Bullseye into a murderous rage. He says that it was designed to fuck with Bullseye's head, with the implication that it's the reason Bullseye committed suicide.

Third: The Punisher is almost certainly wrong about this (or lying). With the final revelation, it's fairly clear that Mapone killed Bullseye.

A far more likely explanation for Matt's choice of final words is actually what the Punisher tells Tim at the end of the story: Guilt for leaving his daughter without a father. (Note that this comes as part of a whole sequence of interactions in which it's revealed that people were lying to Ben Urich during his investigation.)

A far more interesting question is the identity of the person living in Room #237. Most of the clues seem to point at this being where Matt was staying during his "missing time", but this doesn't quite seem to gel with him simultaneously training Tim as a protege.

Except Bendis' explanation still doesn't really hold water, because what everyone has mentioned here is not the whole story.

Before the end, before Ben died and Mapone was explained, Ben found Bullseye's apartment and went through his computer, which had folders on the desktop saying MAP and ONE. Ben looked inside and looked shocked by whatever he found, but it was never explained or mentioned again.

So...it would sure seem that Mapone really did mean something to Bullseye. Either a complete coincidence that his secret files had that name and he flipped out and killed himself just because Daredevil knew about his files, which makes no sense at all, or Bullseye knew about the daughter Mapone, which makes even less sense, because why would hearing a name he already knew about cause him to kill himself? In fact, knowing the character of Bullseye, if he knew about Daredevil having a daughter I would sure as hell think he would have gone after her too.

Sorry, it just doesn't make sense no matter how you try to interpret it.

1
What did Bruce Banner whisper to General Ross in Hulk #3?

13
Is "the Man Without Fear" just a marketing term for Daredevil, or does it reference something?
8
Does Stick have mental powers?
9
Why does Jessica Jones have this power in the TV show?
3
Why didn't Daredevil do this sooner?
3
Why wasn't Daredevil bothered by this event?
12
Why does Spider-Man's suit have this feature in Homecoming?
16
Why does Heimdall teleport this character?
4
Why does Pilgrim kill this character?
13
What does this word written on Avengers Tower signify?