I am trying to identify a sci-fi movie from the 80's or 90's, with the following parameters:

Culture: Either people roam fairly solo and try to acquire resources to survive, or you live in a weird society where if a stranger is captured he needs to play in a game of fight to the death.

Mobility: One foil character has a giant battle-bot-looking tank as his form of transportation through the desert. Protagonist has a car that has a plastic half bubble on top to look out from.

Robot: The protagonist runs around in the beginning of the film with a female robot/android whose face is melted off after it has acid touch its face.(This scene happens next to the protagonist's rover)

Love interest: Somehow protagonist comes across female protagonist in desert. She smells really bad and is hungry. They sleep outside, and he tells her to sleep away from him. He uses a thermal blanket(the first I ever saw in my life). She wakes up next to him, smelling horrible. He bathes her in some water hole they find(as if water were not scarce and they could just waste water.)

Pupa monsters: Scene where they are in a building and they are trying to get out. They come across a room that is white, in which multiple giant, white, snot, pupa are hanging securely from the ceiling. Through curiosity, they disturb them, and now they have to get out of that room fast.

Boss Antagonist: Pervert bionic man, that is actually attached to a giant robotic arm, as only form of movement. He is in black and has a pale bald head as his most human looking part.

I'm almost sure you're after Spacehunter: Adventures in the Forbidden Zone

A bounty hunter lands on an alien planet, trying to track down three Earth women whose ship crashlanded there. He rescues Niki (played by a very young Molly Ringwald), who's been living alone on the planet; and goes looking for the women. They've been captured by Overdog (played by Michael Ironsides), who's some kind of cyborg. 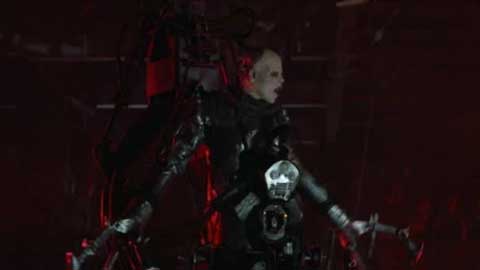 Not the answer you're looking for? Browse other questions tagged story-identification post-apocalyptic androids or ask your own question.

6
Movie with a man/woman fighting over a giant truck in the desert
9
Post apocalypse movie from the 70s or 80s with a truck in it
6
80s movie with futuristic vehicle with dome on top in desert-like universe
8
Film with a female android pilot that is destroyed near the start
6
Identify a movie from the 80s: desert, water sirens
4
TV movie: Man travels in a kind of tank with a robot woman
9
Mad Max-type Sci-fi movie from the mid-80's with fat blob men
4
Part-machine scavenger with a red eye trying to save a girl from a tank with spikes and saws
6
Movie about a sandy planet

7
Man and woman travelling through parallel universe?
9
Looking For A Groovy Story I Read As A Child
14
Book about people living in giant hotels
8
Story About Massive Retaliation - Last Man and Woman Scenario - Woman Mentally Challenged
2
80's or maybe early 90's movie, nuclear wasteland, bunch of people in a truck driving through the desert
6
A book where a man inhabits the body of a dying man and befriends a telepathic cat
6
80s/90s zombie(?) movie with a “stolen record” of a shower scene
12
Can you identify this apocalyptic youtube film about a scrap metal robot?