I am looking for an older series about space colonization [duplicate]

Ask Question
Asked 7 years ago
Active 7 years ago
Viewed 317 times
7
This question already has answers here:
Sci-fi series where humans are reduced to a mathematical pattern and sent to another planet (3 answers)
Closed 2 years ago.

Way back in high school I read a series about colonization of other planets. In the books, contact was lost with the rest of the civilization and over time people with mathematical ability were able to control the computers that were doing the terraforming...and later came to be seen as wizards. I cannot for the life of me remember the author or title...can anyone help?

It's hard to be sure, because the level of detail is scant, but one series I know of that meets your stated criteria is the Soul Rider series by Jack Chalker.

The intro from book 5 gives a nice description of the series;

But only the wizards of World, those with the power, could command anything from those great machines, and they were as limited as always. None could again get into the great control rooms of the ancients nor speak directly to the tremendous thinking machines that ran everything automatically. The Gates themselves were almost an afterthought; they had been closed, and set to "outgoing," but they had been locked.

Nobody really knew how they worked, or how to use them, and the computers had been strictly limited by the ancients so that even if they possessed that knowledge they could neither release or reveal it. 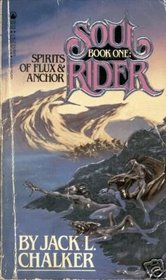 13
A trilogy which started as fantasy but ended up as science fiction
6
Sci-fi series where humans are reduced to a mathematical pattern and sent to another planet
12
Book/series describing the evolution of religious practices - Christian/Muslim to Sun Worship
7
Name of the book/series based on magicians who tap into computer grid?
14
Book Identification: Alternate dimension of energy enables FTL travel and colonization
7
Novel about a woman that could follow strings of flux to travel

8
Identify a book and sequel about Mattias Hand, inventor and Prince who is exiled
21
I'm looking for a book series about a Queen that time travels to save her people
5
Looking for YA fantasy novel involving Medieval Princess who time travels through a Lake
22
Sci-Fi book with 4 prison planets
3
Book series, Reincarnation, Different Gods and Goddess?
9
Looking for short story about man whose brain shuts down on him
6
YA book series about alien teenagers who (maybe) time travel on Earth