Who wrote the book Arena?

I once had a book called Arena. Unfortunately that is a very common book title. Its cover was very similar to: 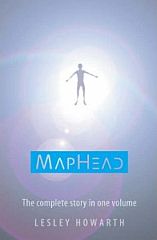 but that's a coincidence.

In the story, the main character (female), is invited to take part in an experiment. In the experiment she is transported to another world. (I'm pretty sure it was virtual reality.) The world has 3 sections:

The first section everything is fairly simple. You just have to stay on the path, and walk to the end, and insert the key into a door. But no one ever does. (The get off the path, and turn their keys into weapons etc). There is a town at the base of the wall (I think it is infinitely high, people try to climb it). Along the way there are safe houses that can be accessed with the keys.

The second area is (I think) a staging ground.
There is a library and a team gathers to try and, I think cross the wasteland, and then get into a city (it was full of goblin equivalents).

The third area is the city and the wasteland. At the end, the main character makes it out, (There must be a gate at the center of the city).

One of her friends (male), was shot on the way, but she meets him back in real life but he has no memory. (Only people who legitimately escaped keep there memory). It was theorised the guys conducting the experiment must have been aliens because their technology was so advanced.

The book has at least one sequel. (I managed to hunt the book down once before when I when back to the library I first found it.) It was published during or before 2005.

On of my friends has had the exact same problem, trying to find it. (I mentioned this book I read, called "Arena", and he was like "I read a great book called Arena once, but I can't remember the author name, and there are so many others.". Eventually we worked out it was the same book.

Any help finding the author name would be appreciated.

If you search for the title Arena on ISFDB and only look at the exact matches and skip the short stories, you're left with just three possibilities: Julian Jay Savarin 1979, William R. Forstchen 1994 and Karen Hancock 2002.

ISFDB has covers for some of the editions. You can also search for summaries on the web. 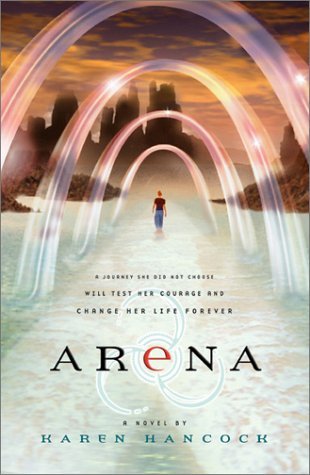 Karen Hancock? If I search "Arena" on Amazon.com filtered on Books, it is the first result. You can read the first chapter on Amazon.

Callie Hayes grudgingly agrees to participate in a psychology study as moral support for a friend. However, frightened by the examiners' secrecy and evasiveness (one vanishes before her eyes), she tries to escape but finds herself cast into the Arena, a testing ground for participants of the study. Armed with only a guidebook and minimal supplies, she is soon forced to trust the enigmatic Pierce, a man who claims to have spent the past five years in the Arena. As Callie journeys toward the Gate, supposedly her ticket out, she learns more about the mysterious Benefactor conducting the test and uses her developing faith in him to find the way home. However, this path is laid with false trails, traps, and false messiahs eager to destroy Callie and the friends she makes along the way. Hancock's first novel is an allegorical blend of fantasy and sf depicting the tests a soul faces that strengthen or destroy belief in God. Hints of the post-apocalyptic world of Mad Max surface, along with the sense of climbing through the wardrobe into C.S. Lewis's allegorical Narnia.

8
Book about a mysterious girl and evil non-human pursuers
9
Sci-fi quest/adventure book where progress was determined through clues/keys in the illustrations with red boss demon at the end?
3
Help me identify a fantasy book please
4
Looking for a book about a slave that gathers friends and goes into a desert to find a dragon
5
Young Adult Sci Fi Book - Girl goes to “academy”
6
Trying to recall the title of a series of fantasy books about wizards with keys
8
Fantasy book with an incompetent young magician