Could Data or Odo be knocked out with a hypospray?

(I don't know if it's okay to ask about two different characters in the same question. I doubt it, but someone please let me know.)

We know that Data's systems can be affected on occasion (see "The Naked Now"); also, sufficiently powerful energy creatures can overtake him ("Power Play"). So I'm wondering if a souped-up hypospray could disable his systems. Could something be devised that could mimic the introduction of an alien program (as what occurred in "Contagion"), or render him asunder in some other way?

Admittedly, I'm not an expert on DS9, so possibly this was discussed during the show. But could a changeling be knocked out by a hypospray? Changelings have high resistance, as shown multiple times, so their "immune system" surely works quite well (except against engineered diseases, of course). As biological beings, I don't see why changelings couldn't be put down by a hypospray, though it'd undoubtedly take much research into the matter.

Yes, you could incapacitate Data.

In TNG "The Naked Now" a dying red giant star causes a form of intoxication in the bodies of the crew. Including Data.

(Data enters, smiling and weaving slightly)
PICARD: Ah, Data. At least you're functioning.
DATA: Fully, Captain.
PICARD: Data, intoxication is a human condition. Your mind is different, it's not the same as...
DATA: We are more alike than unlike, my dear Captain. I have pores. Humans have pores. I have fingerprints. Humans have fingerprints. My chemical nutrients are like your blood. If you prick me, do I not leak?
(Data makes as if to lean on a chair, but there is nothing there and he falls) 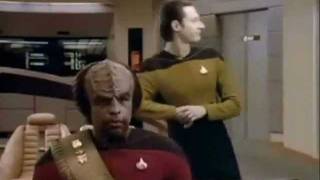 If you would synthesize the substance causing it, you could administer it to him using a hypospray. Later that episode the antidote is administered to him via an hypospray so we know he is susceptible to it.

Odo is susceptible to hyposprays too, as in DS9 "Extreme Measures" the cure to the Founder-Disease is administered to him using a hypospray. If there is a substance that could incapacitate him, I don't know. It is conceivable that Section 31 developed one, but that we don't know.

A hypospray could definitely be used on Data; the device's only function is to send a liquid through the skin, and I believe that Data's "skin" was made of a rubber-like material. So you could, in principle, use a hypospray to get a liquid in contact with Data's internal mechanisms. Whether or not you could use that liquid to incapacitate him is another matter.

There's no medical consensus on how sedatives chemically affect humans, but they do seem to require either a respiratory or circular system, neither of which Data has (although he presents a convincing facsimile, as Julian Bashir notes). However, if you could devise a chemical that disrupted Data's positronic net, or his motor functions, or had some other affect that would roughly equate to "sedation", in principle I believe a hypospray could be a delivery mechanism.

Odo is a slightly more complicated example. While in humanoid form, or in his natural liquid state, I suspect that a hypospray could penetrate Odo, because like Data his "skin" is reasonably similar to another humanoid's. It's unclear what would happen if you tried to dose a Changeling while it was taking the form of a rock, or fog (a form the rogue Changeling Laas assumes on one occasion).

It would also seem to be possible to affect Changelings chemically, as Section 31 proves towards the end of DS9. With enough research, a brilliant scientist may be able to devise a liquid compound that would "sedate" a Changeling. However, it would certainly be nothing like what you'd use on a humanoid. Odo doesn't have a circulatory system, or a respiratory systen, or any internal system even close to a humanoid's.

Tl;dr: In principle you could knock both out, but you wouldn't be able to use a compound like what you'd use on a human.

51
Why could Data not use contractions?
40
Could Data pass the Kobayashi Maru?
22
Could Data have taken out Admiral Quinn?
3
Can changelings be knocked out?
11
Could Data have floored Khan with a single punch?
6
How could Odo be knocked unconscious?
7
How quickly can Data grow out his hair?
19
Could Data be replicated?