This was a story in a comic book. I don't know the title, nor the author or artist. It was definitely a comic book of (unrelated) horror stories, though. I believe I read it sometime between 1975 and 1980. (Unrelated stories – not a mainline title about a single character, like Swamp Thing.)

Another story that may have been in the same book included one about a man who had been in a car accident, and wakes up in a hospital bed, paralyzed from the neck down .. supremely uncomfortable. His wife visits, and eventually tells him he's in hell, and will be in that uncomfortable hospital bed for all eternity…

A final story that may have been in the same book was about a sculptor, an evil man, who sculpted gargoyles and monsters that he had met in person, on his visits to hell. He died when one of his sculptures fell on him.

The rat story sounds like "The Exterminator" by Mike Pellowski, originally collected in Ghostly Tales #118

The story is about a rat exterminator truly great at his job, and what happens when the rats hire an exterminator of their own. 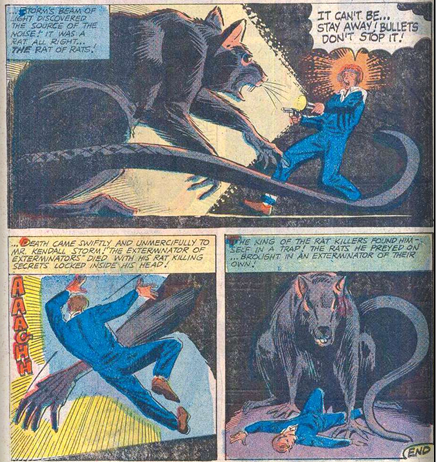 10
Been trying to find graphic novel for decades - at least I think it's a graphic novel
6
Comic/tabletop RPG about mice with swords and shields going on adventures
5
Comic - woman in dystopian world
14
Death of a skin changer: what short story is this?
55
Comicbook short story where a man inherits a clock that tells when you die
7
Looking for surrealist/ridicule book about a boy with a wingsuit
4
Fantasy short story collection, including a fire salamander girl, a were-cougar, an anxious girl turned into a rat, and maybe a half-bigfoot girl
7
Short story about a deaf man, who cuts people tongues