Does one's ability to use the Force depend on distance?

In all the action scenes I'm familiar with, the Force is used only on people or objects nearby within visual sight of the Force user.

However there are situations where force users can sense something outside their own physical perception limitations, such as when Vader knows that Luke is on a particular space craft, or when a million voices cried out and were silenced.

Does Luke's ability to sense when his friends are in danger also suggest that he is able to help them at a distance, or communicate with leia at a distance?

The Force can be used from very far away

The Force can be used at a considerable distance, both for communication and for attack.

So it’s clear that the Force does not require close physical proximity, or even necessarily line of sight.

However, it is still limited by distance

None of the previous examples should be construed as implying that distance is irrelevant when it comes to the Force, however. These are rare instances, and the people involved are more powerful than the average force wielder. Palpatine, for example, is the most powerful Sith Lord met thus far, with powers significantly in excess of Count Dooku’s. Besides Palpatine and Vader, we have not seen any other Force user in canon employ Force telekinesis on any kind outside of their immediate proximity, and only Palpatine over such a distance—a rather strong indication that this is not a common talent.

It seems clear that Force choking someone from afar is the mark of a very powerful Force wielder. Mother Talzin is no hack either, having gone toe-to-toe with Mace Windu.5 Even Sidious sought out her knowledge in his youth.6 For Force wielders less skilled than Talzin, Sidious, or Vader, attacking someone with the Force from afar might well be impossible. It seems likely that it is more difficult to affect someone nearby, though, even for those capable of doing so. In Sidious and Vader’s cases, it also seems to require line of sight (or perhaps merely precise knowledge of someone’s location), whereas using the Force on those nearby does not require this (as illustrated by Barriss Offee7 and Darth Sidious’s8 examples).

In the case of communication, the only instance of interstellar Force communication that we know of for sure involved the Jedi Temple as a conduit. It is possible that even Yoda could not communicate over such a distance without that aid: even likely, considering that he had not contacted the rebels before.

1: The Empire Strikes Back

5: The Clone Wars: “The Disappeared”

8: The Clone Wars: “The Jedi Who Knew Too Much”

Based on Star Wars: The Last Jedi, you can conclusively say that the Force can easily be used over a distance, however, it may depend on the Force strength of the individual.

Kylo Ren initiates contact and has conversations with Rey as if they are sitting in a room next to each other even though Kylo is on a Star Destroyer chasing the Resistance fleet and she is on Ahch-To with Luke Skywalker.

And later in the movie

Luke Skywalker appears on Crait with his sister and the rest of the Resistance in order to defend them from his nephew. But we learn that Luke never left Ahch-To and was projecting himself across the light years via the Force. That effort does take a toll on Luke however as he vanishes at the end of the movie, presumably dying and joining the Force as Obi-Wan and Yoda did previously.

The Joorus C'baoth (be aware of spoilers) clone that appears in Thrawn trilogy is capable of maintaining mind contact with operators in ships across the galaxy, giving them orders during a battle. He is also capable of using the same contact with Luke, who felt it similarly to a Force ghost (I don't have a quote right now, but it happens in the first book of the trilogy.

Also, in the first book Mara Jade is able to locate Luke when he is lost in a dead space zone.

Force can probably be used on large distances, but not on the most physical ways.

(also I'm not sure about that but still: doesn't Vader chokes an imperial officer from a ship to another in ESB, when the officer goes out of hyperspace too close to hoth right bifore the imperial attacc? )

communicate with leia at a distance 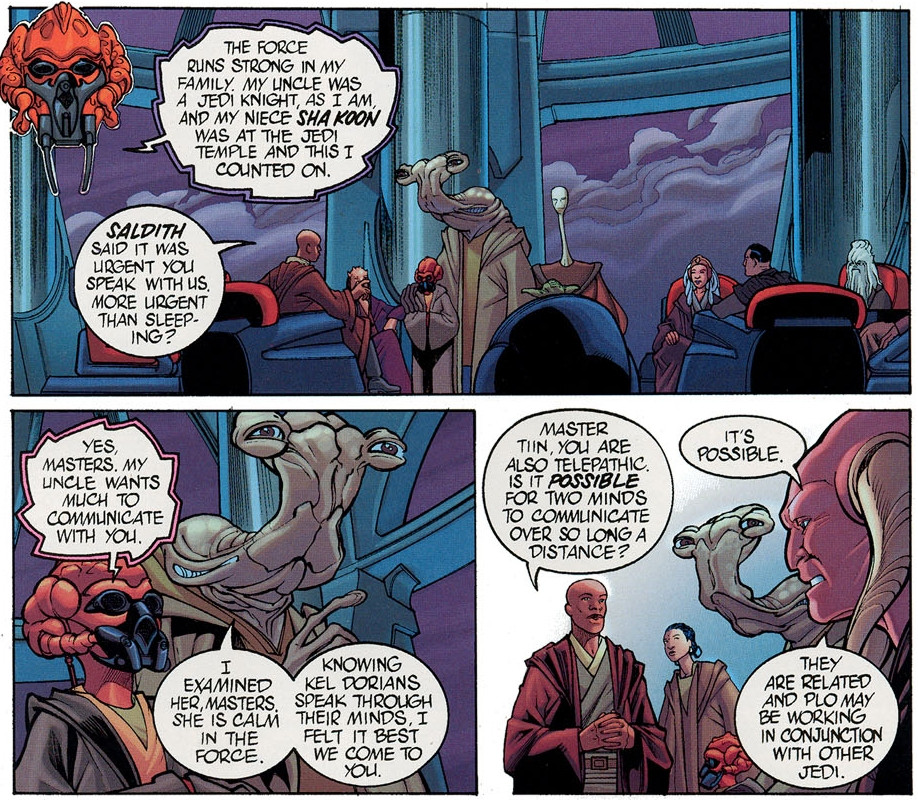 he is able to help them at a distance

I don't think it's known outside the planetary system scale. In-planetary scale, ships in orbit could be pushed by combined power of several Jedi in "Champions of the Force", but it was a difficult task resulting on one Jedi's death as per Zoredache's comment

26
Does Jar-Jar have some Force ability?
28
Why did the Emperor fail to foresee his own death?
113
When and how does Vader learn that Luke is his son?
2
Did Obi-Wan Kenobi prefer Luke over Leia?
2
Can one's future self cause one's past self to have a Force vision?
3
Why did Poe and Finn's TIE Fighter land so close to the scavenger town?
50
Why was Darth Vader more of a Jedi than Anakin?
12
When/why do Jedi and Sith say "destroy" instead of "kill"?
7
Did Obi-Wan Kenobi know how to destroy the Death Star without the help of the stolen plans?