One of the changes made to the Special Editions of Star Wars: Episode VI: Return of the Jedi was at the end of the film. Luke sees 3 ghosts during the celebration on the forest moon of Endor, Yoda, Anakin, and Obi-Wan. In the Special Editions, the actor who played Anakin earlier in the film, Sebastian Shaw, is replaced with Hayden Christiansen who played young Anakin in Episodes 2 and 3. 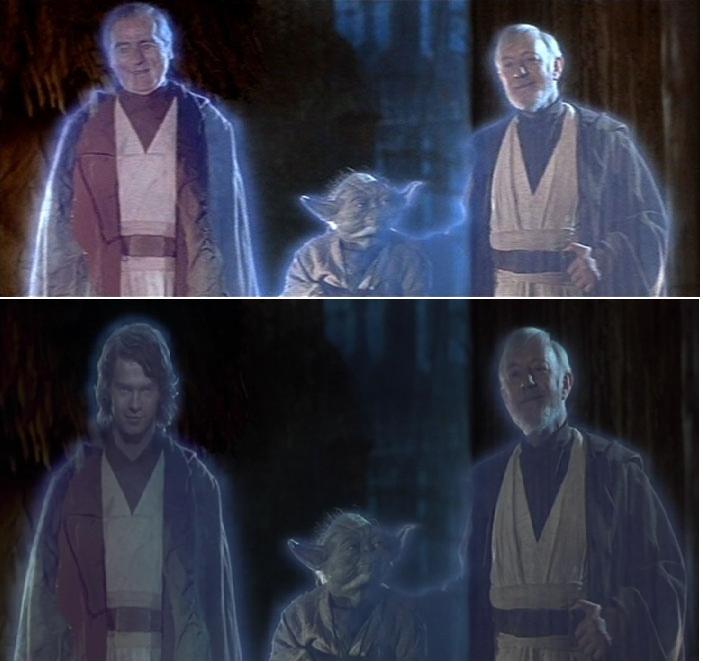 My question is, why is Anakin the only one de-aged? Shouldn't Obi-Wan also be his younger self, along with Yoda?

Anakin is the only one de-aged because Anakin hasn't lived the past 30 or so years - Anakin was more or less killed by Darth Vader. He left behind the parts that made him Anakin Skywalker when he lead the clones into the Temple.

When he was redeemed by Luke, he reclaimed those parts of him. His sense of honor, pride, decency, love, etc were all restored. His mental self-image would likely have returned to the way it had been when he last felt that way - as a young man.

The out-of-universe reason? Controversy sells better. Also, Shaw doesn't look a thing like Anakin ever did (on screen), so there would be a major disconnect for first-time viewers if he weren't replaced by Hayden.

With the release of the prequel trilogy, I imagine Hayden Christiansen is now more immediately recognizable as Anakin/Vader than Sebastian Shaw, whereas old Yoda and Obi-wan are still just as recognizable as their younger counterparts (and thus no change is needed for them).

When you consider that the only time we actually see Sebastian Shaw prior is for a brief period when Vader takes off his mask, and even then it is with a bunch of makeup to show a bald, burnt, and beat-up Vader, then many people might see his ghost and think "Now who is that?... Well, Yoda and Obi-wan are there. Oh, must be Vader without all the damage". I must admit that the first time I saw the movie, that scene caused a brief moment of confusion about who the "new guy" was, since they hadn't ever shown him in that form before. Maybe the change strove to avoid this.

I think the reason is because in order to become a ghost, you must be a Jedi and not a Sith. Since Darth Vader ceased to be a Jedi when young, its ghost took the shape of the last time he was ever with the bright side of the force (i.e. Anakin).

Yes, I too think it depends on how they percieve themselves. Also, Anakin hasn't seen himself for 26 years and it's only natural to revert to the form he knows best and is most comfortable with. Also in the force it's all about mind over matter and energy, thus it would be actually possible for Obi-Wan and Yoda to look as old/young as they want to appear. They choose to appear that way, because that's how they feel they are and because that's how Luke knew them. ... Theoretically a Forceghost that is powerfull and has enough control could theoretically look however he/she/it wants, should he/she/it be able to overcome selfperception,

There is also a precedence in the original trilogy for Obi-wan being old. He already appeared as a ghost as his old age in Empire Strikes Back.

I think its less about self-image and more about Luke. Luke knew Obi-Wan as an old man, and that is the image (presumably) from which he would derive the most comfort/pride/sense of achievement. Seeing Anakin as a young, and therefore redeemed man (as in, no longer corrupted by machines/the Dark Side) would be more likely to conjure those same emotions than the older, wasted shell of a human that Anakin had become.

I think it has to do with how Obi-Wan saw himself in life. He knew what he looked like before he died, and that's how he chose to manifest himseslf as. Why would he appear as the TPM or ROTS Obi-Wan? He hasn't looked like that for many years. That's not him anymore.

As for Anakin, he appeared whole, before he turned to the dark side. Also who knows, maybe he assumed that form because he didn't know how he biologically appeared at that time. Plus, he wouldn't appear as his burnt self.

While I do think that it was some poor planning, I think there is a reason for it. The reason I would suggest would be that they are all portrayed in their most moral and just form. Obi-Wan by that time had reached his ripe age, had patience and was very Jedi like. Same for Yoda. I would go as far to say that it is showing the characters in their most pure form of being Jedi.

2
Why is the spirit of Anakin's young while Obi-Wan and Yoda's spirits are old?

30
When did George Lucas replace Anakin Skywalker's ghost in Return of the Jedi?
63
Why Was Obi Wan So Eager to Train Luke as a Jedi?
86
Why hasn't Anakin Skywalker's Force Ghost advised Kylo Ren?
3
What was the celebration at the end of Star Wars Phantom Menace?
21
Which planets were shown during the celebrations at the end of Return of the Jedi?
6
Why do the heroes in Star Wars keep letting their Force-sensitive foes detect them?