Why didn't other objects occupy the same space as the Time Traveller?

During the time travelling sequence, the world around the time machine changes, but it changes around the machine itself.

If he was travelling through time, how would the world around him know or adapt and avoid the space that the machine was taking up?

Why wouldn't the materials occupy the same space as the Traveller, just not the same time?

The Time Machine creates a bubble around it when it is operating. Thus protecting it from the changes experienced outside the time bubble. It moves in both space and time, relative to its original starting point. It temporarily displaces the matter as it passes through it on its journey.

It seems to me in the original Time Machine that Alexander Hartdegen arrives inside a rock face at one point. The appearance of the Time Machine causes the matter that would have been occupying the space within rock to be gone. No evidence to suggest whether it was permanent or not.

When something is both inside the bubble and outside the bubble (like the necklace, hand, or Morlock) they experience both passages of time simultaneously. 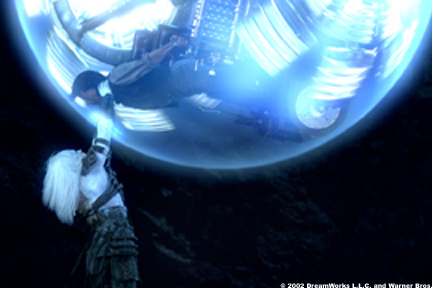 This actually happened in the 1960 version as well. In both cases, for the earlier parts (when he's traveling to the "near" future), the time machine was placed in the house of the Time Traveler, and even though the house was abandoned for many years, it was never torn down. At best, it was boarded up and abandoned. It's quite possible it was just a matter of luck that the Time Machine never had anything get in its way during the early sequences of time travel.

In the end, both movies were based off the book written in 1895 which was an allegory about class division of the time, and the exact mechanics on how a time machine would need to work weren't exactly thought out. The best explanation is probably that the time machine has a built-in safety mechanism that prevents it from coming to a complete stop unless it has a clear area around it, and it somehow sticks to the surface of the Earth while moving (let's blame gravity for that one).

Fun fact: there was a 1978 made for TV adaption that ignored the whole "the machine stays in the same place the same time" which had the hero travel to the 1692 Salem witch trials and the gold rush in 1871.

Not the answer you're looking for? Browse other questions tagged the-time-machine-2002 or ask your own question.

16
Could H.G. Wells "Time Machine" travel to an obstructed destination?