Harry Potter and the Half-Blood Prince: Why was Tonks on the 7th floor corridor in Hogwarts?

In Chapter 21 - The Unknowable Room, Tonks abandoned her duty (guarding the school) to visit Dumbledore. Upon learning that Dumbledore wasn't there she came to the 7th-floor corridor where Harry happened to be trying to force the Room of Requirement to reveal what Draco was up to.

Then this exchanged took place between Harry and Tonks:

He spun around, one-legged, and toppled over. There, to his utter astonishment, was Tonks, walking toward him as though she frequently strolled up this corridor.

"What’re you doing here?" he said, scrambling to his feet again; why did she always have to find him lying on the floor?

"His office isn't here," said Harry, "it's round the other side of the castle, behind the gargoyle —"

"I know," said Tonks. "He's not there. Apparently he's gone away again."

Isn't it odd that of all the corridors Tonks could be strolling she happened to be strolling up the 7th-floor where Harry was? I know JKR used Tonks as a red herring, and thus, her use of the literary parallelism (I.E. Harry spying on Draco on the train, Harry ends up on the floor in his invisibility cloak; Harry trying to spy on Draco on the 7th-floor, Harry ends up on the floor after hurting himself and his invisibility cloak slipping off him). Sure, it was probably lucky that she found Harry on the floor of the compartment of the Hogwarts Express after Draco was done with him. But are we to really believe the very same thing happened again so far out of the way on the 7th-floor?

Tonks is probably agonizing over her relationship with Lupin likely looking for any news on Lupin and his dangerous mission (that Dumbledore assigned to Lupin).

“Tonks’s Patronus has changed its form,” he told him. “Snape said so anyway. I didn’t know that could happen. Why would your Patronus change?”

Lupin took his time chewing his turkey and swallowing before saying slowly, “Sometimes . . . a great shock . . . an emotional upheaval . . .”

“I’ve been living among my fellows, my equals,” said Lupin. “Werewolves,” he added, at Harry’s look of incomprehension. “Nearly all of them are on Voldemort’s side. Dumbledore wanted a spy and here I was . . . ready-made.”

“Not great,” said Harry, and he told her all about Lupin’s mission among the werewolves and the difficulties he was facing. “Have you heard of this Fenrir Greyback?”

“The Prophet’s often behind the times,” said Tonks, who didn’t seem to be listening to him. “You haven’t had any letters from anyone in the Order recently?”

“No one from the Order writes to me anymore,” said Harry, “not since Sirius —”

He saw that her eyes had filled with tears.

And the meaning of Tonks’s Patronus and her mouse-colored hair, and the reason she had come running to find Dumbledore when she had heard a rumor someone had been attacked by Greyback, all suddenly became clear to Harry; it had not been Sirius that Tonks had fallen in love with after all.

Looking at the map of the 7th Floor there are plenty of corridors. If she came from Dumbledore's office and heading in the direction of Gryffindor then she would be heading down the corridor to the Gryffyndors. 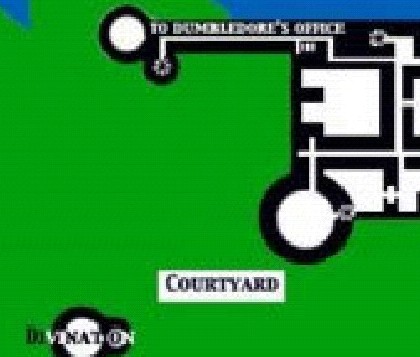 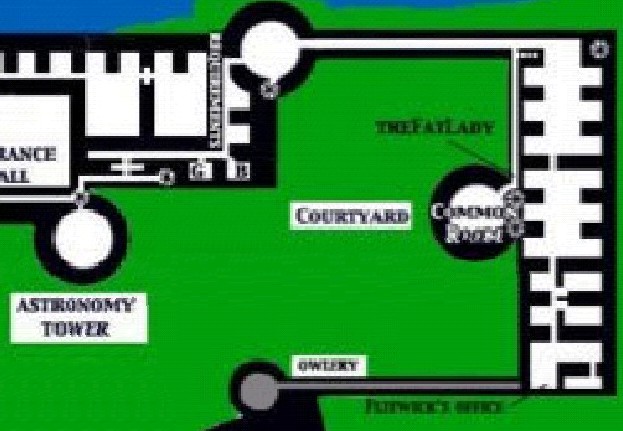 She might be going to the Gryffindor common room in the hopes of looking for anyone of the Weasley's with letters from the Order and hopefully a bit of additional news about Lupin.

Tonks might not have been (only) looking for Dumbledore

If Tonks was indeed simply looking for Dumbledore, there does not seem to be a reason why she would have ended up by the Room of Requirement. In fact when Harry points this out to her she doesn't give him an answer. However, it is possible that Tonks was using "looking for Dumbledore" as a cover for something else (or she had something else to take care of in addition to seeing Dumbledore).

In fact, this is implicitly suggested by Hermione when Harry describes the encounter:

"It's a thought," said Hermione slowly. "But I still don't know why she'd be bursting into the castle to see Dumbledore, if that's really why she was here...."

(It is true that at the end of the book Harry seems to think he figured out why Tonks came to see Dumbledore, but that does not necessarily mean that he is correct.)

If Tonks was there for a different reason, we don't know what it is. But if she was at the Room of Requirement perhaps that was actually her goal and she was thwarted by Harry's presence.

Alternatively, she may have ended up at the Room of Requirement by accident. She doesn't seem to be fully in her right mind at this point, so it is possible that when she saw that Dumbledore was gone she just started wandering aimlessly and that's where she ended up.

95
Why did Harry Potter intentionally lose the Resurrection Stone in the Forbidden Forest?
32
Why was Harry casting shield charms against Voldemort in the Battle of Hogwarts?
20
Was Harry supposed to watch Snape kill Dumbledore?
12
Why was the entrance to the Stone's dungeon hideout located on the third floor?
12
Why did Dumbledore not take Harry's warning that Malfoy was celebrating in the Room of Requirement seriously?
3
Why did Tonks want to visit Dumbledore?
8
What was Dumbledore's reasoning for placing the Mirror of Erised in a random classroom for most of the year?
26
Why was Hagrid expecting Harry to know of Hogwarts and his magical heritage?