How Human are Humaniform Cylons?

After the Cylon ambush, when the government asks Balter to build a Cylon detector, they have just recently learned there are "skin jobs" (as they call them) that look like humans, but they aren't sure how to find them.

Later, they know Sharon Valerii is a Cylon, but there's no indication they have examined her to tell how they can detect a Cylon. And, of course, Sharon Agathon, a humaniform Cylon, and Karl Agathon, a human, have a child, Hera, together. The second fact says that Cylons not only have genes, but that their genes are compatible with human genes.

Humaniform Cylons have blood, they have genes that have to be quite close to humans. They cry, they sweat, and the only three indications we've seen that they are different is when Leoben breaks down and is not able to function due to radiation at Anchorage Station and that they do, somehow, download to the nearest Resurrection Ship (if one is available) when they die. (As best I remember, it's never revealed how the Cylon detector works, but since Baltar needed a nuke to build it, it's possible it was based on observing reactions to radiation exposure.)

There's no indication they find wiring or other mechanical parts in them, but the other difference from humans seems to be that they can interface with the right wiring that connects to Cylon machinery.

Which leads to my question: Just how human are humaniform Cylons? They can't be too different (if there were wiring, it'd show up on x-rays, for example) and it would seem the main thing tying them to "the enemy" would be their memories and identity. Their bodies seem to be almost completely biological and not at all mechanical.

So how human are they? How do their bodies differ from humans?

The were completely human if you didn't look too closely - the Sharon known as "Boomer" lived a life in the colonies, probably underwent medical exams, and was never found out. Only Gaius's Cylon Detector ever detected her as not human, and that was scrapped as junk because he lied.

However, they were not completely human, and had the ability to interface with technology: 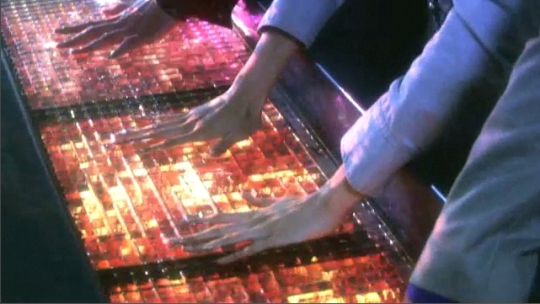 In addition to the above picture (which took place on one of the Cylon ships), one of the Sharons (Athena, I think) was able to insert wires into cuts on her wrist and interface with a colonial computer.

So there are differences. Most likely in the form of nanobots, so that the interface would work through the skin, and be retracted/removed/hidden when they were attempting to hide from detection.

EDIT with a quick note:

There's certainly going to be more differences, to explain being unable to have a child, and how they uploaded themselves to the Resurrection Hub on death. However, this is the only one I can remember being an explicit difference with a possible explanation.

In the original miniseries, Baltar has sex with Six, and during that, her spine lights up. Given that spinal lights never show up again in the series, I'm sure that it's something the writers wish they could take back.

I think that all humans in Battlestar Galactica are Cylons created by the Lords of Kobol who were humans. Eventually these Cylons rebelled, killed their (Gods) creators, and went into exodus to 12 colonies and Earth where they evolved further. There was an inherent flaw in the creation of Cylons by the Lords of Kobol that could never be undone, and that resulted in the perpetual cycle of violence between Humanoid Cylons and Mechanical Cylons. It is possible that undeveloped humans on a newly discovered planet, which Adama calls Earth, are in fact REAL humans from Kobol who, like their creations ages after, decided to abandon all forms of technology in order not to make the same mistake again. Cylons on the other hand, could not do that because of the inherent flaw in their programing. The only way to break the cycle is to merge the Creators with the Creation. In this way human genes could overwrite the Cylon flaw, and maybe break the cycle. "All of this has happened before. But the question remains, does all of this have to happen again?"

There were the multiple references to humanoid Cylons being "programmed". Unless that "programming" was entirely biological (maybe they figured out the biological constructs for memory, emotions, behaviors, etc. and how to create all of that in a human brain), then presumably their "brain" would have been artificial to some extent. Though now having said that, the whole thing with uploading to the Resurrection ship would have to imply something more artificial (though they never explained how they could effectively upload whatever was uploaded across vast distances of space instantaneously ... I guess that's where you just set logic aside for the good of the story).

Also, there's an episode there Sharon(?) interfaces with a fibre optic link by plugging it in her vein.

Certainly not too human then... :)

Apparently almost completely human, as biological reproduction with them is possible. While the producers of the series might have wanted to also re-explore this particular gem, it is clear that with the minor exceptions of telepathic communication and the ability to "resurrect" themselves, the Cylons were essentially biological human beings.

Not the answer you're looking for? Browse other questions tagged battlestar-galactica cylon or ask your own question.

14
What Kind of Government Did the Cylons Have?
7
Why Didn't the "Final Five" Program a Respect for Humans in Humaniform Cylons?
13
What are the differences between Humanoid Cylons and the Final Five?
14
How did Ellen and Boomer suddenly find the Colonial Fleet?
12
Why does Gaius Baltar lie about the results of his Cylon detector?
10
Why did the Cylons decide to occupy the human settlement?
6
Are they Cylons?
3
Why are the Final Five accepted by the robotic Cylons?
20
How were the Cylon Centurions re-enslaved by the biological Cylons?
3
Why didn't the Cylons just build a new resurrection hub?