Identify book: controlling the weather as a weapon in silent global war

I remember a book that was about a secret war being carried out by Russia against America (and with retaliation) that used weather as a weapon. One of the main characters was a weatherman that started to figure this out: there was no declared war, but epic floods would ravage Texas then Moscow would see a "blizzard for the centuries" and back and forth.

Given when I would have read it, the story must actually have been published in the 70s. It wasn't written by a big name author either.

The story went something like this: a TV weatherman started noticing that odd "freaks of nature" would afflict cities in the US and the Soviet Union. For example, there'd be a blizzard of unparalleled force that struck Moscow... then subsequently, there'd be unparalleled flooding in part of the US - or the worst tornado season on record... and back and forth it would go.

The weatherman discovered this and tried to unravel the real truth behind the events happening. In essence, the US and the Soviet Union were fighting a silent "weather war" against each other.

I distinctly remember a massive flood being part of the story in the lower Mississippi (I think) - I guess that rules out Texas, but could be Louisiana or Arkansas I'm guessing. I'm not as sure, but I think the story included massive blizzards in Moscow or Leningrad as well. I also seem to remember a love interest for the male lead, the TV weatherman.

I want to say it was called The Weatherman but I can't find it by that title anywhere. The Weathermakers by Ben Bova doesn't seem to be it either. 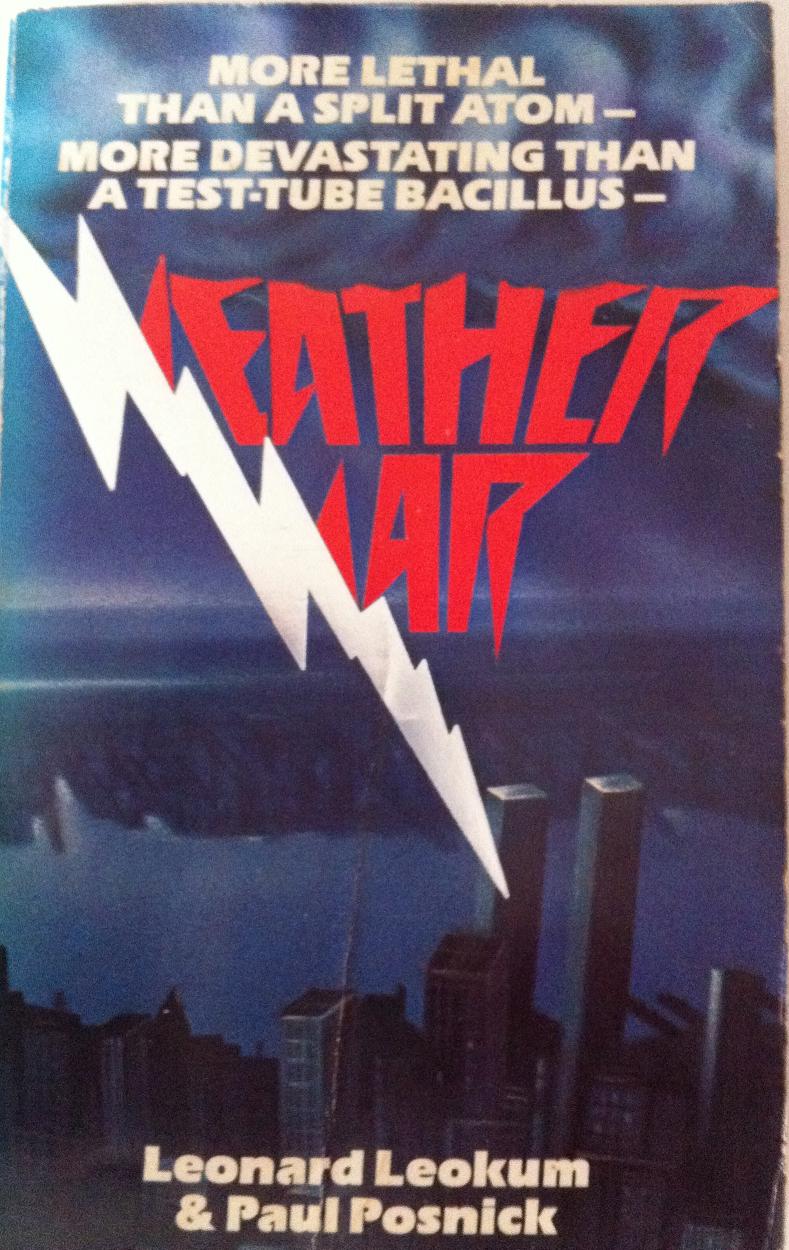 It featured a TV Weather reporter who started noticing some statistical anomalies with extreme weather events (tornadoes, heavy rain etc.) around the world and investigated them.

The reporter discovers that it is the USA vs Russia using weather control satellites to cause these extreme weather events in countries allied with the opposition. In the end the reporter is killed as he found out too much.

Here is a synopsis of that book from PaperbackSwap:

Floods wipe out 2,000 Los Angeles homes! — Killer snowstorm buries Boston! — Hurricane destroys coast of Miami! — Midwest declared drought disaster area! — The headlines scream the news and although the nation shudders at the impact only one man dares to suspect that there is something sinister behind the series of weather disasters.

His suspicions lead to a secret so frightening and so powerful that he becomes a marked man.

In a dazzling, racing drama of military intrigue and scientific suspense, a celebrated television meteorologist attempts to expose the most insidious conspiracy ever perpetrated on mankind!

That could be The Weathermakers by Ben Bova, the first book in his Chet Kinsman series. I'm afraid I no longer own a copy, and I can't find a decent plot summary online, but I know that the series as a whole was very much about a heating up cold war between the US and the Soviet Union.

The publication date doesn't seem to line up, but could it be The Weatherman, by Bull Marquette?

The Cuban Missile Crisis was a hoax. In October, 1962, idealistic George Blair is ready to start his career as a policeman, engaged to a social-climbing harpy who has his future mapped out, when the Cuban Missile Crisis intervenes, and throws George into an undercover assignment to derail a revolt of the U.S. military on the plains of Texas. The government hopes to quash this very real nuclear threat, and at the same time conceal it from the public by manufacturing -- with help from the Russians -- the trouble with Cuba. Playing his undercover role, George goes under the tutelage of a drunken TV weatherman, and discovers that the revolt is, itself, a smoke screen created to hide an impending catastrophe that will destroy not just America, but the entire planet. The threat can only be vanquished by George, and only if he falls in love with the most beautiful woman in Texas and, at the same time, ensures that the weatherman gets what is coming to him.

It involves the Cold War, has a weatherman, and appears to focus around Texas.

There is a story in the Arthur C. Clarke book "Time Probe" called the "Weather Man" by Theodore L. Thomas. Could this be it?