How is Kylo Ren's lightsaber able to have a cross at the hilt?

From Wookieepedia how a lightsaber works:

The weapon consisted of a blade of pure plasma emitted from the hilt and suspended in a force containment field. The field contained the immense heat of the plasma, protecting the wielder, and allowed the blade to keep its shape. The hilt was almost always self-fabricated by the wielder to match his or her specific needs, preferences and style.

It seems the Dark Lords of the Sith Empire were ultimately responsible for the advancement of lightsabers, replacing the belt-mounted power pack with a power cell within the hilt. An internal superconductor was introduced, which transferred the returning looped energy from the negative-charged flux aperture back into an internal power cell. With this modification, the power cell would only expend power when the energy loop was broken, such as when the lightsaber cut something, solving the power supply problem. According to the Tedryn Holocron, the Sith also created the schematics for the first double-bladed lightsabers.

High levels of energy generated by a high-output Diatium power cell was unleashed through a series of focusing lenses and energizers that converted the energy into plasma. The plasma was projected through a set of lightsaber crystals that lent the blade its properties and allowed for the adjustment of blade length and power output. The ideal number of crystals was three, though only one was required

Once focused by the crystals, the plasma was sent through a series of field energizers and modulation circuitry within the emitter matrix that further focused it, making it into a coherent beam of energy that was projected from the blade emitter. The blade typically extended about a meter before being arced by the blade containment field back to a negatively charged fissure ringing the emitter, where it was channeled back to the power cell by a superconductor, completing the circuit.

Okay so from all of these quotes here's how I understand a lightsaber to work. There's a powercell in the handle. The power is then focused through crystals that act as a lens. It is preferable to use three crystals but you can make a lightsaber with just one. Then the energy goes through an emitter matrix which further focuses it into a coherent beam. The projected beam goes out about a meter on average then arcs back by the blade containment field(which is somehow done with the force) back into the emitter, and then back to the powers cell, which completes a circuit.

This means that it's a one way shot, a straight line out. In addition it says that the Sith had to design a two sided blade, which I assume is a regular lightsaber connected with separate power cells and seperate crystals to create effectively two separate lightsabers that are connected at the hilt. We see G Canon evidence of this when Darth Mauls lightsaber is cut in half in "The Phantom Menace."

So how does Kylo Ren's lightsaber have beams coming out in a cross formation at the hilt? Does he have separate crystals to focus the beams out? Is it a containment field in an irregular shape, if so how is that done? I am confused and it's possible my understanding of how the fields that generate a lightsabers form are off.

Also as a side note if you feel like addressing it and it applies: Wouldn't the cross parts coming out of the hilt take up more energy and be more for effect then for purpose? If it needs additional power cells or a larger one wouldn't that make the lightsaber much heavier and more difficult to use?

How does Kylo Ren's lightsaber make that cross shape? 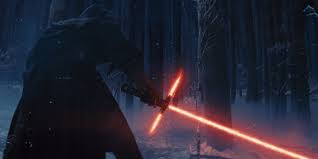 The Force Awakens Visual Dictionary provides a canon answer to this.

Kylo's lightsaber is an ancient design.

The Cross-guard blades, or quillons, are tributaries of the primary blade, all spawning from a cracked kyber crystal... 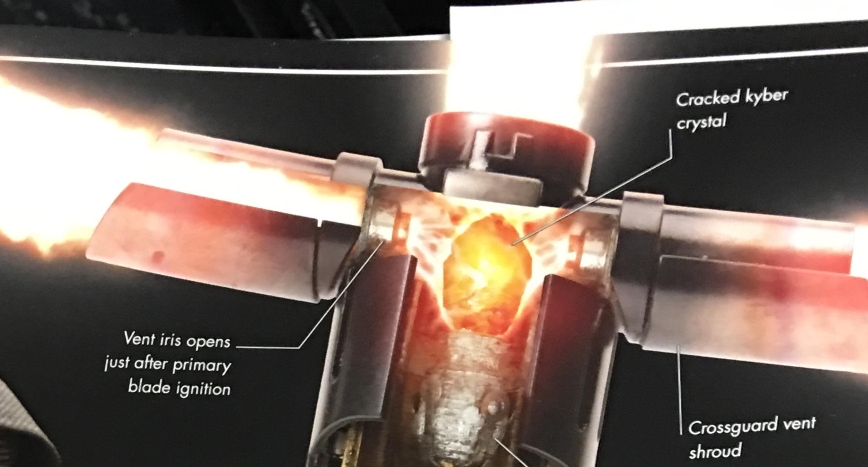 As there is the first time we see a weapon like this in the canon, obviously there is no canonical answer for this question yet.

However, the previous knowledge of lightsaber engineering applies to it, so we can assume how it works.

IMHO it's quite probable that there is a splitter crystal which generates the separate beams of the hilt. Those beams are reconducted through reflection, so they are send sideways and they take a significantly small amount of energy from the emitter (so they don't grow more than a few inches outside the hilt).

Probably, the engineering of this lightsaber is quite more complex and fragile than those of "normal" shape.

Since we dont know the answer yet to this question exactly, I will offer speculation based on the images I have seen and the brief snippets of this light saber in the trailers.

The cross beams seem to be much less restrained and controlled than a normal lightsaber blade to me. From what I see in the picture in Bardo's answer, as well as the trailers(I can add this later, cant get it at work) The cross beams feel more like "excess" energy. As in, the lightsabers blade is crudely made or "overcharged" and putting out too much energy to be contained in a normal blade structure, so the cross hilts allow that excess energy to release out the sides, which just happen to also have a use as a cross hilt, protecting the users hands from being cut off.

Kylo's lightsaber uses a kyber crystal that is cracked, and because of this it is unstable. You can see that the blades crackle and spark. The crossguards are actually vents for the crystal because it's raw power would probably break the lightsaber. The saber was put together by Kylo Ren and the quillons were probably put in that older medieval looking fashion because of his lack of training.