How do Mogwai or Gremlins Drink?

When a Mogwai or a Gremlin is exposed to water, it multiplies.

But how then do they drink?

They drink on the back, directly from the tap : 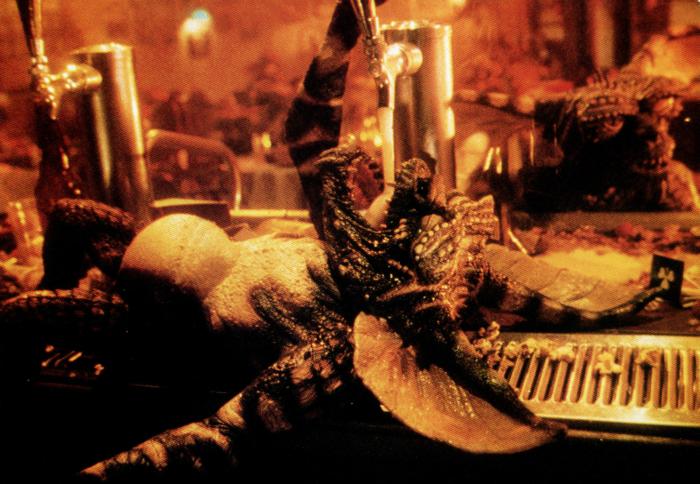 The only time we see Mogwai reproduce from water is when it contacts their skin. There is no indication that drinking water (or taking it internally) results in spontaneous reproduction. It is also possible that only certain parts of the Mogwai are affected by water (such as the main torso). The general rule to never get them wet would then likely come from the difficulty in only getting the safe part of them wet.

Because most all foods contain some trace amount of water, it is unlikely the carbon based lifeform would survive without it.

In the Gremlin film official novelisation, it's revealed that the Mogwai don't drink. Ever.

It's reasonable to assume that this is because of the severe risk of spawning and because mogwai are able to ingest all the fluids that they need from their food...

The kid looked at Rand pointedly. “I’m serious, mister.” he said.
“Sure,” Rand replied. “It’s just that animals need water to drink, right?”
“This one doesn’t.”
“You sure?”

Later in the same film we see Gremlins drinking alcoholic beverages so it's clear that they can imbide fluids (orally) without budding.

Not the answer you're looking for? Browse other questions tagged gremlins or ask your own question.

4
Is the Gremlins Board Game considered canon?
21
Gremlins, water, and snow
73
At what time can you start feeding Mogwai?
5
Do Mogwai in water maintain conservation of energy?
11
Where do Gremlins come from?
8
In Gremlins movie do Gremlins ever turn back to Mogwai?
11
Why is Gizmo the only good Gremlin?
8
How do Mogwai reproduce?