What exists beyond Westeros, North of the Wall and the Free Cities?

I went throught the five books and the TV series and just out of curiosity I wanted to ask if there has been mention by G. R. R. Martin about the existence of life beyond the map of Westeros, north of the wall and the Free cities:

I think you're asking what's North of the wall, so I'll mostly focus on that, but I've added a little at the end about other locations beyond Westeros and the Free Cities.

Drawing partly from my answer to Do lands other than Westeros suffer from long Winters and live under the threat of Others?, Westeros extends further north than other known continents. Here's a low res version of the latest official map. The landmass on the left is Westeros, the much larger land mass on the right is Essos where the free cities are. The Wall is across where the completely white section ("The Lands of Always Winter" and, closer to the Wall, the various lands where the wildlings live) joins the pale white section (The North): 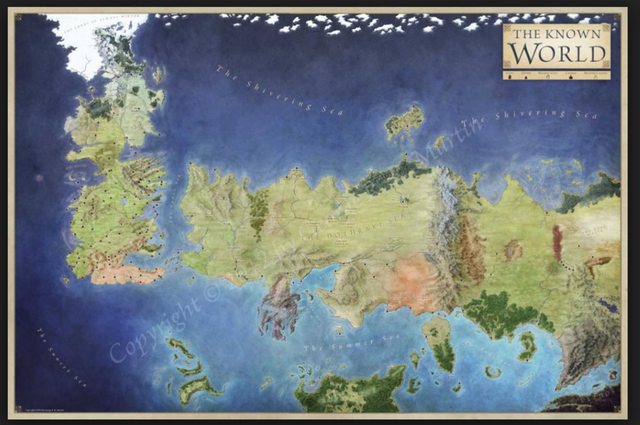 As you can see, there's nothing but sea and tiny ice islands north of Essos. There's that one island, Ibben, populated by Neanderthal-esque hairy humanoids who hunt whales, but it's not as far north as Winterfell.

As for north of the Wall in Westeros, you have:

the dead plains where nothing grew or lived

A Game of Thrones, Bran III

Beyond that, off the top of the map, the only clue I'm aware of is from the same dream of Bran's:

the curtain of light at the end of the world, and then beyond that curtain. He looked deep into the heart of winter, and then he cried out, afraid.

That's everything north of the Wall, which is what the question seemed to be asking for.

There's also plenty of interesting other lands south and east (no mention of anything to the west). The premise is similar to Medieval Europe - people in Westeros are aware of other, exotic, distant lands, and occasionally encounter people from them, but don't know much about them. Check out:

It is really, really unclear what you are asking here.. there is OFC mention of the other continents in both the books and the TV series. But in your question you ask for stuff that happens beyond Westeros map. Westeros is a continent. It is the seat of power for the Iron Throne and where the majority of the books and TV show take place.

The other continent Essos is where the free cities are. Yunkai, Quarth, Slavers Bay etc. Here is a map of the continent of Esos so you can see it.

And here is the map of Westeros. The wall is on Westeros, so is the free folk lands, so are the 7 kingdoms.

29
Does the Song of Ice and Fire take place in a hollow world?
43
What is the shape of the world of Westeros and do the Westerosi know?
37
How big of a deal is Westeros?
15
Do lands other than Westeros suffer from long Winters and live under the threat of Others?
1
Where is Valyria located in the world of Planetos?
2
Standard map of the whole realm with all cities in Game of Thrones?

37
How big of a deal is Westeros?
5
How cold does it get in winter?
137
What do people in Westeros eat during Winter?
14
Is Sansa and Tyrion's marriage still legitimate?
46
What makes the Free Cities "free"?
3
What is the in-universe reason that eastern Essos is not mapped?
5
What is the Northern equivalent to a Knight?
40
Why do people in the North take the Wall so seriously?
31
Has George R. R. Martin ever officially stated that the shape of Westeros was based on the United Kingdom?
62
Why isn't everyone flabbergasted about Bran's "gift"?