Can other species besides Vulcans do the Vulcan nerve pinch?

It's been a while since I've seen any of the original series, but I was wondering, can other species do the Vulcan nerve pinch? I can only remember seeing Spock doing it successfully. I was thinking I remembered Kirk trying it in an episode or movie but failing for some reason.

Since Spock, various other characters in the Star Trek spin-offs use the technique, including non-Vulcans. The first non-Vulcan was Khan Noonien Singh, later followed by others such as the android Data, the Changeling Odo, Voyagerâ€™s holographic Doctor, and the humans Jean-Luc Picard, Seven of Nine, and Jonathan Archer (though Archer was carrying the katra of the ancient Vulcan Surak at the time).

The nerve pinch has been used on Vulcans and the vulcanoid Romulans several times, showing that neither race is immune to the technique.

You can probably explain away most of these examples as non-typical beings (Khan was a super-genius, Odo being Changeling, Doctor was a hologram, Seven was ex-Borg, Data was an android and Archer - as stated - was carrying Surak's katra), that still leaves a perfectly normal[1] human Jean-Luc Picard, who presumably leaned it when he mind-melded with Sarek. (Picard did this in TNG: "Starship Mine" and Star Trek Nemesis). Here's the YouTube clip showing it:

- and yes, he's using it on Tim Russ, who played Tuvok in Voyager). Here's the screenshot from "Starship Mine" (from Memory Alpha): 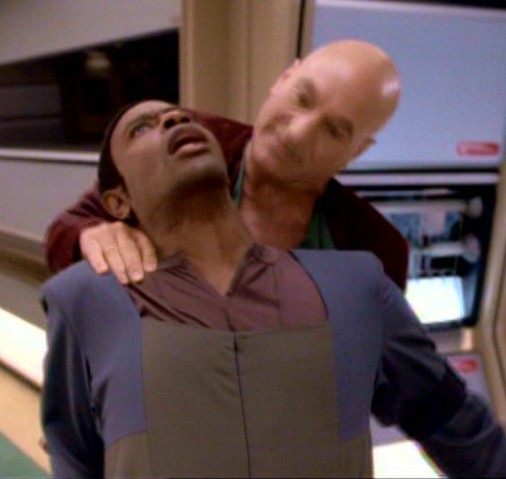 [1] For some definition of "normal"

9
Did Picard use a Vulcan neck pinch in Starship Mine?

54
When Did Vulcans Change from No Emotions to Buried Emotions?
6
What humanoid species are immune to the Vulcan nerve pinch and the mind meld?
9
Pon Farr in the new timeline
4
Can the Vulcan nerve pinch kill someone?
9
Did Picard use a Vulcan neck pinch in Starship Mine?
9
Do any other TNG-era Romulans lack brow ridges?
6
Did Spock help create the gene pool for Sarpedion?
18
Are there any species in Star Trek whose dietary requirements are different enough, that they couldn't survive on e.g. Human or Vulcan food?