I don't remember much about this movie but it's stuck in my mind and I would like to know what it is. I saw it on HBO in the early 80's, probably somewhere between 81 and 83. There is what I think is an alien that has some kind of weapon like a large throwing star that either attaches to or is embedded in his leg. He goes around killing people in a rural area, mostly at night. That's about all I remember. Help.

story-identification movie aliens
Share
Improve this question
edited May 12 '16 at 16:35

Could this be Without Warning? 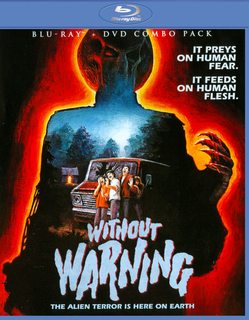 A father and son go hunting in the mountains. Before they can begin hunting, which the son does not want to do anyway, they are killed by flying jellyfish-like creatures, which penetrate their skin with needle-tipped tentacles.

Some time later, four teenagers, Tom, Greg, Beth and Sandy, hike in the same area, ignoring the warnings of local truck stop owner Joe Taylor (Jack Palance). A group of cub scouts is also in the area; their leader (Larry Storch) is also killed by the alien creatures, while his troop runs into an unidentified humanoid and flee.

The humanoid alien is throwing the disc-shaped creatures. The following is a trailer where you can see it throwing them (contains spoilers on the fate of one of the characters):

14
Help me identify this B-movie about plant-like aliens that crash land
12
Sci-fi Movie Identification - Humans stored alien in a big concrete block and then it escapes
7
Sci-fi movie identification: on TV in early 2000s or earlier - cannibal alien family
5
80's-90's sci-fi kids movie (possibly a live-action Disney), two alien girls stranded on Earth in a ranch/farm
6
80s/90s movie: teenagers go inside a crashed asteroid/craft, destroy alien eggs except one, alien parent goes on a rampage looking for its offspring
15
Old sci-fi/thriller movie centered around a pistol that causes blackouts/temporary amnesia with bursts of light
13
Animated Series: Alien black spider robot crashes on Earth
5
What's the name of this 80s SciFi Alien movie
7
Late '80s/early '90s scifi/horror movie about a group of young people dealing with an infection/virus that turns one of their friends into a killer