Why couldn't the Enterprise beam down the Argo(buggy)?

In Nemesis, when the away team is searching for the android parts, why couldn't they just beam down the Argo(buggy) instead of bringing a shuttle to take it down? They mentioned before about how there was an industrial society so they couldn't have the shuttle everywhere, (and ended up ignoring that rule anyway). Wouldn't it have been easier to just beam everything?

Although it's very tempting to blame the ion storm (the one that prevented the crew from beaming down)...

Geordi looked up from his station and shook his head. "Captain, I don't recommend transporting; that ion storm doesn't look very neighborly. It could head this way without much warning."

...the reality is that the Argo shuttle is simply too large to beam, even with the ship's cargo transporters. If the buggy was disassembled it would probably fall just under the max size that can be transported (5m x 2m x 2m), but certainly not with the rollbar, wheels and gun attached.

The conditions negate using the transporter for anything, because an away-team and the vehicles might be left stranded. Beaming down might not be a problem, but getting back might.

Transporting a Scorpion-class Attack Flier exceeds the specifications of the cargo bay transporter. So, site-to-site transportation was likely used for that (or it was handwaved).

IMO, with enough excess energy, you could S-t-S transport the Arggo's buggy. But you wouldn't if the ACB could become compromised at any point (or worse, the matter stream itself). I.e., an impending ion storm.

Obtaining or maintaining a transporter lock enables the transporter operator to know the subject's location, even in motion, allowing the beaming process to start more quickly. This is an essential safety precaution when a starship away team enters a potentially dangerous situation that would require an emergency beam-out. –Transporter

You don't beam down shuttlecraft. Their very existence in terms of the storytelling aspects of Star Trek precludes the capacity to beam something down to a planet's surface.

In case of an emergency, cargo transporters could be reset to quantum-level mode, making lifeform transport possible. One reason for such a reconfiguration was to expedite an evacuation of personnel. (TNG: "11001001")

Cargo transporters were mostly found inside the cargo bay of a starship or space station. On Level 97-C of the Spacedock-type Starbase 74, there were four cargo transporters. (TNG: "11001001") 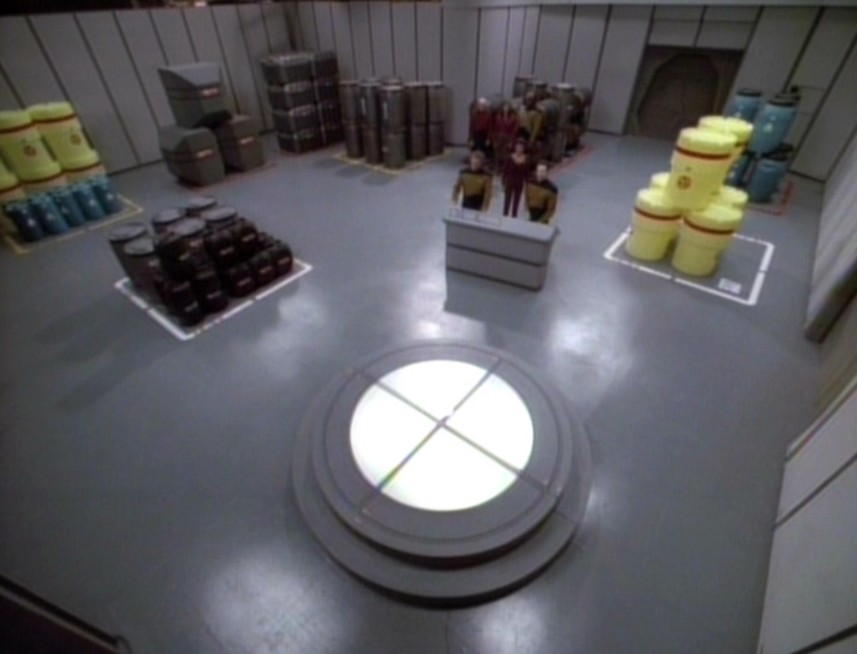 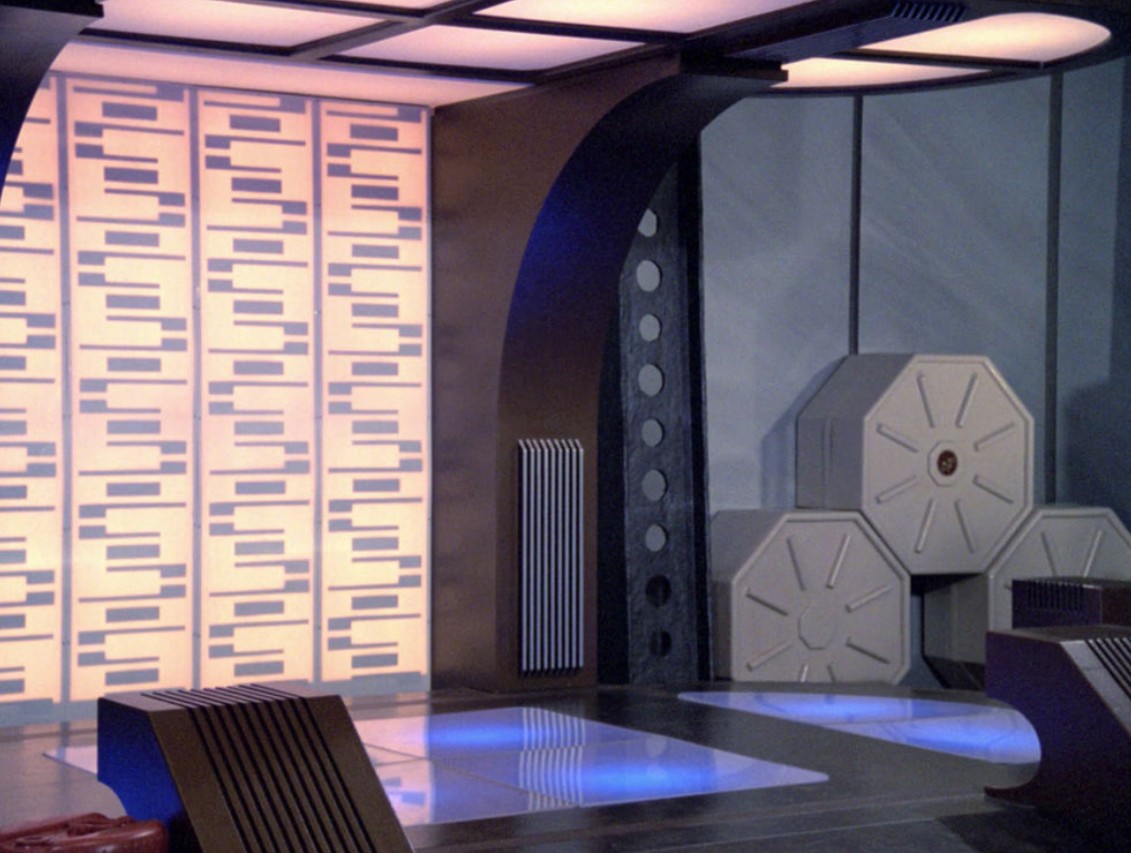 Both of these images show cargo transporters onboard the Enterprise. Neither are large enough to consider moving something as large as the Argo, a warp-capable heavy transport shuttlecraft.

The Voth city ship was massive and extremely powerful in comparison with Starfleet vessels – the Voth were able to beam the USS Voyager into a chamber inside their vessel which could clearly house many more starships. This transport was accomplished despite Voyager's shields being raised. The Voth were also able to take command of the ship's computer, shut the majority of systems down, and take primary power offline. The dampening field used to create this effect managed to render tricorders, communicators, and phasers useless.

UPDATE: In addition to the slight change in the question, I will address another issue, size of the transport area.

Actually, we've seen in Star Trek Voyager that shuttles can be beamed onboard (mostly during tough spots).

And even in Star Trek Nemesis, when both Picard and Data were on that Romulan fighter craft and escaped the Scimitar, the Enterprise-E beamed them onboard.

Transporting something the size of a 'buggy' (or a shuttle for that matter) wouldn't be an issue. It may have been a problem due to the incoming Ion storm, however, we've seen before that transporters can be modified to work under such conditions (funny how newer shows or movies ignore all those modifications though to increase the 'drama factor' as opposed to working with it).

I suppose we could say a shuttle was used in Nemesis to transport the buggy to the surface to minimise or avoid any potential issues the Ion storm could produce even with modified transporters. Also, they were under a bit of a time constraint, so not worth it to risk a transporter beam when the shuttle would be perfectly fine (Starfleet is big on health and safety).

Not the answer you're looking for? Browse other questions tagged star-trek star-trek-nemesis or ask your own question.

19
Is the “Enterprise” the Only Upside Down Ship in “Star Trek?”
17
Why did the tractor beam of the Enterprise crush the fighter jet of 20th century?
9
In TOS: The Enemy Within, why didn't the Enterprise use shuttles after the transporter broke down?
7
What are the in universe telltale indicators of an away beam down or beam up? What do witnesses experience?
6
Story in Star Trek novel - Shatner, Nimoy, etc beam to the real Enterprise
11
Why didn't Michael and Cpt. Georgiou beam down to the well?
32
Why couldn't Scotty beam Spock out of the radiation chamber in Wrath of Khan?