What happens if Superman is near a white dwarf star?

With the Superman lore, we know that light from a yellow star gives him his powers, light from blue stars makes him stronger, and light from red stars weakens him. However, what happens if he is near a white dwarf, or a neutron star? Has there been any evidence of Superman visiting a star system that wasn't red/yellow/blue?

Star color is determined by the surface temperature (which has a direct correlation to the amount of radiation it puts out) - What determines the color of a star other than temperature?

A Pulsar emits radiation, so if Superman were to be struck by its beam, it should give him something of a boost, since he is basically a radiation battery. Other, deader Neutron stars would presumably have no effect on him (or maybe it would kill him (speculation)).

I found some speculation on forums that the younger the star, the more powerfully it affects Superman. So a brand new star would make him Superman^3 or something, and completely dead star might kill him. However, I couldn't find anything to corroborate these claims.

During the Silver Age, the answer is "absolutely nothing".

In "Action Comics" #376, the Anti-Superman Gang has a contest of sorts, initiating four attempts on Superman's life. One attempt involved a ultra-sonic attack on his superhearing. Superman's solution was definitely outside-the-box...all the way to a white dwarf star.

I'm certainly not going to defend the stellar physics behind this sequence, but one white dwarf star encounter, as requested. 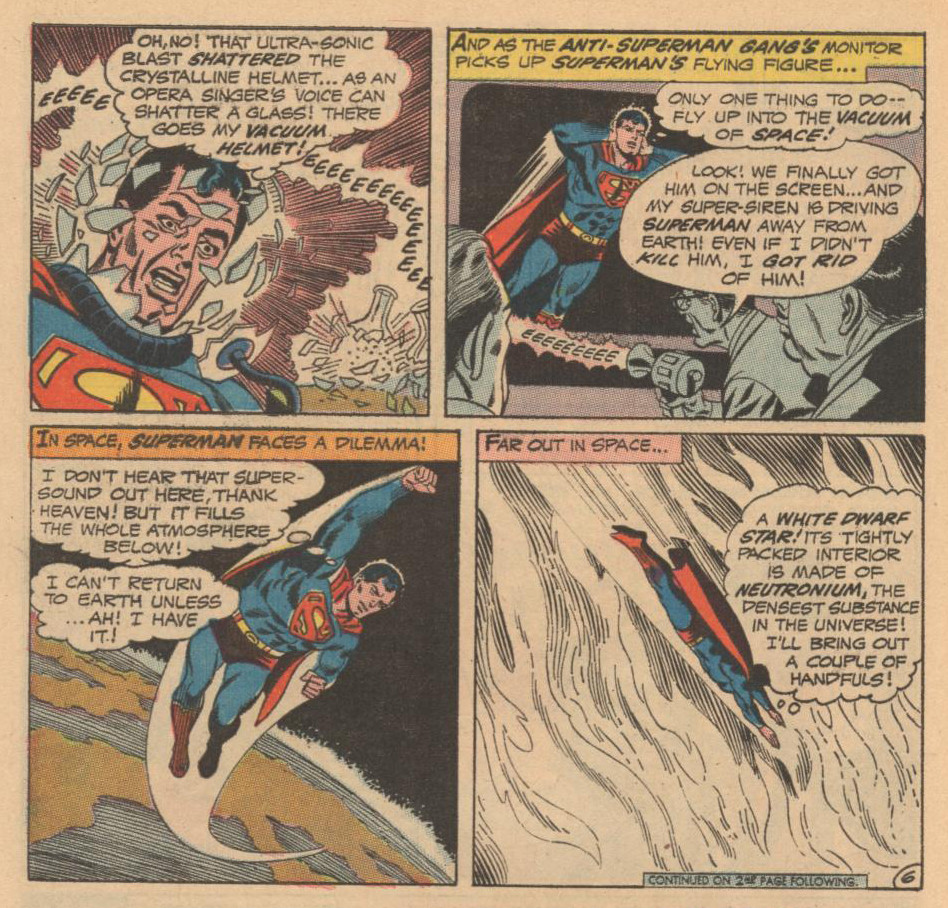 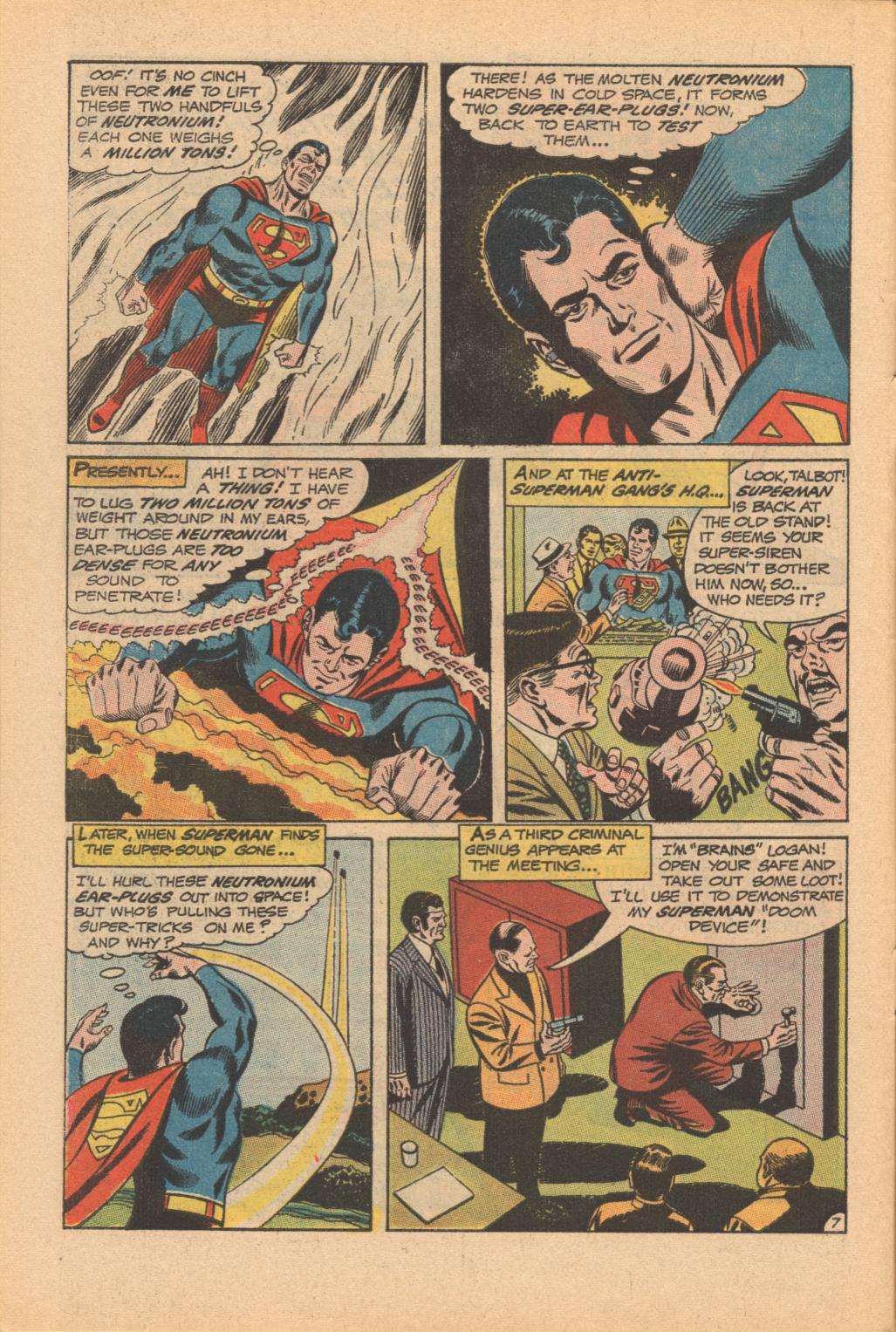 The one answer above is that I always thought logically when I grew up reading comics; if Superman gets his powers because of a difference in stellar radiation between the Red sun of his birth and a Yellow sun, then a Blue sun should really saturate him with even more energy...a Super-Superman.

I remember two instances where Superman has encountered different suns. In "Super Powers team Galactic Guardians", there was an episode where he encounters an Orange sun. Since it's radiation would fall between a Red sun and Yellow sun's, as expected, his powers were roughly half what he normally has on Earth.

The other instance I remember was in the book "Superman: Last Son of Krypton". When he's given an assignment (on a planet around Vega) by one of the (defrocked) Guardians, the ex-Guardian suggests he take some help because Vega is a Blue sun. He says: "You have reduced powers, Kal-El, on a planet whose star sun is blue. Your optical abilities are restricted and your invulnerability to physical assault is not as apparently limitless." So they made the answer a bit more complicated than just the color frequency change. (Additionally, though most people and substances from Krypton and Daxum become near-indestructible, there are exceptions, and it doesn't work for every planet orbiting a Red sun. Kryptonite for example is not indestructible, and can be shaped, molded, carved, etc.

The color of the star indicates it's age. A blue star is basically like a newborn baby. If Superman was exposed to a blue sun environment, he would be more powerful than Darkseid, and Darkseid is very powerful. A yellow star basically is an average star, and we all know what happens when a Kryptonian is exposed to yellow sunlight. Red star, well that's a dying star. Once upon a time, Krypton's sun was exactly like ours, as were its people. Over the billions of years of solar aging, the Kryptonians were evolved to the point where they were just like us under a red sun. Therefore, exposure to a red sun environment would make Superman as mortal as the next guy. If I had to guess what would happen when exposed to a white dwarf star, I'd say his powers would be taken from him permanently as fast as you can snap your fingers.

Actually, there is a direct mention of this. In Superman Earth 1 Volume 1, Tyrell, a Dheronian from the same system as Krypton, tells Superman that both Kryptonians and Dheronians obtain "different properties" depending on dwarf stars, white stars, blue stars, and yellow stars. He directly mentions that "pulsars and quasars give power beyond imagining", and that black holes consume them completely. Neutron stars aren't even mentioned, I'm afraid. 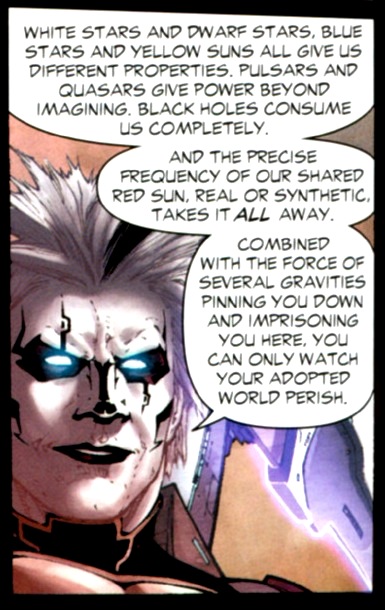 2
Do Kryptonians get powers from > 6000k suns?
1
What color suns has Superman encountered, and what effects did they have on him?

14
In the DC Comics Universe, What Happens to Earthlings Under a Red Sun?
13
Why doesn't Alan Scott's Green Lantern ring work on wood or plant material?
4
What happens after the events of All Star Superman?
7
Lock Superman Underground, how long till he loses his powers?
1
How old are Rhea and Lor-Gand?
4
Have any Superman stories dealt with his weakness to red solar energy through redshifting?