Why do so many Trekkies hate Star Trek Into Darkness? [closed]

I am a fan of Star Trek. I've watched most episodes of all the series (especially Star Trek: the Next Generation, and not counting Star Trek: Enterprise), I've seen the movies, I can even tell you how Captain Picard likes his tea.

I watched Star Trek Into Darkness, and I liked it. It certainly has its flaws, but overall I quite enjoyed it.

However, there seem to be purists who consider it one of the worst Star Trek movies ever, maybe even worse than Star Trek V: The Final Frontier.

What are some Star Trek-related reasons that a Star Trek fan would rank this film near the bottom of the list of Star Trek films?

Into Darkness contradicts prior Star Trek canon in disturbing ways and at the same time ends up lampooning elements of Wrath of Khan, a beloved Star Trek film.

I'm a Star Trek "purist", but also a film fan in general, and I believe the fundamental problem with Into Darkness is that it makes no sense. (Case in point: Why would Khan hide his friends in torpedoes? Why would he run off leaving them in weapons that will eventually be inspected...or even used?!)

But you asked for Star Trek-related reasons, and so I will give them to you.

"Transporter range" is a fluid concept in Star Trek, being whatever it needs to be for a particular episode. But it has never been quadrant-sized (unless you are the Iconians, but that's another story....) Into Darkness presents the idea that you can now just transport from Earth to Qo'noS (the Klingon homeworld, near the Alpha and Beta Quadrant border). They try to justify it with Scotty's transwarp beaming equations, but why did the same idea not develop in the prime timeline between Scotty's time and, say, the Next Generation era?

McCoy is a smart man in any timeline. Why would he not realize in the prime timeline that Khan's blood can bring the dead back to life? (Or maybe the question is: why would McCoy in the reboot timeline be injecting dead Tribbles with Khan's blood for fun? What's up with that?) The answer for why we never saw this before is that the idea is silly. In Into Darkness, death is irrelevant now. Many fans found this upsetting.

Great lengths were taken to trick the audience before this film came out. Orci, Kurtzman, Abrams, and Lindelof had settled on the idea that they would parallel / remake Wrath of Khan to some extent, but didn't want the viewership to know about this until they were in the cinema on opening night.

To do this, they constructed the character of "John Harrison", played by Benedict Cumberbatch who looks nothing like Khan in the prime timeline (played by Ricardo Montalban). Cumberbatch and others attached to Into Darkness gave responses that were technically true but not spiritually true during interviews, in order maintain the ruse. For example:

"I play a character called John and not that other name," Benedict continued. "It’s interesting. Speculation is speculation and that’s all fun."

But despite all of the statements to the contrary, Cumberbatch's character was indeed Khan. Recall that Khan was born in the 20th Century, before the timelines diverged, and so there is no reason for drastic changes of appearance. Some things are always in the eye of the beholder, but they really look nothing alike. Putting Cumberbatch's popularity and acting credentials aside, it's not crazy to think he was cast at least in part to throw off fans and ensure the surprise of the eventual Khan reveal. That's not a good motivation to cast someone. 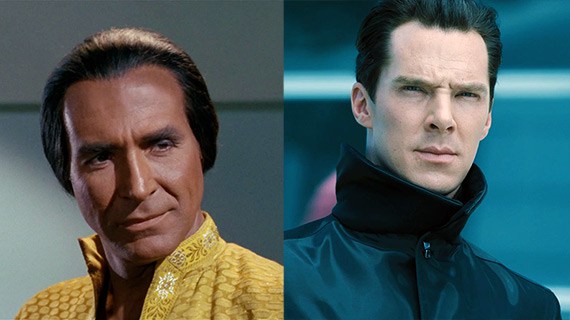 Furthermore, the Khan character in Into Darkness has confusing motivations, from the point of view of long-term Star Trek fans. This new Khan was overly emotionally concerned with his "family" (other genetic augments) and cried over his inability to protect them. It's hard to assess this point without veering into opinion, but this doesn't seem to be a sound interpretation of Khan as we knew him in "Space Seed" and Wrath. This was a man who ruled a quarter of the world with an iron fist. The Khan of the prime timeline, while displaying respect for his fellow augments and measured affection towards his lover Marla McGivers, was never shown to be moved to tears over their plight, even at the height of their despair on Ceti Alpha V as he recounted the deaths of many of them in addition to that of his wife. In that same scene in Wrath, he reaffirmed how the other augments were to "live and die by my command". This new Khan, who is supposed to be the same man who fought through the same Eugenics Wars and experienced the same exile from Earth, seemed as if he might not sacrifice a single one of them for any reason. 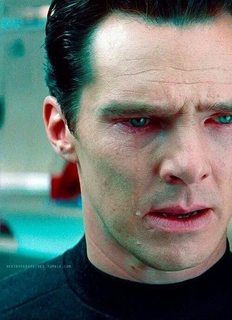 Overall, the mid-movie Khan-reveal gambit did not pay off and fans were left debating whether or not the portrayal was accurate instead of focusing on the plot.

Finally, Kirk's death scene came off as a parody of Spock's in Wrath of Khan, especially with the Khan scream. It simply didn't work, nor was there any in-universe reason for them to repeat exact lines from Wrath at a different time and under different circumstances.

JJ Abrams himself has expressed regrets about how Into Darkness played out. In this Buzzfeed interview

But by the time we started shooting, and this was literally at the very beginning of the shoot, there were certain things I was unsure of.

And I found this comment to be quite astute (emphasis mine)

"I felt like, in a weird way, it was a little bit of a collection of scenes that were written by my friends — brilliantly talented writers — who I somehow misled in trying to do certain things. And yet, I found myself frustrated by my choices, and unable to hang my hat on an undeniable thread of the main story,” Abrams said. “So then I found myself on that movie basically tap-dancing as well as I could to try and make the sequences as entertaining as possible. Thank god I had the cast that we have, who are so unbelievably fun to watch. And an incredible new villain in Benedict Cumberbatch."

Not the answer you're looking for? Browse other questions tagged star-trek star-trek-into-darkness star-trek-reboot star-trek-movies or ask your own question.

42
Are there any people of Indian descent in Star Trek?
29
What was the general critical reaction to Star Trek: The Motion Picture?