Why were they not allowed to use this seat on the Enterprise while in a spacedock?

In Star Trek V: The Final Frontier, Sybok captures the Enterprise and confines Kirk, Spock and Bones to the brig.

"Do not use while in spacedock"

Although at this point its not clear what the sign relates to.

Shortly afterward, Kirk pushes a square metal button under the sign and a seat slides out of the wall.

Why exactly are they not allowed to use this seat while in a spacedock? What could possibly happen? 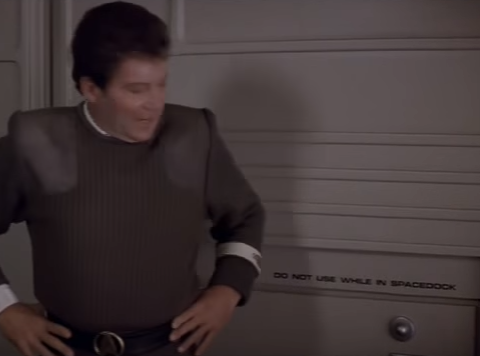 In this instance there are a few things going on in the scene, some more obvious than others.

Kirk is siting on a closed toilet. The implication here is that the head (toilet) in the brig vents directly into space. If it's used while in spacedock it will cause mess to the landing platform/connectors.

Since the 1950s and 1960s, American TV censors have valiantly fought to guard public virtue by keeping toilets off the airwaves, demanding that any visual indication of toilets (or even the sound of flushing) be removed from shows. Star Trek was one of the shows affected, leading to the total absence of toilets on the Enterprise.

After being faced with decades of questions about where Kirk and crew go to the loo, Director Bill Shatner evidently decided to include a scene where his character (Kirk) is quite literally sitting on the toilet to deliver his lines. Rather than labeling it "TOILET" they've followed a convention used on trains of labeling the toilet but not as a toilet

You can clearly see that it seats only one and there is a clear line marking the "lid". The next compartment over Kirks right shoulder houses the sink.

Not the answer you're looking for? Browse other questions tagged star-trek uss-enterprise the-final-frontier or ask your own question.

37
Αre there bathrooms on the Enterprise?
3
How did Sybok get to Nimbus III?