Why did Luke leave Owen and Beru's remains?

As most users likely know, in Star Wars: A New Hope¹, Luke flees Obi Wan Kenobi's cave when he realizes his Uncle Owen and Aunt Beru might be in danger from the Imperial stormtroopers, who are searching for R2-D2 and C-3PO. Luke arrives back at the farm and finds Owen and Beru's skeletal remains; they have indeed been brutally murdered. The Wookieepedia page on Owen Lars says much the same:

During the early years of the Galactic Civil War, Owen and Skywalker purchased the droid R2-D2, who, unbeknownst to them, possessed the plans for the Death Star, an Imperial superweapon. Soon after, Imperial stormtroopers tracked the droid to the Lars homestead, where they interrogated and murdered Owen and Beru. When Luke found his family was killed, he left Tatooine with Kenobi to train as a Jedi, joining the Rebel Alliance and destroying the Death Star in the Battle of Yavin.

Why did Luke just abandon Owen and Beru's remains? Both the Wookieepedia and A New Hope (the movie) suggest that Luke discovered his dead aunt and uncle, but then immediately left with Obi Wan without taking care of his aunt and uncle's remains. We certainly see no grieving process on Luke's part, and while I understand the story isn't meant to focus on that, that scene in the movie did make me curious. Do any of the novels address this question, or perhaps the TV series (although I suppose the Clone Wars preceded Luke's era ...)? Does Luke's canon characterization lend itself to leaving loved ones' bodies exposed and abandoned after death?

The Wookieepedia also notes that Owen (presumably) helped to bury Shmi, and later his brother Cliegg, on the farm:

Once Owen introduced himself and Beru to Anakin, Cliegg told the Jedi about Shmi's kidnapping, telling him that she was dead. Anakin, refusing to believe this, borrowed Owen's swoop and tracked down the Tuskens; the next day, he returned with Shmi's corpse. The Lars family buried Shmi outside their home and held a quiet funeral.

Padmé received a very grand funeral, so we know end-of-life ceremonies and traditions aren't unheard of in Star Wars canon. So, yes, I'm curious if there's a canon explanation for Luke's behavior. If not, subjective answers in the spirit of Star Wars canon are welcome.

¹ My most favorite movie ever!

Looking over an early version of the script, it seems that there’s nothing to indicate that Luke did not bury or burn Beru and Owen’s remains.

The scene where he sees their bodies ends thus:

Luke stumbles around in a daze looking for his aunt and uncle. Suddenly he comes upon their smoldering remains. He is stunned, and cannot speak. Hate replaces fear and a new resolve comes over him.

After that, we switch to Darth Vader, and then back to Obi-Wan burning the Jawas. Then, next thing you know, they’re going to Mos Eisley. Watching A New Hope confirms this. The novelization follows the same order: Luke despairs, switch to Vader and Leia, switch back to Obi-Wan burning the jawas, There is no proof that Luke did not deal with their bodies in the interim.

That said, if he really didn’t deal with their bodies, there’s a plausible reason. From the novelization:

“Damn your Force!” Luke snarled with sudden violence. Now he turned and glared at Kenobi. There was a set to his jaw that belonged on a much older face.
“I’ll take you to the spaceport at Mos Eisley, Ben. I want to go with you—to Alderaan. There’s nothing left for me here now.”

It may have been that once they were dead, he felt no further attachment to their bodies. Note that Obi-Wan’s concern for ceremony is described as “archaic”:

Working together, the two droids helped Kenobi throw the last of the bodies onto the blazing pyre, then stood back and watched the dead continue to burn. Not that the desert scavengers wouldn’t have been equally efficient in picking the burned-out sandcrawler clean of flesh, but Kenobi retained values most modern men would have deemed archaic. He would consign no one to the bone-gnawers and gravel-maggots, not even a filthy jawa.

He might also have been unable to retrieve their bodies, as discussed in another answer.

Now, in Legends, Luke did leave them behind, and buried their bodies after the Battle of Yavin, as detailed in the comic Star Wars 7. But in canon, he did not necessarily just leave them lying around.

Another conjecture answer as to why he might not bury them comes not from Star Wars, but from the Last of the Mohicans -

Upon finding the homestead of very close friends slaughtered by a Huron war party, Hawkeye is criticized by Cora Munro for his "cruel indifference" when he wants to move on, without offering them the dignity of a Christian burial. Hawkeye angrily turns on Ms Munro -

Miss Munro, they were not strangers... and they stay as they lay.

It is later explained that disturbing the scene would be an obvious sign to anyone following them or looking for them that they had been there.

Moving back to Star Wars, clearly, at least to Obi Wan, the people who slaughtered Luke's aunt and uncle were looking for the droids and were probably, after these events, looking for Luke. The conscious decision could have been made to minimize any hints that might put the troops onto their trail.

The film's official novelisation suggests that he saw the bodies inside the entrance hall and was unable to recover their remains due to the heat and smoke. There's also the suggestion that he simply found the whole thing too unpleasant to contemplate.

Those holes had been his home, the only one he had ever known. They might as well have been throats of small volcanoes now. Again and again he tried to penetrate the surface entrances to the below-ground complex. Again and again the still-intense heat drove him back, coughing and choking.

Weakly he found himself stumbling clear, his eyes watering not entirely from the smoke. Half blinded, he staggered over to the exterior entrance to the garage. It too was burning. But perhaps they managed to escape in the other landspeeder. “Aunt Beru … Uncle Owen!” It was difficult to make out much of anything through the eye-stinging haze. Two smoking shapes showed down the tunnel barely visible through tears and haze. They almost looked like—He squinted harder, wiping angrily at his uncooperative eyes.

Then he was spinning away, falling to his stomach and burying his face in the sand so he wouldn’t have to look anymore.

That being said, with the exception of the (decidedly ropey) Larry Weinberg junior adaptation, there's nothing in any of the official novels, comics, factbooks or that particularly indicates what he actually did with the bodies. All signs point to him having left them, but nothing proof positive either way.

Luke jumped back into his landspeeder and took off. The landspeeder raced all the way to the farm. But the trip seemed to take hours. At last, up ahead, Luke saw the farm. Or what was left of it Smoke filled the air. He leaped out of the landspeeder and ran toward the flames. Then he stopped. It was too late, he knew. There was nothing left to keep him here now. The uncle and aunt he loved so dearly were dead.

The Scholastic Storybook also indicates that he may not have wanted to remain in the vicinity due to the likelihood of Imperial forces doubling back. 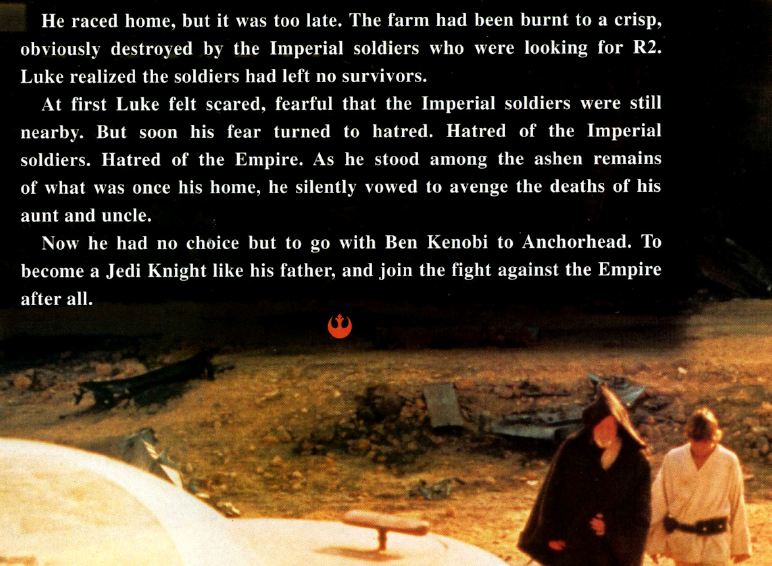 The posted answers are absolutely correct that there is nothing that indicates one way or the other whether Luke buried his aunt and uncle. It's completely open to interpretation.

However, assuming he did not bury them (which I believe is the case, now that I've thought about it), there is a simple explanation for why not: Shock.

This is a young man whose life has just been turned upside-down multiple times in a very short period of time, culminating in the death of the only parents he's ever known. He cannot possibly be thinking clearly. Quite possibly (even probably) the only thing he could think of to do was to return to the one remaining parental figure he knew: Obi-Wan. The idea of burying his aunt and uncle may not even have occurred to him, assuming that this was even an appropriate funeral practice for Tatooine.

This is entirely conjecture.

We see three cases of funeral pyres in the Movies. Qui-Gon Jinn, The Jawas and Vader/Anikin. I don't know what happens to Padme after the ceremony, but again cremation of some sort would be likely, otherwise at some point the ruse with the twins could be discovered at a later date.

Uncle Owen and Aunt Beru were already being burned. If cremation is acceptable, extinguishing a burning copse just to bury it wouldn't help in the process of grieving. It would only increase Luke's trauma.

Lets face it once the buzz of blowing up the death star wore off Luke would have a lot of things to deal with. It would almost be enough to make some go of to some remote world to live as a hermit.

"... Luke flees Obi Wan Kenobi's cave when he realizes his Uncle Owen and Aunt Beru might be in danger..."

Is this some kind of Mandela test? Luke recognized the threat to his family when he glanced at the droids while investigating the aftermath of an assault on Jawas. He didn't flee Kenobi's cave.

As to the question, it is plausible that Luke figured that dallying to process the corpses could place his own life in danger, since the Stormtroopers were obviously in the area. Also, seeing what the Empire was willing to do in its droid-capturing mission may have further clued him in to their importance. Thus he might have decided that he should immediately return to Kenobi and help him escape Tatooine with the droids.

16
Who decided to burn the Jawas, and why?

35
Why doesn't Owen Lars recognize C-3PO during ANH?
22
Why would Owen and Beru even consider allowing Luke to join the Imperial Academy?
22
Did young Luke learn of his grandmother's burial at the Lars homestead?
29
Do Aunt Beru and Uncle Owen know that Anakin Skywalker is Darth Vader?
15
Did Luke ever try podracing?
9
Had Luke Skywalker been adopted by Owen and Beru?
9
What was the original relation between Luke Skywalker and his aunt and uncle?